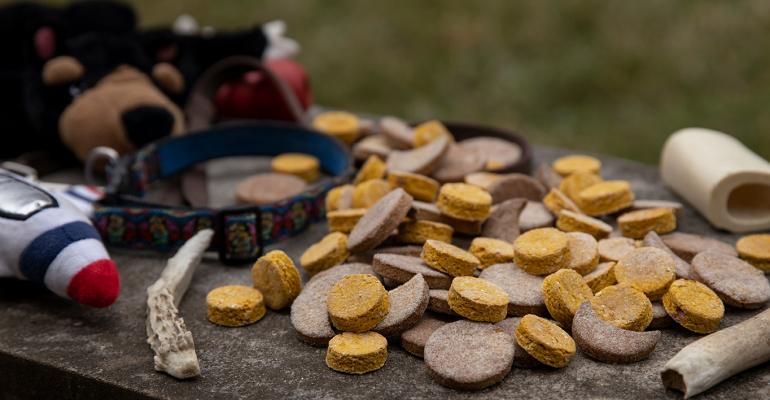 Mizzou chef’s new recipes have gone to the dogs

You’ve heard of Bobby Flay making treats for his cats, right? Meet Eric Cartwright, the University of Missouri chef who crafts cookies for canines on campus.

University of Missouri Executive Chef Eric Cartwright, CCC, is a chef who loves his canine friends. He’s got four dogs at home, and they’re part of the tasting committee for the dog treats this chef has recently created.

The project stemmed from a collaboration between the culinary team and Mizzou’s Campus Activities Program Board. The two groups partnered a lot during the past year with live Facebook cooking demos to help the campus community stay connected during quarantine.

Kathy Murray, the staff member who oversees the programming board, connected with Dr. Tim Evans from the veterinary school and introduced him to Cartwright. From there, the tails of creativity started to wag.

No need to jazz up these recipes with trendy seasonings, either. Cooking for dogs is best kept simple, Cartwright says. “We try to keep it pretty plain for dogs—avoiding sodium as much as possible. I think they may appreciate some extra ‘love’ in the vittles, but it isn’t good for them.”

Prior to the live cooking event where Cartwright introduced the treats, about 10 dogs—staffers’ dogs and Cartwrights’ own—served as taste testers.

You won’t be able to find these treats in stores, but Cartwright says the team is hoping to bring back the dog treat cooking series later this year for the holidays, a great handmade gift for furry friends.