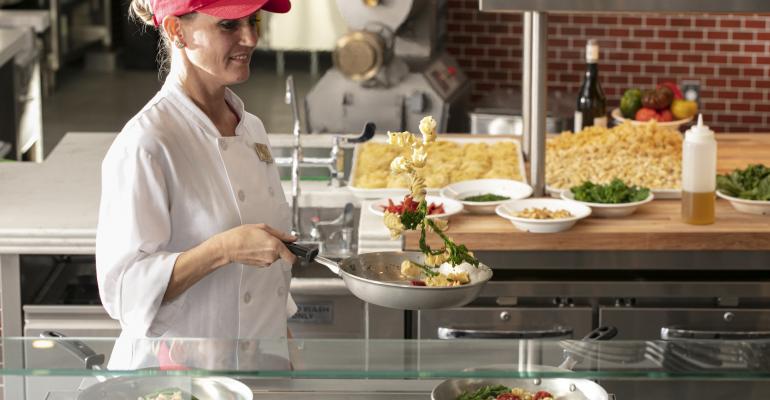 Cornell University already boasts prestigious and very highly rated hospitality, food science and agriculture schools, as well as a dining program that is a perennial presence in the Top 10 of the Princeton Review’s Best Campus Food listing and other college food rankings. So what can be added to up that already elevated game?

How about Morrison Dining, a 58,230-sq.ft. food hall style complex with 11 micro restaurant concepts and, sitting in the middle of it, a 2,400-sq.ft. food lab that melds the school’s dining service and academic missions through a collaboration between Cornell Dining and the Division of Nutritional Science.

“I could not be more proud of the entire Cornell Dining team in the planning and execution of Morrison Dining,” says Dustin Cutler, executive director of dining services. “This project’s scope is beyond anything our organization has seen, and I am very excited for the opportunity for this team of talented culinarians, managers and front line associates to shine.”

Named for Pulitzer and Nobel Prize winning alumna Toni Morrison, Morrison Dining opened at the start of the spring 2022 semester but operated on a takeout-only basis for the first two weeks due to a COVID surge on campus, somewhat of a blessing in disguise as it permitted a form of soft opening to ramp the operation up and let the staff get a feel for it. Full service commenced on Feb. 7, allowing students and other members of the campus community to take full advantage of the eye-catching ambiance, which includes an almost exclusive focus on to-order dishes and more than a thousand seats for eating onsite.

The ratio has been running about 95% dine-in since, with only a few takeout customers, says Cutler. He says the main impact of the change to onsite dining was felt mostly in the back of the house and the dishroom as service went from all disposables to china and flatware.

“With the design of the facility that encourages adventure and going from platform to platform, sampling the different foods, it tends to stack up plates, especially in an all-you-care-to-eat facility,” he explains. “That and being somewhat understaffed, we really felt the pressure when we first made the switch.”

Other tweaks brought on by the shift to onsite dining was readjusting the queueing spaces at the more popular stations so they wouldn’t hamper the adjacent stations or seating, and refining production schedules to meet demand fluctuations in the production and commissary kitchens also located in the complex.

Morrison Dining is part of a larger North Campus Residential Project intended to provide enough on-campus housing (some 2,000 additional beds) to implement a two-year residence requirement while providing attractive and appropriate dining and social spaces such as a fitness center, an artificial turf recreation field, common spaces and multi-purpose rooms for those students.

“Planning for the opening of Morrison Dining was a monumental task that could not have happened without the efforts of our entire team,” Cutler notes. “Especially impressive is the fact that the team accomplished all of this—and a huge hiring and onboarding push—during a global pandemic.”

The centerpiece of the North Campus Project’s new dining amenities, Morrison Dining incorporates not only an extensive front-of-the-house residential dining operation but back-of-the-house production kitchens—including commissary operations—and a catering operation. The integration of these three operations in one facility gives Cornell Dining the ability to enhance collaboration and efficiency among them.

A separate retail outlet called Crossings Café is also located in the Morrison complex, serving salads, panini and signature sandwiches, breakfast sandwiches, smoothies and specialty coffees and teas, while a second one, called Novick Café, is planned for opening later this year.

The food hall itself is divided into four directional quadrants, with each quadrant also incorporating separate dining platforms.

The East Side Market quadrant incorporates a salad bar serving both daily composed salads and a “build your own” component, the plant forward and major-allergen-free Flat Top Grill that is Cornell Dining’s first dedicated vegan station. Also part of this quadrant is Fruit/Juice/Smoothie, serving fresh fruit, smoothies, infused waters and lemon and limeade.

“We’ve heard from students who are looking for increasingly plant-based options at mealtimes,” explains Cutler about the need for incorporating these stations into Morrison Dining’s concept mix. “What is most impactful about the East Side Market, as we refer to our vegan grill and salad bar, is the option to truly customize your own ‘plantiful’ bowl. We did the math—there are over 500,000 unique combinations available at our salad bar, which features a host of grains, greens and legumes.”

Nearby, the West Side Grill quadrant has the Iron Grill station with its classic American breakfast and themed bars for lunch and dinner; Wok, with themed menus based on regional Asian cuisine as well as global breakfast specialties and an expansive noodle bar with 15 different vegetable topping options; a rotisserie; a traditional hot line with comfort foods and classic favorites; a wood fired grill serving composed small plates; and Plancha with its grilled veggies and fresh market fish.

“When the layers of rotisserie ovens, the wood fire grill and the Plancha grill start up at night—and they’re only used at night—they draw students who just stand around to watch us cooking,” Cutler observes.

Finally, the South End quadrant is the dessert/sweets area, featuring Cornell’s famed Cornell Dairy ice cream along with waffles made with house-made batter and crepes with a series of creative fillings.

“Student really appreciate that we didn’t make these stations an afterthought,” Cutler observes. “Oftentimes, it’s a request from students to have these on your campus, so you have to kind of retrofit them in. For us, it was very intentional to make the kosher and halal stations fit into the overall scheme and plan of Morrison Dining.”

Serving as kind of a centerpiece to it all is Discovery Kitchen, the collaboration between Cornell Dining and the Division of Nutritional Science, which is a modern, well-equipped and multi-faceted space designed for special events, student coursework, recipe testing/development and the professional development of staff.

“One of the most unique parts of Morrison Dining is the potential it brings to connect academics and the residential experience,” explains Cutler. “Our partnership with the Division of Nutritional Sciences to operate the Discovery Kitchen is really the first of its kind for our program, and we are really excited to explore the potential for academic coursework to intersect with the culinary development of our team and program.”

For students, Morrison Dining’s food hall design provides multifaceted seating areas in which guests can explore and find full meals at the individual platforms or pick and choose from the nearly endless number of options and ingredients. The seating is arranged intentionally to create micro-restaurant experiences, each with its own look and feel while the design supports community, collaboration and discovery for the campus population.

In the first month of full operation, participation has been running about at projections, Cutler says, noting that it did 5,500 transactions on a recent Sunday, when two meal periods—brunch and dinner—were served.

“We’re also getting outstanding feedback from our students,” he says. “They appreciate the facility, the design, how we have integrated the equipment in the space and the seating as it nestles around the 11 different platforms.”

Customers aren’t the only ones impressed, he adds. “Our staff is really impressed with some of the efficiencies we’ve built into the facility and how we’ve really showcasing our culinary capabilities. Highlighting our staff was really important to us.”

Cutler admits that Morrison isn’t yet operating to its full potential due to labor constraints, even though the department hired an additional 110 individuals to prepare for Morrison Dining’s debut. For instance, the pasta station, intended to offer customized dishes every day, sometimes has to default to batch cooking at the station, while the pizza station is currently only doing big pizzas and serving slices as opposed to its goal of offering customized personal pizzas that are made to order.

However, “for the most part the facility is being used [as intended],” he adds. “The good news is that we have been able to present the food in a just-in-time cooked way that’s transparent. The majority of the stations are open on a daily basis and there are no seating restrictions, so our student guests are experiencing a normal dining situation.”

That dining situation—hardly “normal” given the array and quality of choices—is an integral part of Cornell’s continued elevation of the campus experience, he adds.

“I’ve always been a firm believer that food is at the heart of a community, and this dining facility sits in the center of the sophomore village,” he says. “It was very intentional to leverage this space to enhance collaboration and community efforts while weaving academics into student campus life, and this facility will give us the vehicle to be able to do those very mission-critical things here at Cornell University.”