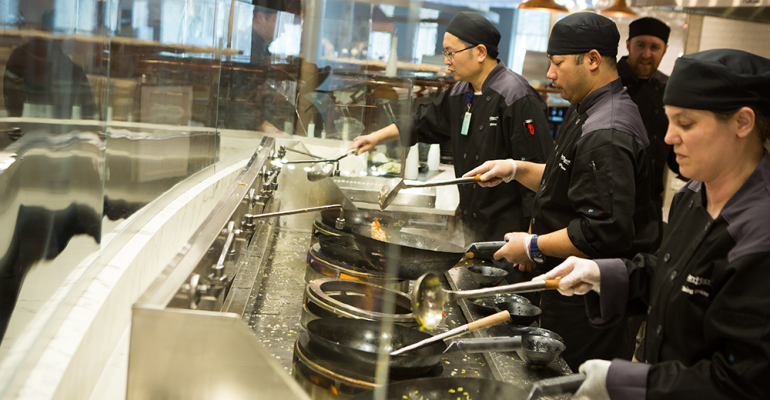 E pluribus unum—“out of the many, one.” That’s a Latin phrase often used to describe America’s melting pot tradition of blending cultures. But it’s just as accurate to describe what has been happening to the campus dining program at Mount Holyoke College, a liberal arts college for women located in South Hadley, Mass.

Some years ago, Mount Holyoke embarked on a plan to consolidate its six scattered residential dining halls into a single venue. That project was completed and opened for business this past January as part of Mount Holyoke’s new Community Center, which also incorporates a variety of gathering spaces, the offices of the Division of Student Life and a performance space. More recently, this fall saw the debut of a campus pub and a c-store in the facility, replacing two now-shuttered retail outlets located on other parts of the campus. 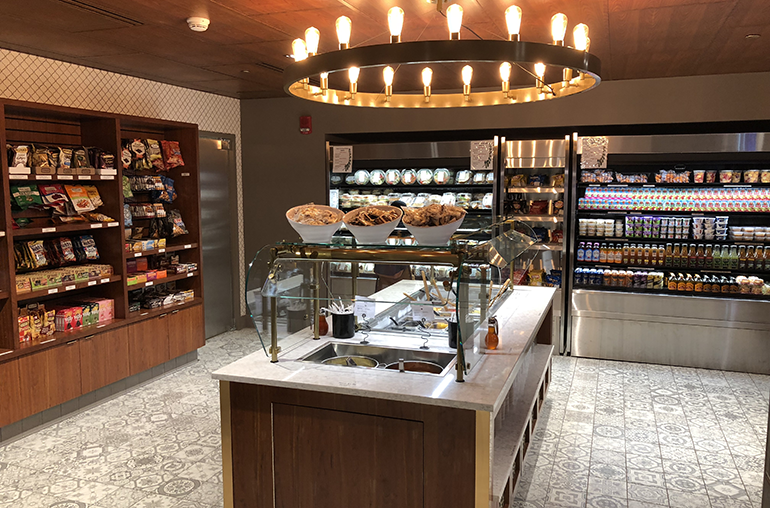 The new Grab ‘n Go c-store, also in the Community Center, offers an extensive line of grab-and-go sandwiches, salads and soups as well a large make-your-own yogurt parfait bar and a variety of packaged products from nearby businesses.

The new dining hall boasts nine food stations offering everything from pizza, grilled items and breakfast all day to vegan, kosher and halal selections, the latter two with their own dedicated serving stations. That’s especially important considering international students representing 69 countries make up 27 percent of the student population. In addition, the entrée station (Classics) dedicates half its offerings daily to gluten-free selections.

The venue is open from 7 a.m. to midnight seven days a week with unlimited access to board plan holders, which includes all full-time residential students, who are required to purchase the unlimited plan. The venue dispenses about 5,500 meals a day on average, which is about a thousand more than the six dining halls were doing collectively in previous years, says Richard Perna, director of dining services.

He attributes that jump at least in part to the availability of late-night dining.

“From 9 o’clock to midnight, we’re serving about 500 meals,” he notes. “Student participation is higher and we’re also getting about 150 more cash customers a day than before,” he adds, noting that faculty and staff drawn to the new venue make up a significant proportion of the new cash customers. 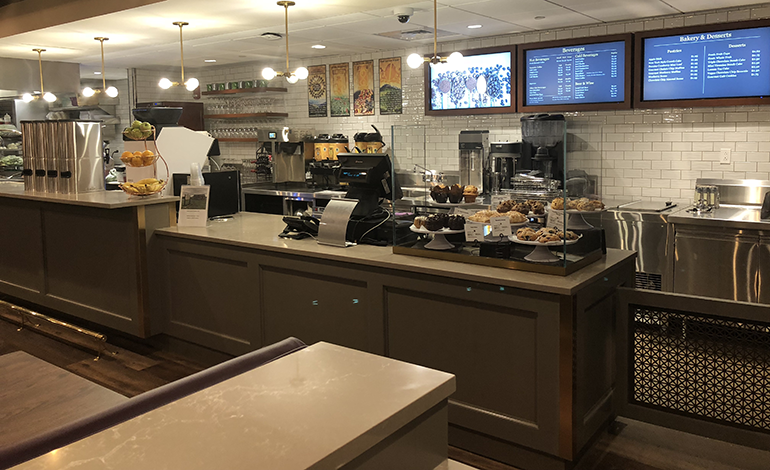 Cochary Pub & Kitchen is not just a pub selling beer and wine—many locally produced—but also a coffee shop/bakery that operates from 8 in the morning to midnight (5:30 p.m. on weekends) daily, drawing all-hours crowds.

“It’s been overwhelmingly positive,” Perna says about the overall reaction to the new dining environment. “To be honest, I think a lot of people were apprehensive about doing this [i.e., consolidating campus dining into a single venue] and there were a lot of concerns going into it, a lot of anxiety. But from day one when we opened the doors, people have been blown away by the amount of food under one roof. Having these nine different stations has really given us the ability to just do so much. Being able to offer the food from seven to midnight also has just been a massive win for this campus.”

In previous years, dining had operated more on a block schedule, Perna explains, with the few retail outlets providing some extended hours meal service, “but the selection was far less than what we have now.” 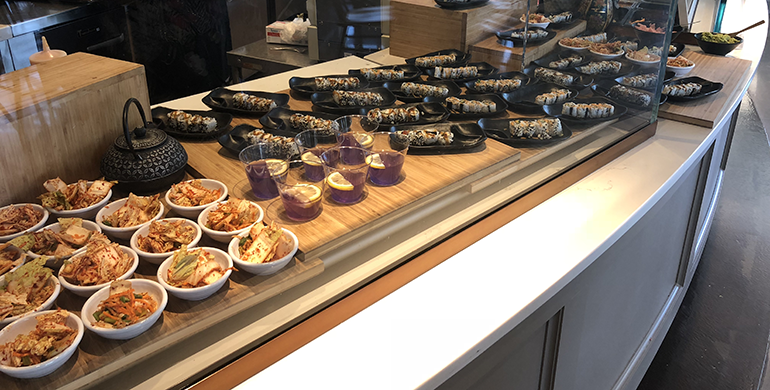 The sushi station displays its offerings.

The Community Center complex now also houses the Cochary Pub & Kitchen and the Grab ‘n Go c-store, which offers an extensive line of certified organic products; housemade sandwiches, salads and soups; and a variety of gluten-free, vegan and vegetarian options, as well as a large make-your-own yogurt parfait bar. Open weekdays between 10:30 a.m. and 5 p.m., the store also retails a variety of packaged products from nearby businesses, such as yogurt, honey, ice cream and other dairy products, applesauce, maple syrup and various fresh vegetables.

The store replaced a c-store that had been located elsewhere on campus and which did 280 to 300 transactions a day, while the new location does about 500.

Why? “Because it’s new, it’s bigger and has a greater variety of offerings,” Perna quips.

Meanwhile, the pub offers not only beers and wines—most from in-state producers—but also certified organic and fair-trade teas and coffees, milkshakes and smoothies. The food menu—almost all of it locally sourced—ranges from pub-style choices like fried chicken, burgers and fries to salads and vegan fare like a Mediterranean platter and a fried honey Sriracha cauliflower dish. It’s all made in-house using as many locally and responsibly sourced ingredients as possible.

“It is not just a pub with a kitchen inside it, but it also has a kind of coffee shop component,” Perna emphasizes, noting that it serves campus-baked breakfast pastries and dessert selections, including Mount Holyoke’s signature Chef Jeff cookies. Hours are a very un-pub-like 8 a.m. to midnight daily (5:30 p.m. on weekends), reflecting the all-day draw of the coffee/pastry shop component. 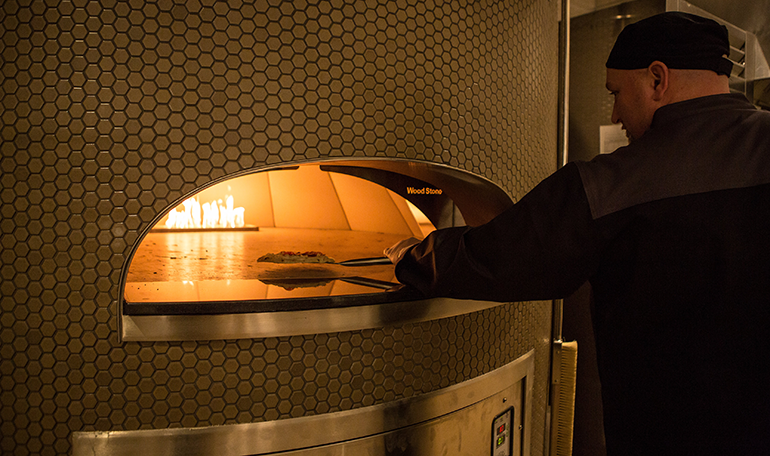 As this is a college dining center, there is of course a pizza station, with pies made in a Wood Stone oven.

The new venues with their emphasis on local sourcing have allowed the dining department to double its local spending from 7 percent to 14 percent, “and we opened up a food commissary with all of this change to be able to get us to 20 percent by 2020,” Perna adds.

Meanwhile, the former dining hall spaces around campus have been put to other uses, with one being turned into a “makerspace,” where members of the college community can use collective resources to turn their abstract ideas into actual products.