From late March through April, Thursdays and Fridays at lunchtime have been designated opportunities for the MSU campus community to travel back in time aboard the On-The-Go food truck.

What were people eating on the Michigan State campus more than a century ago? MSU Corporate Executive Chef Kurt Kwiatkowski, CEC, when first seeing the old recipes the archaeology group had found in archives featuring menus and recipes from banquets, luncheons and galas past, decided to change the recipes as little as possible, while still adapting them to the food truck.

“I first thought about ingredients and then thought about how we would be able to incorporate them into the food truck and easily replicate with quality being a big driver,” Kwiatkowski says. “I didn’t want to make any changes, as I felt the recipes we picked would stand for themselves.” Fried cod croquettes, made with poached cod and mashed potato breading and deep fried to order, are especially well-suited for a food truck menu.

An epigram, traditionally a breaded and fried cutlet of lamb, is made here using pressed beef, another popular dish that was found at 19th-century MSU banquets.

This sandwich (a ton of meat pressed into a hollowed-out loaf of bread) was popular during the early 1900s. “The idea behind the shooter sandwich is just so much fun that anything kinda goes,” Kwiatkowski says. “If you put together ingredients that make sense and will be received well.” In this case, local bread is hollowed out and layered with slices of roast turkey, horseradish cheddar cheese, mushroom duxelle and Dijon mustard-mayo. The sandwich is compressed overnight and grilled to order.

The shooter’s sandwich has been the most popular time-traveling item so far, along with the potato croquettes, but “I think the epigram sandwich might become the new favorite,” Kwiatkowski says. 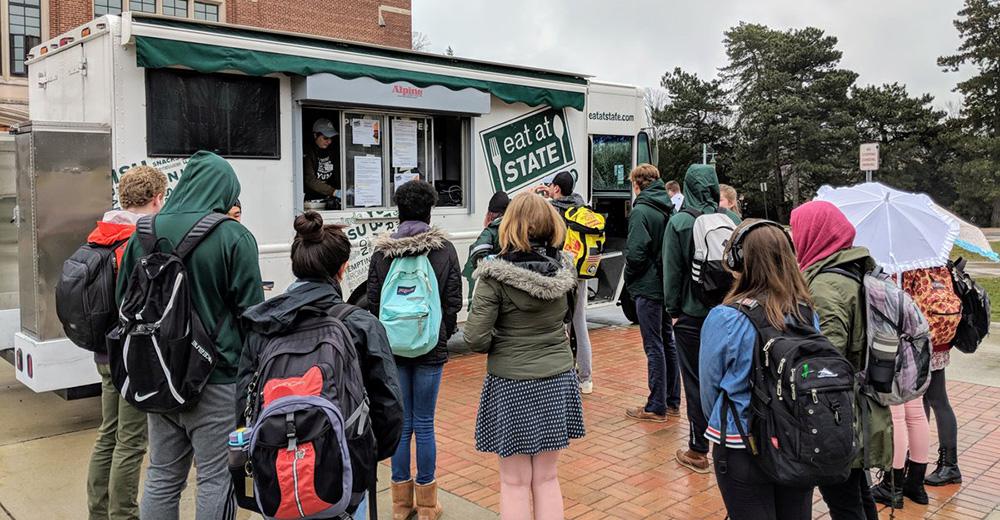