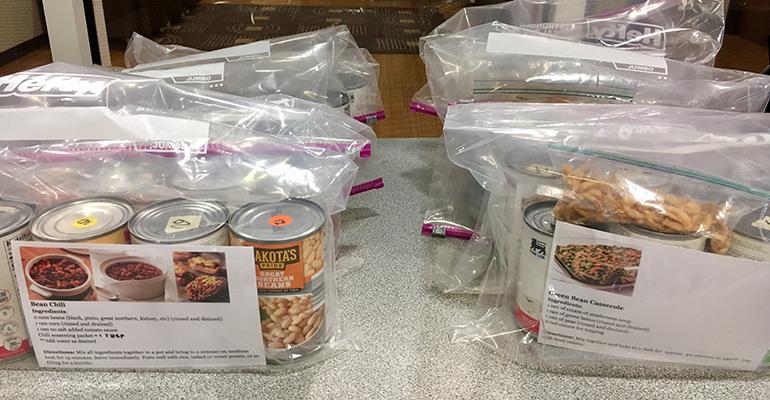 Lisa Eberhart, director of nutrition and wellness at NC State, is aware of the unique challenges facing those who are food insecurity, including little or no access to cooking equipment and a lack of kitchen skills, which is why the she introduced the recipe kits.

After receiving a large donation of fresh sweet potatoes to the food pantry, Eberhart heard from students that they didn’t know what to do with them. She and her “dining diplomats,” nutrition students, then went about giving students ways to utilize the sweet potatoes. Beyond simply instructing them on how to cook the fresh vegetable, Eberhart and staff wrote recipes on cards ranging from baking the potato to cutting it up and stir-frying, eventually graduating to providing packets of seasonings to go along with the food. This was their first foray into their future kits.

Eberhart then returned home to a waiting Blue Apron meal kit and realized that recipe kits could work for the patrons of the campus food pantry. 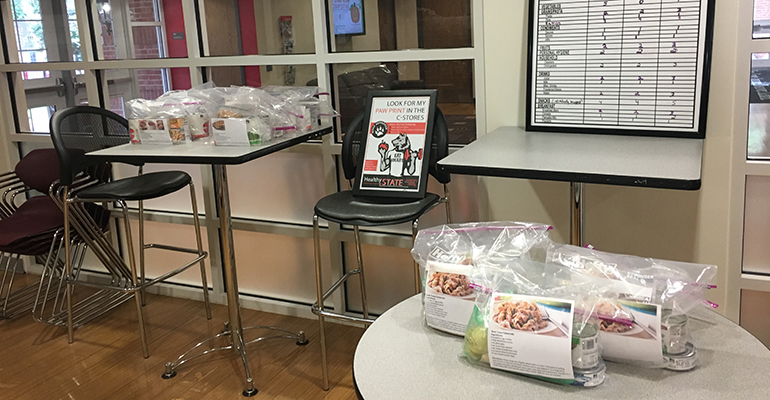 The recipe kits are made of over-donated items to the pantry, mostly built around corn, black beans and green beans. The kits are designed to feed between two and four people so there is flexibility for both families and single-person households, Eberhart says. The recipe kits are free to students and contain all ingredients needed to create the meals.

The nutrition students create the recipes, take a photograph of the finished product, write out the instructions and package the kit, a project Eberhart says the students enjoy as they get the chance to be creative with food.

Last semester, dining was making about 30 meals a month, and Eberhart expects that pace to be maintained next semester.

Since everything in the pantry has to be shelf stable, both for the student volunteers who don’t have the knowledge of how to keep large amounts of fresh foods safe and for those who take food from the pantry and don’t have access to a refrigerator, most recipes are vegetarian. Past recipes include green bean casserole, tuna noodle casserole and tacos. 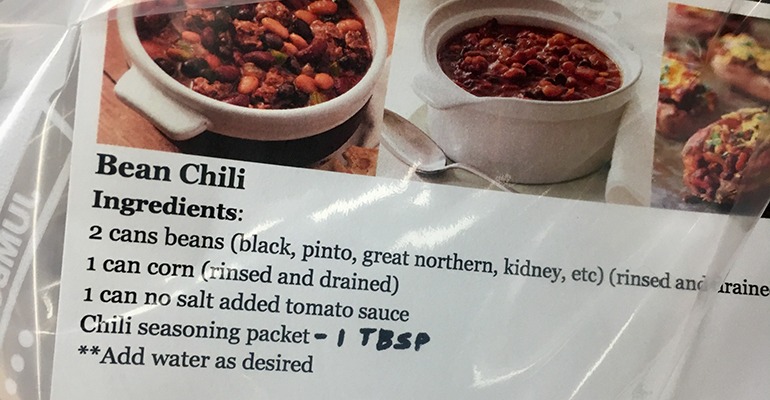 For the most part, Eberhart and her team work to ensure that the meals are home-style. Though the director of nutrition and wellness, Eberhart says “being able to cook some comfort food, especially when you’re food insecure, is nice. Something that your mom might have made, I lean towards those types of food.”

A recent example of this was the inclusion of an individual bag of potato chips to top the tuna noodle casserole kit.

Eberhart already has some ideas for future recipe kits that address the lack of equipment that many on campus face, including a kit that can be made entirely in a microwave, mug included.

Outside of pantry donations, the kits contain $2 of purchased ingredients from the local grocery store, which works out to fifty cents a portion. Some items, like taco shells and spices, are obtained from the kitchens at NC State and don’t factor into the additional price of the kits.

The recipe kits are currently only available in the pantry and there are no plans to expand at this time; however, Eberhart is considering adding coupons to the kits to add fresh ingredients to the recipes at a discounted price. She does say that she hopes to expand the culinary education of those who are food insecure with potential on-campus cooking demonstrations.

“If you teach people how to cook, that’s a really impactful way to help people with food insecurity. This doesn’t only give them some food but gives them some skills and once they put this together, they can put it together again later with food in the food pantry.”

According to Eberhart, the need for the food pantry has increased since hurricanes Florence and Michael affected the local community. Many students at NC State are from the Eastern Carolinas and were hit hard during the storms, resulting in their family homes being damaged or destroyed and leading to financial hardships for those students.

Additionally, NC State has introduced a program in conjunction with dining that allows students on meal plans to gift their guest meals (between two and five per semester depending on the specific meal plan) to those in need. This November, an introductory “Giving Day” will allow students to add to the pool of meals that dining has already started of 1,000 meals. These meals are added onto student’s cards discreetly at their need as determined by the Department of Student Affairs.