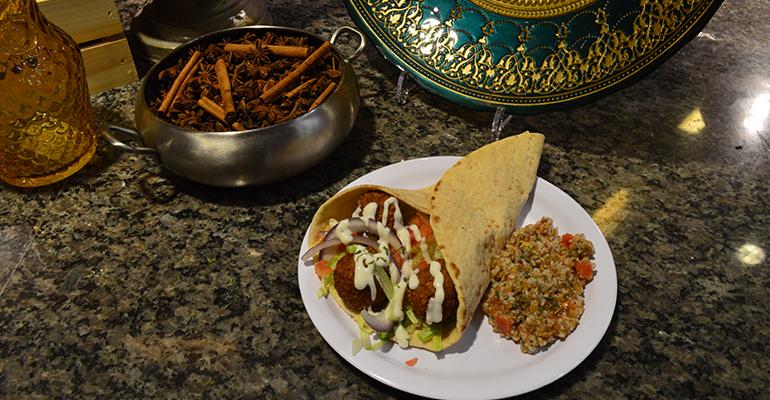 <p>FRESH FALAFEL: Ground chickpeas are transformed into something completely unique and delicious when falafel is made. This dish and other Middle Eastern favorites are building a fan base at the Saffron Grill, Temple&rsquo;s new halal concept.</p>
News & Trends>Colleges & Universities

When the dining team at Temple University noticed students lining up at area halal food trucks, it became obvious there was an unmet need…and a big opportunity.

“It’s something that we were missing out on, looking at our overall offerings,” says Richard Green, general manager with Sodexo at Temple. “We had done some surveys and talked to students, and we were definitely underserving the Muslim population who want to eat halal food.”

While scouting out the perfect location (which turned out to be in the centrally located student center food court), dining services met with the Muslim Student Association for some discussion.

“While a lot of Muslim students were getting halal food from food trucks, their confidence had been shaken, because some food trucks said they were halal but weren’t really,” Green says.

The criteria for halal food refer to which foods are allowed and how the food is prepared, but the focus is mainly on meat and how it’s butchered. There’s already a kosher kitchen on campus, which is similar to halal, but there’s more detail in the preparation side and the utensils used for cooking.

Looking to be trustworthy and authentic, “we found a purveyor who is certified halal,” Green says. “We want to communicate that we take this seriously.”

At the beginning of the school year, Saffron Grill was ready to open. The type of food helped make it popular with a diverse group of customers, Green says. “More people are interested because the food is so fresh and it’s a concept unlike any other that we have.”

Falafel is an item that’s made in house and has been especially popular, according to Sarah Mays, director of operations with Sodexo at the student center.

“We use canned chickpeas, flour and red onions and we place them in a food processor for a consistency that’s fine and pasty but not quite smooth, like hummus,” Mays says. “And then we fold the patties together by hand. If you overwork it, you won’t have enough texture.”

Looking ahead to next semester, Mays and Green plan to put on an event with the Muslim student group and also to expand menu offerings to continue to drive sales. On the agenda: more ancient grains, vegetarian items and just an overall wider variety of Middle Eastern cuisine.

“It’s really been picking up lately,” she says. “With foods like the falafel and cucumber salad and babagnouj, the concept just appeals to so many people.”