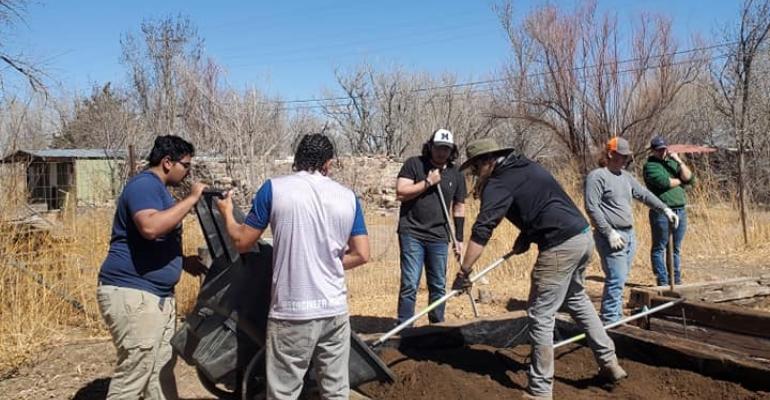 What started as an idea to bring some fresh herbs to dining hall menus New Mexico Tech quickly blossomed into something bigger: a circular food production and food waste diversion program.

Appropriately, getting from Point A to Point B wasn’t a straight shot. Daniel Leatherman, the school’s dining services director, says the department was looking for a way to create a program that would create a buzz to encourage student involvement, but one that would also endure—something that would be sustainable, naturally. Another goal was to loop in the community.

When discussions about a garden began about a year ago, Nowka Gutierrez, auxiliary services director on campus, heard about a group of students keen on starting a community garden and club. Eventually, Chartwells and New Mexico Tech, with the support of the local community and Socorro County Options, Preventions and Education (SCOPE) coordinator Samantha Winters, put together a proposal and sought grant funding for the initiative.

Chartwells pledged $5,000 annually toward the garden; SCOPE kicked in $1,500 and the city and Rotary Club donated $2,500. The city has donated irrigation lines and timers, a hydrant and tools, and is not charging for water service. 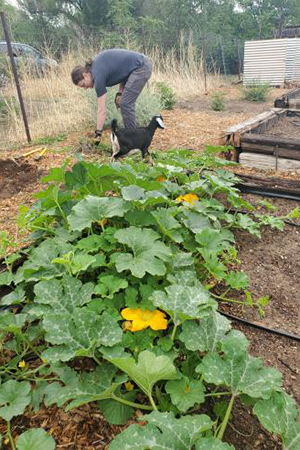 The partners looked for an appropriate site for the garden, eventually settling on a weedy lot. “The space belonged to the university, but it wasn’t used for anything in particular,” Gutierrez says. “Then we had to figure out how to repurpose it for a garden.”

Ground broke in January of this year. Chartwells and the school officially launched the New Mexico Tech Gardening Club, whose 30-plus new members have provided the bulk of the labor to establish and maintain the plot. They’ve gotten help from Leatherman, Gutierrez, several faculty members and a few area residents. Other campus clubs helped prepare the space, work, removing brush and hauling railroad ties and mulch, and local growers contributed some of the plants. The facilities department provided mulch from felled trees on campus.

The 12,000 sq ft plot—about twice the size of a basketball court—incorporates eight raised beds and produces squash, sweet and hot peppers, tomatoes, lettuce and herbs. Another bed yields annual flowers. Peach, apple, fig and walnut trees and grape vines were also added, although these are all too immature to yield product.

Once the garden issue was settled, Leatherman looked at expanding an already ongoing program that diverted New Mexico Tech’s food waste to local pig farmers. He saw the garden provided “a great opportunity to divert some of the waste for composting purposes.”

In the first three months of 2022, the program diverted 1.3 tons of food waste to feed farm animals, provided 72 lb. of food for composting and sent nothing to landfills. Chartwells can quantify its waste impact through Waste Not 2.0, proprietary software. The software also tracks water usage and CO2 footprint and eventually will help maximize garden yields.

While legal issues prevent dining services from incorporating the garden’s bounty on menus, the produce is available to students and other volunteers who work in the garden, Leatherman says.

“It creates a really great culture of appreciation and thoughtfulness,” he says. “I think that was one of the main purposes of the garden—to create a community culture that also puts sustainability at the forefront.” Besides cementing a relationship with the local community, the garden serves to educate students about role of agriculture in producing food, he adds.

Now that the garden is established, Gutierrez is hoping to establish a consistent work schedule. During Spring semester the schedule was a bit erratic; over the summer, students enrolled in the campus Upward Bound helped keep the garden going by planting micro-greens and handling routine weeding and watering chores.

The garden also solves the problem of Central New Mexico’s status as a food desert. “It fills the void for students being able to get their hands on fresh vegetables and herbs to use for their own cooking,” Gutierrez says.