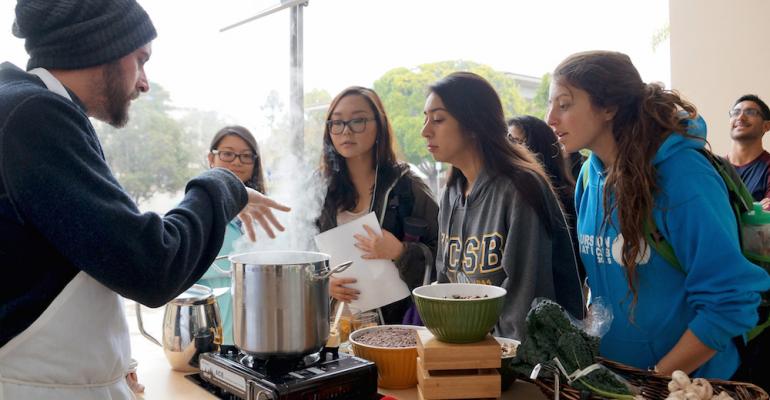 Subsiding on coffee and ramen noodles does not have to be a right of passage for college students, says Mike Miller, of the University of California Santa Barbara (UCSB). Students can budget, purchase and prepare thoughtful, healthful meals on financial and time constraints, but they need some help. The entire UCSB campus is giving them the help they need through the new Food, Nutrition and Basic Skills Program.

The program was inspired by the University of California Global Food Initiative, which “addresses one of the critical issues of our time: how to sustainably and nutritiously feed a world population expected to reach eight billion by 2025,” according to the university’s website for the office of the president.

Specifically, the Global Food Initiative granted each UC university campus $75,000 with the goal of combating food insecurity on campus.

“My initial thought was that we would dump the money into our campus food pantry,” says Miller, the director of UCSB’s Office of Financial Aid and Scholarship. The university’s Associated Students Food Bank has serviced more than 5,400 students since opening in spring 2011. Current enrollment at UCSB is 23,051.

“But when I started talking to the experts on campus, that was the furthest thing from their mind,” Miller says. “We’re always going to need to have the food pantry, but what we really wanted to do was come up with a holistic solution that would educate our students and allow them to make healthy food choices and just live healthier lifestyles through education and learning about food. It’s been a lot of fun to watch the evolution of the whole program.”

The program has four tracks. The financial component helps students with budgeting, debt and managing income. The purchasing component puts those budgets loose in the real world. Students learn how to buy on a budget and in bulk through a partnership with a local food co-op. When they’re making decisions at the grocery store or markets, they’re encouraged to make mindful decisions, to read labels like organic and understand what they could mean for their lives and others. That track falls under mindfulness.

Once students have budgeted and bought the food, they need to cook it, which is often where they have problems. That’s where John Lazarus, the assistant director of UCSB’s University Center (UCen) Dining, comes in to help with the fourth track, even if it’s not exactly in his job description.

Although the school requires students who live on campus to have a meal plan for the residential dining halls, most students move off campus after their freshman year, Miller says.

To help those students, particularly those on limited budgets, Lazarus’ team plans the subject matter and curriculum for the approximately once weekly culinary classes. Lazarus makes sure that there is a good mix of vegetarian and nonvegetarian options, and helps gets the recipes to students through handouts or online. Since the initiative launched in January, staff from the dining program have led demonstrations on cooking with CSA ingredients; preparing local and affordable meals; and a class on cooking with five ingredients or less.

Mickael Blancho, who’s a bit of celebrity on campus and is known as the UCSB Soup Guy, has also led a class, Lazarus adds. When Blancho is not demonstrating his soup skills, he makes soups for many of the retail food locations throughout the campus, which include cafes, coffee shops, convenience stores and a commissary kitchen.

Blancho, Lazarus and other dining staff teach cooking classes on a mobile demonstration kitchen that was purchased with funds from the University of California Global Food Initiative. The sustainability committee on campus, which Lazarus is a member, has been discussing creating a multistation permanent demonstration kitchen for a while, he says. Currently, they’re treating the smaller and more affordable demo kitchen “as an incubator,” he says. “Let's find out if campus really wants to learn about this stuff and if so, I think we have a better case to make to the campus at large that this is a need.”

So far they’ve found that students are hungry for cooking lessons, and Lazarus encourages other universities’ dining staff to give an initiative like Food, Nutrition and Basic Skills Program a try, even if it falls outside of the usual preview of campus dining. “It’s not an insurmountable investment,” Lazarus says of the approximately $7,000 spent on the demo kitchen, hardware, pots and pans, seed money and funds for pantry stocking.