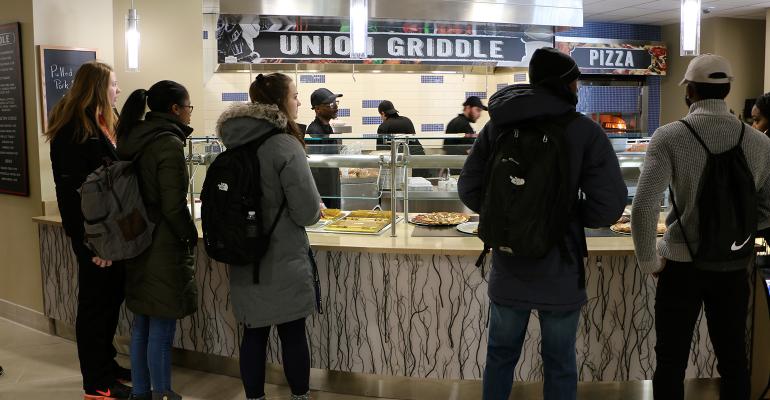 How do you build community on a college campus? Well, first you need a venue. That’s what was always lacking at the University of Illinois at Springfield (UIS), where an enrollment of some 5,000 students has traditionally tended to scatter when not taking classes if for no other reason than there was really no place on campus to gather.

Well, there is now.

On January 14, just ahead of the start of spring semester, the ribbon was cut to officially open UIS’s new Student Union building, a 52,000-plus square foot hub of campus social activity complete with offices and workspaces for various student and volunteer organizations, a ballroom for special events, a gaming/activity center, several dining outlets plus the first branded Starbucks unit on campus. The university’s first Starbucks unit is a major draw in the new Student Union.

The dining outlets, along with the main catering operation, were relocated to Student Union from the Public Affairs Center, which is now closed but may eventually house a relocated bookstore. The Student Union building, meanwhile, is a completely new structure.

The dining concepts were revamped to a degree for the move. For example, the World Flavors international station now allows diners to choose their vegetables, proteins, grains and flavoring sauces, then have them prepared to order by a chef. The station rotates different ethnic cuisines daily to offer variety.

Meanwhile, the deli station now lets customers assemble their own sandwiches, which are priced by weight, and includes a toaster oven for those who wish hot dishes. “The station is about twice the size it used to be” to accommodate the expanded ingredient options, says Geoffrey Evens, director of university dining services at UIS.

The pizza station has basically the same choices as before but the recipes for the sauces and crust have been upgraded, and baking is now done in a higher quality oven for a better all-around product, Evans notes.

Pricing at all the stations is a la carte and can be paid with UIS’s declining balance-based meal plan program. The school has no all-you-care-to-eat dining facilities, though about a thousand student live on campus. Meal plans are required only of freshmen and sophomores living on campus.

That won’t change, at least not immediately, but Evans is hopeful that the new student union will start to bring community to the scattered student body.

“The students really didn’t have a central gathering space [before], so this is now their building [where] they can come to study, eat [and hang out],” he says, noting the different bookable spaces for programming and organized activities in addition to the more informal lounging and gaming areas.

The facility’s new grand ballroom seats over 400 and is served by a full catering kitchen.

The new UIS Student Union is designed to serve as a campus social hub with plenty of spaces to hang out and interact.

So what’s been the reaction so far from the returning students?

“Very positive,” Evans reports. “They like the increased options and the Starbucks has been a big hit.” Previously, the campus coffee shop was an in-house operation.

“They did well but it’s not a Starbucks,” he laughs.

Overall participation for the dining outlets have jumped about 20 percent in the first few days.

“We’re pulling in people who aren’t required to buy meal plans [but] live on campus, who are coming in to eat,” Evans says, adding that the Starbucks has also drawn traffic from nearby residents.

The dining venues are open from 7 a.m.to 10 p.m., though the last two hours are limited to a sports grill area serving fare like chili, burgers and pizza to students who now prefer to hang out in the university’s new “living room,” studying, socializing or playing games.