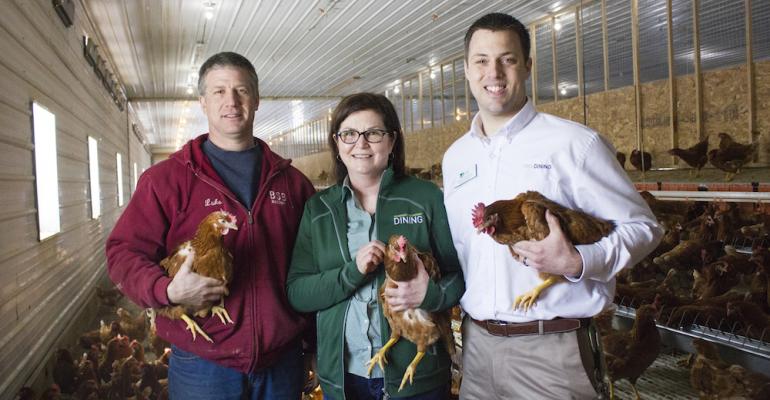 At one college, the eggs are practically chicken-to-kitchen fresh

Something egg-citing is going on at Northern Michigan University (NMU). This past February, the school’s dining services launched a supply deal with BSB Farms, an egg supplier located only about 15 minutes from campus, and that has meant eggs literally hours from the hen that laid them.

Currently, NMU uses about 500 dozen (around 6,000) individual eggs a week from BSB in its Marketplace and Wildcat Den residential dining operations as well as three campus retail outlets and the Simply Superior catering operation that serves both on- and off-campus clients.

The eggs are cage-free and come from BSB’s 4,000 Isa Brown chickens, which are free-range and pasture-raised on the family-owned farm, producing some 320 dozen eggs a day. The free-range approach, which allows the birds to go outside and forage in the grass and dirt, to dust bathe and to move around in the sun and open air, produces eggs that some studies have shown are lower in cholesterol and saturated fat and higher in omega-3 fatty acids and protein than commercially produced eggs.

“The yolks are brighter, the texture is different and the flavor is more pronounced,” he says. “There’s more of an eggy flavor and you can definitely taste the difference.”

Students seem to have noticed and approved as shell egg consumption on campus is up about 10 percent since the school started purchasing eggs from BSB, Mileski notes.

Some operational procedures have been altered because of the differences in the product from commercial eggs.

“Because they’re so fresh that they are sometimes coming to us from the chicken in a matter of hours—sometimes they don’t even hit a cooler, they just come directly from the farm to us on the same day—the shells tend to adhere to the white a little more when we hard boil them,” Mileski says. To compensate, the kitchen team has resorted to a speeded up procedure that involves steaming followed by chilling and then quickly peeling.

They also developed a process in which the eggs are cracked into nonstick muffin top pans to produce egg patties for sandwich items.

The locally sourced eggs are being heavily promoted with egg-centric specials at the retail locations. Meanwhile, the Farm Fresh station in the Wildcat Den recently displayed posters highlighting the BSB operation, its local family roots and its commitment to cage-free, free-range principles.

All the school’s shell eggs now come from BSB, and Mileski is looking into how to expand that into bulk bagged egg product. He hopes to be using 100 percent BSB for all campus egg needs by the end of next fall.

“If we’re going to commit to this farm, it should be 100 percent,” he says, noting that BSB could easily handle the added volume.

As for pricing, while the BSB eggs are certainly more expensive than standard commercial eggs, the price negotiated with BSB is lower than for commercially available cage-free eggs, which is what the department would have been moving toward sourcing anyway to meet student preferences, Mileski offers. “I think this is a win-win for us because BSB is not just cage-free but local, which students also want, plus it’s also a lower cost than what we would have been buying.”

NMU’s relationship with BSB dates back to around the middle of last year, when the school was looking for local suppliers it could forge relationships with. BSB was already supplying a local co-op with which NMU is involved, and that got the ball rolling. “We were looking to see which suppliers working with the co-op could also possibly supply us,” Mileski says.

One additional benefit for NMU is that the relationship also provided it with a reliable egg supplier at a time when the avian flu crisis was hampering other sources.

In the wake of its successful partnership with BSB, NMU is starting to cultivate other local suppliers, such as North Farm in Chatham, Mich., a Michigan State University extension program that maintains greenhouses and hoop houses, as well as local producers of beef cattle and hogs.

“We know these small operations can’t commit to meet our total usage needs,” Mileski says (the school serves up to 8,000 meals a day), “but we want to see what these partnership might look like and what they can bring to campus.”