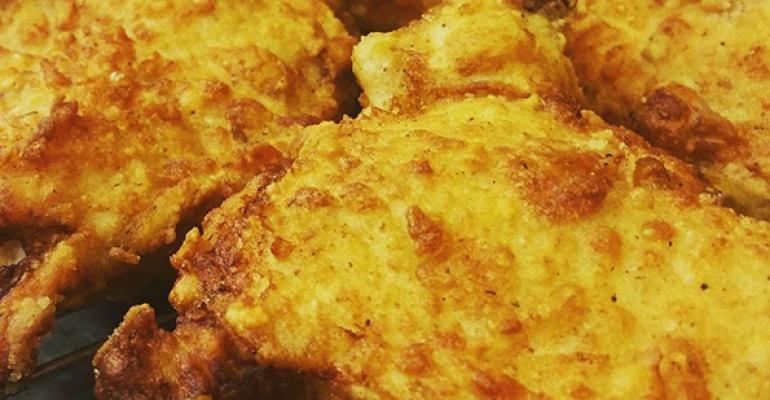 One on one with college dining’s BBQ warrior

A university chef describes how he went from washing dishes to prime-time grilling.

This crop of college students is often called the Food Network generation. For those students at Texas Lutheran University, in Seguin, they’ll find a celebrity behind the lines. Ernest Servantes, executive chef with Sodexo at the university, won Food Network’s “Chopped Grill Masters” back in 2012. He currently stars on Destination America’s “BBQ Pit Wars,” in which he raises the heat against hundreds of other skilled grillers. FM spoke with Servantes about his passion for competitions, how he got into college foodservice and the depth of his Texas barbecue pride.

FM: I know you can’t say much about “BBQ Pit Wars” as it just started airing. Can you give any hint of what’s to come on the show?

Servantes: It was the greatest thing I ever did in my life. I’m competing against pit masters from Georgia and I’m going into their backyards. I’m the only Texas boy out there and I’m going to give them a run for their money. I also went against the winningest man in barbecue, Myron Mixon. Let’s just say he’s sassy.

FM: How was the experience different than your time on “Chopped?”

Servantes: “Chopped” was fast and furious. “BBQ Pit Wars” is more low and slow, but you still have to make sure the quality of barbecue is there. On “Chopped,” we competed against three people and in “Pit Wars,” you’re competing with more than 100.

FM: A lot of “BBQ Pit Wars’” drama comes from how your style of barbecue would be received by the local Georgia crowd. How do you describe Texas-style barbecue?

Servantes: If you go to the South—Florida, Alabama, Georgia, Mississippi—it’s all about pork. And they like their stuff sweet and they use a lot of barbecue sauce. Here in Texas, we’re all about the purity of the meat. Take Texas brisket, which is basically seasoned with salt and pepper. We also use a lot of oak and hickory in our barbecue.

On the show, I tell them the only reason they think they like Georgia-style barbecue is because they haven’t had the good stuff until I got there.

Servantes: I learned the art of making the perfect pork from a whole hog to Boston butt to pork shoulder. It’s an art. I learned a lot and I brought it all back to Texas. It’s helping me win a lot more competitions.

FM: What do you cook that you’re most proud of?

Servantes: The students love it when I make barbecue. Anything with smoke, I’m pretty good at.

FM: What would you want your last meal to be?

Servantes: A plate of buttermilk fried chicken and barbecue spare ribs and an ice-cold glass of Kool-Aid.

FM: What is your favorite ingredient to cook with?

Servantes: Dry Mexican chilies as in chili powders, moles, etc. I use a lot from my Mexican roots.

FM: When did your love of grilling start?

Servantes: My dad is the biggest influence when it comes to BBQ and grilling, really anything to do with primordial flames—that’s my pops. Growing up, we did a lot of sweetbreads like barbacoa, that’s cow’s head smoked overnight. In the morning, we peel it off and eat the tongue. My family also did a lot of grilled intestines in the Mexican style.

FM: I hear you’re a hoarder of grills. How many do you own?

Servantes: Yes, I am but my wife asked me to get rid of some of them this past summer. At one time I had over 18 grills not counting my trailer pits.

FM: Did you always want to be a chef?

Servantes: My grandma had a restaurant growing up and I really enjoyed being there. I realized I had done a lot of jobs in my life, but the one thing I was really good at was cooking. But I didn’t go through a culinary program; I worked my way up from dishwasher. At one point, I was a corporate trainer for Outback Steakhouses. Then I moved to fine dining where a chef took me under his wing and I moved up to saucier, sous chef, executive sous chef and finally to executive chef.

FM: How did you get into college foodservice?

Servantes: If you had told me 15 years ago, at the height of culinary dominance at high-end restaurants, that I’d be feeding hundreds of students, I’d say you’d be crazy. But here’s what happened: I’m a family man, I love my kids and I wanted to be around for them and being in university foodservice was the best way to go.

Ten years later I’m still here and I love it. I bring my high-end standards of food into the dining services. I don’t consider what we have as a cafeteria. It’s more of a food court atmosphere where we serve intensely fresh food, as much local ingredients as we can, as well as seasonal fare. This is not your expected institutional cafeteria with trays, etc.

FM: What’s on your cutting board these days?

Servantes: Right now corn is a big late summer item so we’ve been serving Mexican-style street corn. Cantaloupes and watermelons are really popular—they’re from about 30 miles from here. Our mushrooms are sourced within 30 miles of the university too.

FM: We’ll be rooting for you on “BBQ Pit Wars.” What’s the big prize?

Servantes: It’s $500,000 but it’s really about winning respect. People are always asking me what the difference is between Georgia barbecue and Texas barbecue? I say, “One word: flavor.”