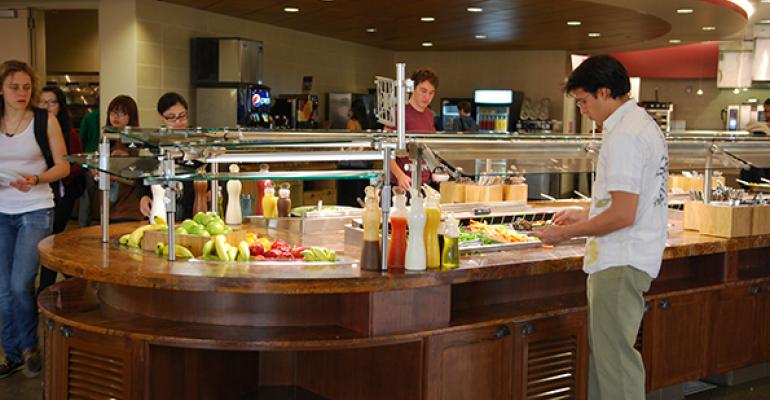 Consultant John Cornyn writes a rebuttal to a recent New York Times article intimating that meal plan increases were being used for items other than food.

Last week, the New York Times wrote a story intimating that meal plan cost increases were not being used to pay for food, but rather for a variety of reasons, including “to shore up their balance sheets, create academic programs and scholarships, fund special ‘training tables’ to feed athletes, and pay for meals for prospective students touring campus.”

Whenever a topic makes it to the national press, the debate and, sometimes emotional intensity, amplifies. I believe that an attempt to fill in some content and contextual gaps will shine a fresh perspective on what is coming across as an indictment of college and university foodservice specifically and enhancing campus life in general.

Here are some discussion points I’d like to put forth regarding the New York Times article discussing the just announced University of Tennessee and Aramark contract.

The $300 fee that students are asked to pay actually translates into $300 of dollar-for-dollar value. Of all the fees that campuses impose on students—for a wide variety of reasons—this is one that actually has the potential to return 100 percent of its value in food and drink purchases. If, at the end of the semester, they do not use those funds, the money can be returned. This is the one meal plan that generally results in less than 2 percent being unspent by the end of the academic year. In the interest of not diminishing the academic budget, new or increased student fees, for a variety of reasons, have become a reality.

The rationale behind the implementation of a relatively modest fee to all students is actually a far more equitable approach than just taxing the students with traditional meal plans. The intent is based on a simple economic principal: the greater the revenues, the more money that can be generated to support infrastructure improvements. In the retail restaurant world, it would be naïve to think that the prices paid do not include an allowance for infrastructure and atmosphere/décor enhancements.

If not challenged, there is a very real perception that all colleges and universities are raking in millions of dollars from their contract management companies. The vast majority of colleges in the United States are nowhere near the size of the University of Tennessee. According to the U.S. Department of Education, the large mega-size public institutions represent less than 5 percent of all colleges and universities.

With the vast majority of colleges and universities in the United States having 10,000 or fewer undergraduate students (88 percent), they cannot even begin to dream about, much less, enjoy those kinds of investments. Almost certainly, they do not have high-profile athletic programs that allow them to consider, much less offer, free or substantially below market prices for sports teams, to say nothing of how the NCAA might view such arrangements.

I am sure there are institutions that redirect money paid by a dining services management company for other purposes. Balancing budgets on both public and private college and university campuses these days has become a specialized art form. In 30-plus years of college and university foodservice consulting, I have found that the vast majority of administrators are solely focused on creating and sustaining an environment that supports, if not, enhances the academic mission. Can anyone seriously question the value of having a vibrant on-campus dining program dedicated to that end?

There is no question that there have been questionable, if not fraudulent, uses of student-generated dining revenues. I have encountered a few of those situations in my career and, fortunately, the perpetrators have either been fired or are spending time doing penance in prison. Unless there is data to suggest otherwise, the vast majority of self- and contractor-operated foodservice programs perform in an honest and ethical manner.

The University of Alabama, Auburn University and the University of Alabama Birmingham, along with their respective contractors (each different), did have to defend a lawsuit that was filed in protest of a mandatory dining fee, as mentioned in the Times article. The lawsuit was instigated by several alumni joined by a few students. The Alabama Supreme Court ruled not once, but twice that a local restaurant operator’s supposition that a university has no right to expand its foodservice offerings because it might hurt his business did not have legal standing. I happen to support the counter supposition that colleges have an obligation to create and sustain campus community socialization on their campuses.

While most colleges and universities want to create and sustain a positive town-gown working relationship, there is a need for many campus administrators to insist on offering on-campus foodservice for the simple reason it helps to establish and sustain a safe environment for the students. Generally, there are no restrictions on students leaving campus at any time they wish; the imperative is that there is a choice.

During the past two sometimes economically tumultuous decades, universities were not immune to the need to defer much-needed maintenance and upkeep of their dining facilities. Dining facilities constructed in the 1960s and ’70s are, literally, falling apart. A reasonably and responsibly based investment from a contract management company or, in the instance of self-operated programs, bond issuance or loan, is the only realistic way to completely remodel or construct new facilities that will meet the culinary demands of today’s students. There is no secret that this is not free money and that it must be paid back.

More on the discussion

The vast majority of dining programs that I am familiar with are mandated to be financially self-sustaining. This includes the ability to pay back all or a major portion of the capital investment over a 10- to 20-year period. So, yes, the students are asked to pay a proportionate share to make that happen. That does not imply that future students are not off the hook for the simple reason that, after 10 to 20 years (if not sooner), there will be a need to reinvest in the facility so as to avoid the dreaded deferred maintenance conundrum. This situation is no different for restaurants in the public sector.

As most public college and university administrators painfully know, the amount of money in support of academic programs continues on a downward spiral. I am aware of one state where the legislature mandated no tuition increases for several years. The only way for administrators to balance the books? Increase student fees and, of course, meal plan and retail prices and resultant commissions as a means to make up for the lost revenues in support of the academic program.

There has been a suggestion that contractor investments ultimately prevent schools from dismissing those who fail to meet mutually agreed upon performance expectations. That is simply not true. Unamortized portions of remaining investments are generally picked up by the succeeding contract management company. The real secret here is to not allow capital investments to become a financial drag on the annual financial statement at the expense of taking food off the plate or reducing service levels.

Finally, there must be an acknowledgement that there are several social and environmental factors that ultimately drive up the cost of food. While it is easy to find situations where the on-campus prices are higher than those found in the local area, people don’t ask why. Are greedy vice presidents of finance or the on-campus foodservice operator the guilty culprits? No.

There have been one or more campus community-based decisions to be environment-, social justice- and animal humane-conscious resulting in adding 15 to 25 percent more to the food cost. A recent initiative occurring on several campuses is to insist that foodservice workers be paid a living wage and receive increased, less expensive, benefits and other perks. While the students bemoaning the cost of meal plans and retail prices on campus are sincere, they fail to recognize that many of these cost-increasing initiatives were fostered by their fellow students, not the administration. There is a valuable educational component here: initiating positive environmental and social changes generally result in increased costs.

Like most contemporary social and economic issues, the “devil is in the details.” Before making any major systemic meal plan changes, it would be prudent to step back and consider a more holistic perspective that factors in the often overlooked intrinsic value of having vibrant foodservice concept choices for as many hours of the day as possible.

John Cornyn is vice president of Brailsford & Dunlavey (B&D).
John joined B&D in 2013 after 37 years as the founder and partner of the Cornyn Fasano Group, Inc. based out of Portland. He has provided foodservice management advisory services for clients in a variety of industry segments including K-12, higher education, business and industry, corrections, cultural, and recreation. His 400-plus projects have included operational assessments, strategic planning, requests for proposals/contractor selection, pouring rights negotiations and pre-design programming. At B&D he continues to provide foodservice advisory services to clients as well as oversees the broader expansion of the firm’s foodservice practice.