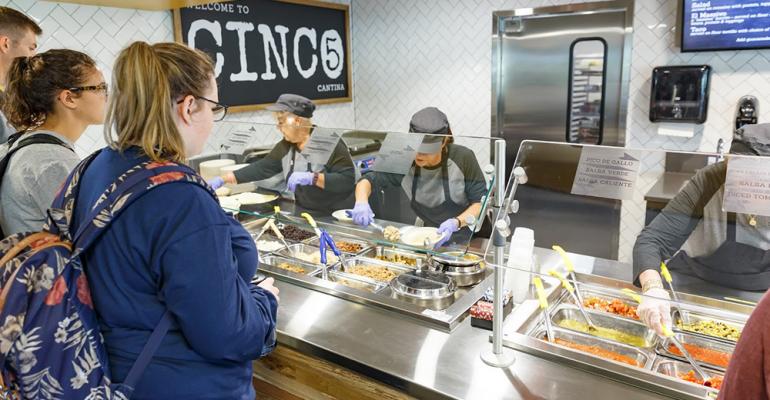 Parkhurst’s Mexican concept packs them in at Duquesne

That basic approach was adapted by Parkhurst Dining into a proprietary Mexican themed concept called Cinco Cantina, which was rolled out last fall at the Parkhurst-managed dining program at Duquesne University in Pittsburgh. It has been a big hit there, being second busiest only behind the campus’ Chick-fil-A unit among Duquesne’s 10 retail dining locations, says Parkhurst’s resident district manager at Duquesne, Dave Manz. Diners can customize their order with more than 15 ingredient options, including a choice of five proteins, two of them vegan.

“We opened it in late August when the fall semester started and it’s been a monster, so popular, really a strong concept and we couldn’t be happier,” he says, noting that the business is running 10 to 15 percent above initial projections.

“For an in-house brand, I think our chefs really outdid themselves in terms of authenticity and image” in crafting the brand, Manz adds. The concept logo and brand image were created by Duquesne Dining/Parkhurst Marketing Manager Kathryn Lavelle.

The contemporary fast causal Mexican concept is built around five core entrees enhanced with fresh and locally sourced ingredients when in season and exclusively scratch made salsas, guacamole, dressings and queso.

Cinco Cantina’s five core menu offerings (one reason for the concept name) are designed to satisfy multiple constituencies, from big eaters to doctrinaire vegans. They include mission-style burritos, bowls, tacos, salads and the signature El Masivo, a hearty one-pound burrito.

Guests can customize their favorite entrée with more than 15 fresh ingredients, including five seasonal salsas, plus two types of rice, beans and five protein options that include vegan options mole tofu and Trigo Latina, a mixture of bulgur wheat and lentils tossed in Latin-inspired seasoning, while meat-based protein options include a signature five-spice chicken.

In addition to the food choices, Cinco Cantina has partnered with craft beverage vendor Stubborn Soda to provide a refreshing complement to the individualized meal creations. Stubborn Soda offers a line of crafted, boldly flavored sodas made with unusual flavor combinations such as orange hibiscus, black cherry with tarragon and lemon berry acai, and without unnecessary ingredients such as artificial sweeteners and high fructose corn syrup. Instead, sweeteners include stevia and fair trade certified cane sugar. Having your selection in a bowl is one of five choices. The others are mission-style burritos, tacos, salads and the signature El Masivo, a hearty one-pound burrito.

Cinco Cantina is located in Duquesne’s newly renovated Options Food Court on the fifth floor (to which the concept name also alludes) of the student union building, along with the Chick-fil-A unit. The renovation was comprehensive but completed in time for the fall 2017 semester.

“We gutted the food court, took it down to the bare walls,” Manz says of the infrastructure project. “There were four points of service previously and we took it down to two larger, more complete operations [Cinco Cantina and Chick-fil-A] that have been fantastic, and student engagement has been excellent.”

Parkhurst, based in Pittsburgh, is a unit of the Eat ‘n Park Hospitality Group. It operates onsite dining at higher education and corporate sites. The company placed No. 19 on FM’s 2018 Top 50 Contract Management Companies listing with 2017 revenues of $198 million.