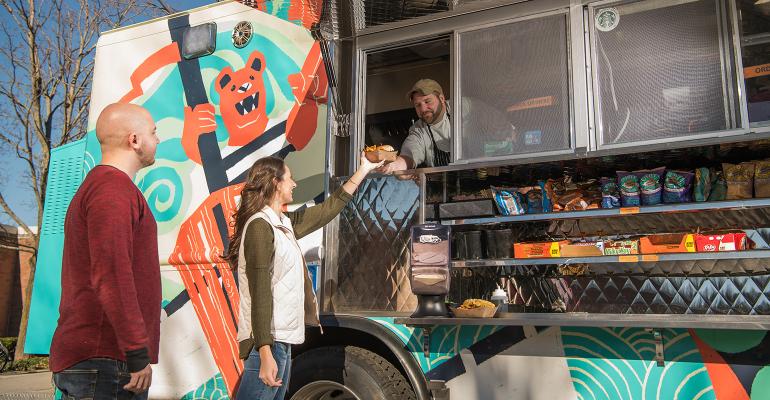 Penn State Behrend’s new food truck is on a roll

When Penn State Behrend (Erie, Pa.) students asked for a campus food truck two years ago, Mike Lindner, director of housing and foodservices, agreed to pursue the idea. But to turn their request into reality, he first had to overcome a number of hurdles.

All of Penn State University’s (PSU) foodservices are centrally administered from State College, Pa. And up to this point, the system had no food trucks on any of its campuses. In order to get the idea off the ground, Lindner and his team, including Managing Chef Kyle Coverdale, first had to create a full-fledged proposal to be approved by Chris Hurley, senior director of housing and foodservices for PSU.

“We did a lot of research,” says Lindner. “We went to the NRA show and to NACAS. We also talked with colleagues from Ohio University and West Point. We started drafting a menu and researching different food truck builds and bodies. All eyes are on us so we had to do this right.”

From the fall of 2015 until the spring of 2016, Lindner and his team worked up the business plan and began shopping for trucks. Initially, they thought it would be simpler to buy an already built truck, but that proved too restrictive, and in retrospect is Lindner’s biggest regret about the process.

“We spent months looking for a truck that didn’t exist,” says Lindner. “Most food trucks are built to serve either a handful of dishes or a specific style of cuisine. Since we wanted to offer a lot more variety, we needed to specify the exact equipment.”

Ultimately, the university decided to build a brand-new 31-foot truck, naming it The Behrend Clipper. (The college has always named its dining and residence halls after the ships and captains in the Battle of 1812. The food truck continues that theme as the Clipper was a sailing ship from the same era.)

In addition to a steering wheel and a driver’s seat, the truck features a two-bay fryer, a 36” flattop, a 36” char broiler, a two-burner range, an oven, a sandwich board, an upright freezer, an upright refrigerator, an upright hot holding cabinet, a sink, two generators and an independent water system. Additional menu-specific countertop items, such as waffle irons, are brought on as needed.

“The Clipper is well-outfitted,” says Lindner. “It’s a true mobile kitchen and it’s cost—somewhere between $150,000 and $200,000—is far less than building a brand new free-standing operation.”

The Clipper can be found on campus on Sunday mornings between 8:30 a.m. and 11:45 a.m. It also makes the breakfast, lunch and late-night rounds Monday through Friday. Breakfast items include the big boy sandwich, waffle sandwich, and bacon or sausage dippers. For lunch and dinner, burgers and sandwiches are always on the menu, along with rotating feature tacos, Cubanos, grilled cheese sandwiches and sliders. French fries, potato chips, Starbucks Cold Brew, and an assortment of soft drinks, water and iced tea are also available.

These items are prepared by chef James Nicosia and his assistant, Shelly Sonney. Nicosia was specifically hired for the truck, while Sonney was brought in from another operation. Additional staff members have been cross-trained so that others can also operate the truck as needed.

“The biggest challenge for us at first was site location and understanding where our customers need us most,” says Lindner.

Initially, Lindner allowed two sets of criteria to determine where to park the truck: 1.) somewhere dining services didn’t have a strong presence; and 2.) somewhere there were a lot of students.

“We were right in some cases and wrong in others,” says Lindner. “For example, we parked in an area where students were moving between classes, thinking many would stop on their way. But they didn’t. We discovered that students on that part of campus during that time of day don’t have time to stop.”

The team re-evaluated, looked at class schedules to find bigger gaps and found that the most successful places to park the truck are near the residence halls late night, as well as near other dining halls during peak meal periods.

“The truck has helped us to right-size our operation,” says Lindner, noting that the Clipper hasn’t cannibalized any free-standing operations. Quite the opposite, actually. “It allows us to add capacity and give students a meal option if they don’t have the time to go through a dining hall.”

In addition to building the physical truck, there were some infrastructure upgrades, like an RV dump station and a wireless network, that were included as part of the project.

“In order to make the food truck a successful venture, we had to find a way to not only take cash but also be able to accept credit cards as well as Lion cash [PSU’s meal plan currency],” says Lindner, who worked closely with IT and the school’s POS provider to create a wireless network that met all of PSU’s security compliance. “It’s the first of its kind within the university.”

As winter approaches, Lindner hopes to expand the Clipper’s use on campus.

“The truck has been a hit during admission and sporting events,” he says. “All eyes are watching how it performs. So far, it’s been tremendously successful.”