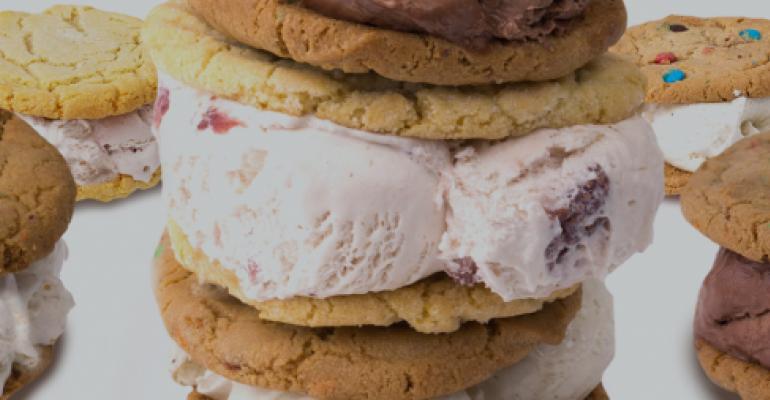 Penn State Berkey Creamery and the Penn State Bakery have teamed up to create various new ice cream cookie sandwiches that have boosted business for both operations.

Ice cream and cookies combined in ice cream/cookie sandwiches are a traditional treat with an infinity of possibilities dependent on the flavor of the ice cream and the nature of the cookie. So when two highly skilled, quality-conscious entities like the Penn State Berkey Creamery and the Penn State Bakery join forces to design combos made with their respective specialty creations, the results can be magical.

With COVID otherwise hampering business over the past year, the two operations teamed up to create various new ice cream cookie sandwich combinations that are also now marketed not only in the creamery’s Penn State campus retail store but in university dining commons and Commonwealth Campus (extension campus) stores, and are also are available for purchase on the creamery’s website for shipment anywhere in the continental U.S. That e-commerce component has been especially effective, with an average of some 600 orders a month, explains Jim Brown, sales & marketing manager for the Berkey Creamery.

“We were both looking for ways to expand business, so we all came together and figured, with COVID going the way it was, we have a lot of challenges ahead of us, so we have to find new out-of-the-box-thinking ways of selling our products,” he notes. 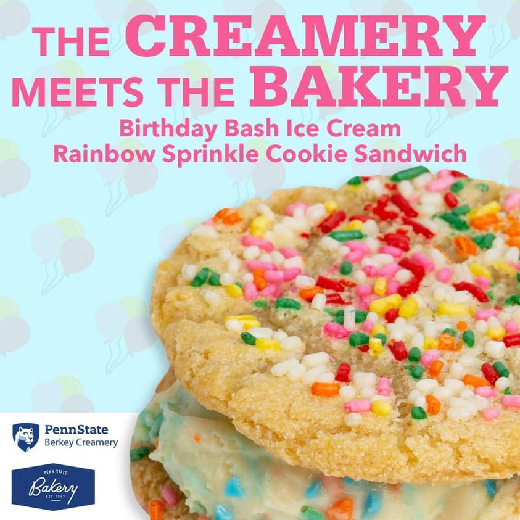 To expand the range of ice cream cookie sandwich offerings, the creamery worked with Penn State Bakery Executive Pastry Chef Heather Luse to create a series of 12 new cookie and ice cream combinations themed to specific holidays and seasons and designed to be offered monthly over the course of a year.

So now, each month sees three flavors available—the vanilla and chocolate candied cookie sandwiches the creamery traditionally sold in its store, plus that month’s special flavor.

The specialty combos launched this past February with a Valentine’s Day themed sugar cookie packed with strawberry ice cream. That was followed in March with a St. Patrick’s Day themed combo—“one of our most popular, almost as popular as our traditional ones,” Brown notes—that had Bittersweet Mint ice cream on a double-dark chocolate cookie.

“Bittersweet Mint is our second-biggest flavor and to put it on a double-dark chocolate cookie was a perfect match,” he suggests.

The creamery originally began selling a basic ice cream sandwich made with vanilla ice cream and chocolate chip cookies some 10-15 years ago, Brown explains. “It then expanded out to different flavors,” he adds. “We had about five different flavors that we sold in the store.”

When COVID hit, the ice cream sandwiches—already individually packaged and convenient to grab and go—became even more popular and led to the decision to expand the line through the alliance with Penn State Bakery.

Between the popularity of the products and the expanded distribution though campus dining and online, Brown says he expects monthly sales to as much as triple from the around 3,000 sandwiches to close to 10,000, assuming pandemic-related situations don’t crop up again. As for the specialty flavor schedule once the current 12-month cycle runs its course, he says it will depend on sales and popularity data for the individual creations, with some being reintroduced and others dropped at least for a time in favor of new combinations.

Penn State’s Berkey Creamery, the largest university creamery in the United States, produces cheese, milk, yogurt and sour cream, as well as a variety of other products such as juices, lemonade and iced teas in addition to its ice creams, all made for sale and distribution to the Penn State community. Cows from the university’s dairy herd provide milk for its fresh dairy products, averaging about four days from cow to final product.