College of Agricultural sciences, Michael Houtz
To educate the community and increase visibility, the marketing team created signage for the dining hall, including wraps for milk dispensers.
News & Trends>Colleges & Universities

For generations, a visit to the Penn State Berkey Creamery for a scoop of ice cream has been a pilgrimage of sorts for university students, staff, faculty and guests.

The creamery has been part of the fabric of the school since 1865, when it was founded on campus next to a blacksmith shop. Today, it’s a top-of-the-line operation inside the largest food science building in the country, located on Penn State’s largest campus, University Park.

For many years, however, few people on campus knew the full range of the creamery’s products, made primarily from milk produced by about 200 cows at the campus dairy barns. (Twenty percent comes from a local dairy farm.) And diners weren’t aware that the university serves creamery products in their University Park dining halls, including fluid milk, yogurt, plain and flavored cream cheeses, sour cream, ricotta, aged cheddar, and value-added spreads and dips. 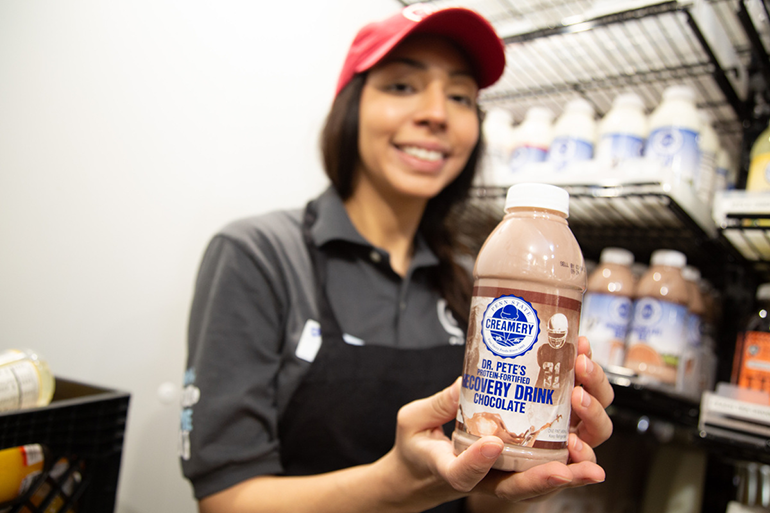 Penn State’s dining program replaced bulk dairy from a distributor for its commonwealth campuses with products from the campus creamery, including fluid milk, yogurt and sour cream.

Several years ago, when Jim Brown and John Mondock, director of purchasing for Housing & Foodservice, started talking about expanding the partnership between the creamery and dining operations, the creamery had no retail branding in place.

To get the word out about the quality and origin of dairy products in the university community, they put together a marketing kit that has elevated the profile of the creamery products in dining halls and across the statewide network of commonwealth campuses.

Lauren Hassinger, marketing strategy specialist for the creamery through the College of Agricultural Sciences, worked on marketing collateral to highlight the use of creamery products in the dining halls. Her team developed wraps for the milk dispensers that identify the contents as milk from the creamery, highlighting that it’s sourced from Penn State cows. (“From our cows to your cup,” is the tagline.) They also created signage to draw attention to other dairy products.

Hassinger led visits to each commonwealth campus to explore wholesale expansion as well. Until last semester, dairy products for commonwealth campuses were purchased through a distributor. She was met with “an outcry” for ice creams and other creamery products. Pints of Death by Chocolate, Cookies-N-Cream, Vanilla Bean and Alumni Swirl are more than delicious additions to commonwealth campus freezers. They help remote members feel included in the Penn State experience. 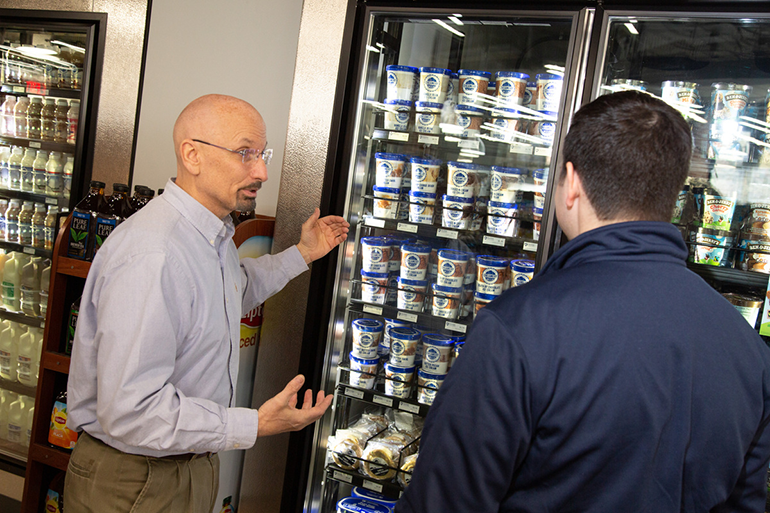 Jim Brown shows off pints from the creamery. Penn State Berkey Creamery ice cream is a tradition and point of pride for the university.

Housing & Foodservice has started rolling out creamery products to five commonwealth campuses. The biggest hurdle in the expansion was working around capacity constraints on the foodservice trucks, a challenge that took a couple of weeks to iron out. The creamery delivers its own products to locations at University Park but relies on foodservice distribution channels to funnel their products elsewhere.

The dining program uses its bulk buying power to supply the creamery with things such as sugar and paper products, to help them keep costs down. Previously, the creamery ordered such items directly from manufacturers.

Brown and Mondock say the close partnership is a win-win situation. The creamery products cost a little more but purchasing them for all campuses “keeps it in the family,” Mondock says. “Instead of allowing some of that profit to be outside the university, we keep it all in the Penn State community.”

Working closely to create and distribute more products internally is more than good fiscal sense. It’s a flexible model. When the dining team discovered that the campus cream cheese was too soft to use in its cheesecakes, the creamery reformulated the recipe. The creamery is also responsive to requests for changes to packaging and volume.

Campus collaborations also encourage creativity and growth. The creamery started making ice cream sandwiches, for instance, using cookies purchased from the Penn State Bakery. They were so popular that Housing & Foodservice started purchasing them for the dining program, leading to a production boom. The creamery makes about 4,000 housemade sandwiches per month.

“The quality of the creamery products is over the top,” Mondock says. “It’s all clean ingredients. There are no preservatives. It really is, in my opinion, better than anything else out there.”

Brown gives credit to his team and to the agricultural college for producing high-quality milk. Everyone involved in the process, he says, “talks, lives and breathes food science and research and safety.”

With distribution flowing, community members are enthusiastic that they have access to a quintessential part of Penn State. So are Brown and Mondock, who are looking ahead to more growth.

“I think,” Brown says, “this is just the beginning.”