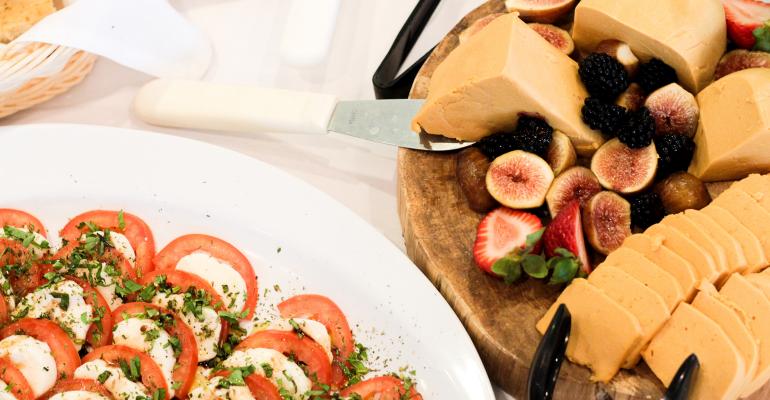 Plant-based charcuterie debuts at Rice U

“I can’t believe it’s not meat and cheese!” From creating pastrami that slices on a meat slicer—but isn’t meat—to making cheese without dairy (or cashews), Rice chef creates plant-based formulas that just might fool you.

For many chefs, this represents the ultimate challenge: turning plants into convincing, delicious versions of items normally impossible to imagine without animals or dairy products. Few items seem more daunting in this respect than a charcuterie board, a beautiful arrangement that’s meaty and cheesy to the extreme. For more than a year, the vision of a totally plant-based charcuterie board became the obsession of Rice University’s Senior Executive Chef Roger Elkhouri.

Elkhouri’s quest to create a plant-based charcuterie board worth savoring coincided with Rice Dining’s participation in #ourplantbasedjourney, an initiative to get away from confining labels, especially “vegan.”

“We’re getting away from the word ‘vegan’ because we want to be inclusive, and vegan can have some negative connotations,” says Susann Glenn, Rice Dining marketing pro.

“At first, people were saying, ‘Oh, this is just for vegans,’ but no, this for everyone; that’s the whole point,” Elkhouri says. A few of the components he used:

• seitan: made of wheat gluten, seitan is one of the main ingredients in creating lunch meat-like slices; water, seasoning and aromatics are added and the seitan is baked in forms
• coconut milk: traditionally, vegan cheeses rely on ground cashews for the creamy texture, but what about those with nut allergies? The answer is coconut milk, which can mimic the sweetness in some cheeses, like mozzarella; coconut milk was also used for vegan mayo
• liquid smoke: to add that smoky flavor to deli “meats” and “cheeses”
• seasonings and condiments: a Reuben sandwich tastes the way it does largely because of seasonings, sauerkraut and Russian dressing, so Elkhouri applied that principle to the charcuterie tray

Both Elkhouri and Curet say that forgoing pre-made mixes for plant-based meats isn’t worth it.

“Seitan is very labor intensive,” Curet says. “Some of the mixes give you a good jump start, but there’s still a lot of labor involved. Plus, we want to control everything and make it nice.”

After lots of testing, the winning recipes emerged, and soon, a student intern and devoted carnivore was biting into a vegan Reuben.

“My picky intern, who would eat beef hot dogs with chili every day if he could, tried the plant-based Reuben and he was so excited,” Glenn says. “He said, ‘This tastes just like a Reuben! That’s what we’re going for.” In another instance, Elkhouri, working in the kitchen, offered a couple of employees sandwiches with “brisket,” caramelized onions and barbecue sauce. They were finished with the sandwiches and singing the brisket’s praises before Elkhouri informed them it was all plant-based, he recounts.

The other “meats” Elkhouri has been able to create so far include roast beef, salami, rosemary roast turkey, corned beef and pastrami. Cheeses include mozzarella, smoked cheddar, dill Havarti, provolone and paprika cheese ball. All the spreads for an extra accent are plant-based, too: Thousand Island, stoneground mustard and plant-based mayo.

This fall, the plant-based charcuterie station will be featured at a weekday lunch station with an attendant on hand to slice the “meat” for each order.

“You can slice this stuff on a slicer,” Curet says. “That’s pretty impressive, because if we had to hand-slice, it would be more challenging.”

“Throughout the testing, some were very tough and some wouldn’t hold up to the slicer,” he says. “I wanted a slice that looks like a deli slice and melts in your mouth. I set very high standards.”