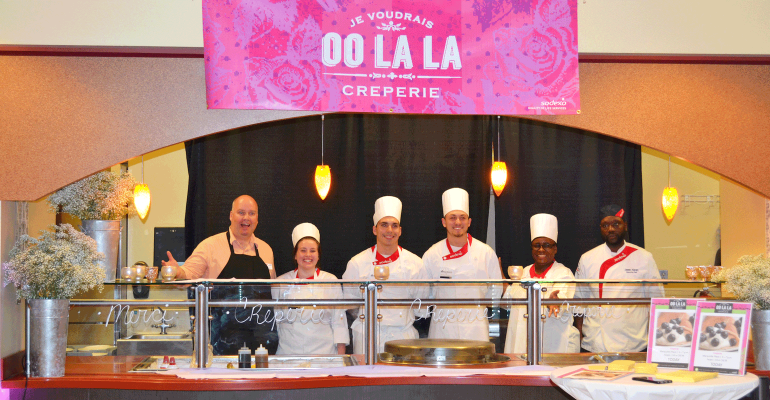 Sodexo Campus Services
The French-themed Oo La La creperie is one of a series of pop-up restaurant concepts that enliven dining at Marquette.
News & Trends>Colleges & Universities

One shot deal concepts ranging from freshly smoked barbecue and a ramen bar to a French creperie crop up in different venues at different dayparts to keep monotony at bay on campus.

Last week it was a ramen bar at what is ordinarily a soup station, and next week it will be a French-style creperie at what is now a Mexican food station. Pop-up restaurants are, well, popping up at different venues on the campus of Marquette University in Milwaukee.

In addition to refreshing some of the school’s dining venues, the company has been adding some novelty to the everyday dining experience at Marquette with the pop-up program, which is scheduled to continue for the remainder of the school year with weekly (and sometimes multiweekly) appearances of unique cuisine options at various retail and residential dining venues around campus.

“It’s really to get rid of the monotony of everyday college dining,” says Kevin Gilligan, Sodexo’s district manager for Wisconsin. “It’s meant as a game-changer [and] a value-add and to really just keep the program exciting and moving forward. And,” he adds, if a pop-up concept proves especially popular, “it can become part of our ongoing rotation.”

The pop-ups feature different cuisine concepts and can be held in either the lunch or dinner daypart. Concepts coming up over the rest of the fall semester include Burgers and Shakes, Brazilian and American Regional, which will feature student-nominated favorites from the different areas of the country they hail from.

The first pop-up was held Sept. 5, a few weeks after school opened and after students got a chance to get acclimated. It featured a barbecue concept called BBQ Blues that held service over dinnertime.

“We have a chef on campus who has won national competitions with his [meat] smoking,” explains Donato Guida, general manager for Sodexo Campus Services at Marquette. “He brought his own smoker in and did a brisket in the parking lot in front of [the Alumni Memorial Union] where students could smell it all day long. So there was buzz even before it opened.”

Promotion of the pop-up program is conducted across a variety of platforms, from digital menu board notices and signage to emails, mailed flyers and mentions in campus media organs.

“The students are starting to catch on,” says Guida, citing the recent Ramen Bar pop-up that generated an additional 150 customers above the average traffic at the soup station where it was deployed. The pop-ups are not merely menu variations at the stations from which they operate but offer a completely changed atmosphere. For instance, the soup station had completely different décor when it temporarily converted to the Ramen Bar, with even the chefs working the station wearing different uniforms than usual.

Converting a soup station to a ramen station may not be a big stretch in terms of concept look but not all the pop-ups are held in such complementary spaces. For instance, the creperie scheduled for Oct. 11 will operate from the Ultimate Baja station, with the conversion involving everything from different lighting and signage to putting pictures of Paris on the walls to completely transform what is ordinarily a Mexican-themed station into a French crepe concept complete with Parisian atmosphere.

“When you walk in it will look like an absolutely different restaurant,” Guida says. “You would never know it was a Mexican restaurant.”

The regular weekly pop-up schedule has been well publicized, but the program also offers some more impulsive appearances of unique cuisine concepts at other than those regularly scheduled ones. These get heavy social media push to generate awareness and anticipation while adding another layer of variety and spontaneity to the dining program.

A few of the very popular pop-up concepts such as the Ramen Bar can be scheduled for more than one appearance a semester but Sodexo tries to keep this to a minimum as the whole point of the program is to offer unique concepts to break the monotony, Guida stresses.

Some of the concepts are drawn from Sodexo’s extensive corporate portfolio while others were developed on the Marquette campus exclusively to fit student preferences and take advantage of readily available in-house culinary talent.

BBQ Blues and its leveraging of the expertise of on-staff barbecue master Jason Alston is an example, Guida notes, as is the Ramen Bar, which was developed and overseen by another staff chef who had had his own ramen restaurant.

“We have a very talented, diverse group and we can do a lot of authentic cuisines,” he says proudly.