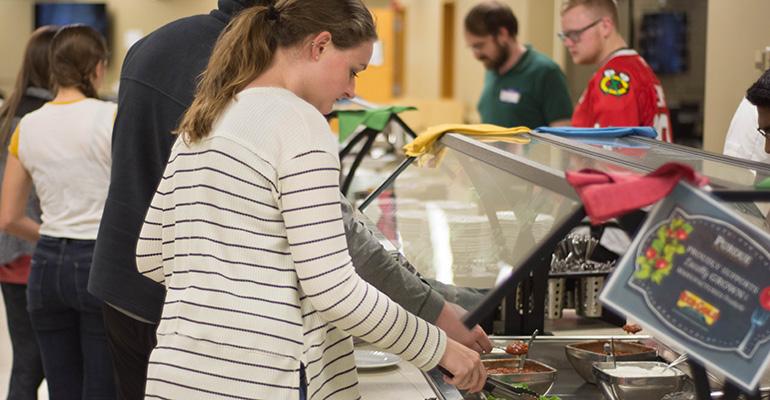 A recent highlight for Purdue Dining is the 7-Ways campaign, designed to deal with extra crowds generated by increased numbers of meal plan participants with strategies like expanded retail meal swipes and residential dining pop-ups.

Purdue Dining & Catering (PDC) will be going into its seventh year of no board rate increases next year. It had introduced a seven-meal plan with no dining dollars in the fall of 2013, when it gave five percent of the board cost back to the students in order to meet an Affordability Challenge. The following year saw another five-percent reduction to the students.

The result was the award winning 7-Ways Campaign introduced in fall 2016 to handle 570 additional diners during 5 p.m.– 7 p.m. dinner period Monday through Thursday, which incorporated all departments within PDC to meet the challenge. The initiative included offering meal swipes in four retail locations in the Purdue Memorial Union; creating a new pizza concept, Pete’s ZA at Meredith, offering a 12-inch pizza and a fountain beverage for a meal swipe; and featuring the catering and culinary staff in a pop-up concept in the Gathering Place at Meredith, which won an FM Best Concept Award last year.

The fall of 2016 saw the opening of the Cosi restaurant in the new Honors College, the installation of a new, larger Mongolian grill and the debut of rolled sushi at the Earhart Dining Court and the addition of a line monitoring feature to the Purdue Dining App.

This past fall, an Au Bon Pain unit opened in the new Wilmeth Active Learning Center, the Daily Bite food truck went to off-campus apartments that housed students with meal plans as a customer service initiative, a new Boiler BBQ concept was introduced at Ford Dining Court and meal swipes began to be accepted for breakfast at the Sagamore Restaurant in the Purdue Memorial Union.

PDC’s partnerships with the Purdue Student Farm, the Purdue Research Farm and Purdue’s Butcher Block meat production plant continue to expand with more variety and products each year, as, for example, with volunteers and staff participating in the harvesting at the Research Farm. The department also now has over a hundred academic partnerships and growing, with teams of four to six students working on efficiency and design projects for PDC.