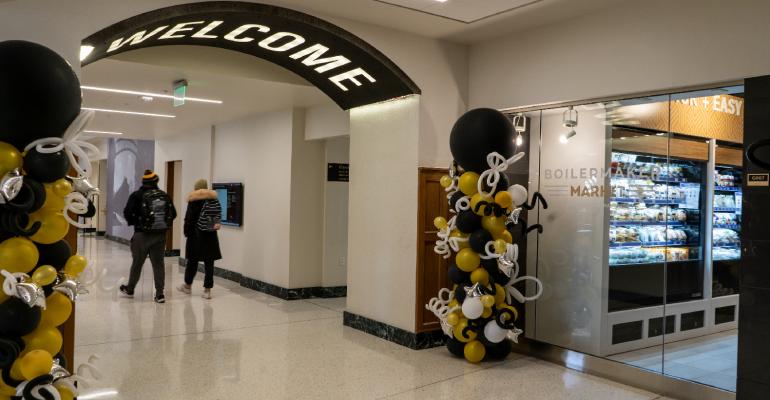 Start Slideshow ›
After about $47 million in renovations since it closed in August 2020, the traditional campus gathering spot is now a modern, brightly lit space with abundant seating and dining choices.

After being shuttered for some 16 months to complete renovations costing around $47 million, the Purdue Memorial Union basement reopened on Jan. 10 to resume its traditional role on the Purdue University campus as a spot for socializing, studying or grabbing something to eat or drink. Appropriately, the opening also coincides with the Union’s 100th anniversary, as it originally debuted in 1922.

In the basement dining area, the eating and drinking options have expanded from the seven or eight restaurants the space hosted previously to a dozen now, while the ambiance now is enhanced by plenty of natural light.

Cornerstone first arrived at Purdue with an experiential learning course four years ago in which Purdue students were tasked with implementing a pop-up of Cornerstone concept Urbanbelly as a course project. The students ran and marketed the pop-up and it served as a test run for the partnership that has now arrived on campus. Meanwhile, Chef Kim’s Ramen Bar and Pizza/Parm concepts debuted as pop-up concepts last year.

Among the other Cornerstone concepts, Fresh Fare menus salads and bowls with clean flavors and an emphasis on dairy-free and gluten-free options while J. Manion-Latin Inspired offers Chef John Manion’s creative take on Brazilian street food and Sol Toro is a taco concept.

The other concepts in the renovated Union are…

In addition, the Union includes a Boilermaker Market c-store selling food and beverages.

The renovation was designed by Workshop Architects with foodservice design provided by Tipton Associates, in partnership with Purdue Dining/Aramark.

Here’s a closer look at the new Purdue Memorial Union…