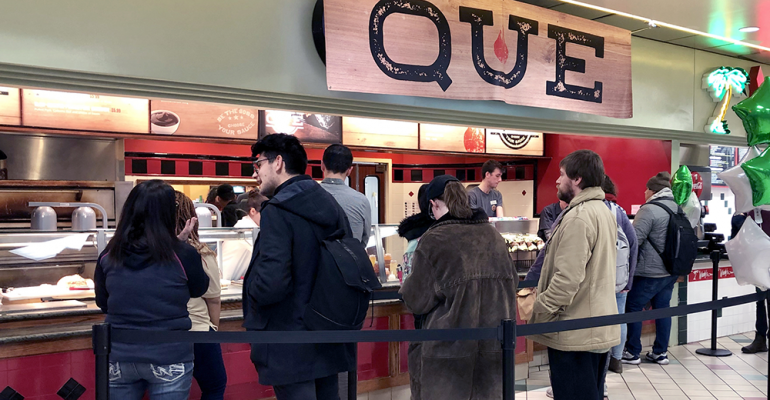 They’re queuing up for QUE, the new in-house-developed barbecue concept that opened earlier this month in the Crossroads food court inside the Michigan State University (MSU) International Center.

The International Center is in the heart of the MSU campus and includes classrooms and student services like the ID office, a student credit union and the Spartan Bookstore. In addition to QUE, the Crossroads food court also includes Subway and Panda Express chain units as well as a local restaurant concept called Woody’s Oasis that serves Mediterranean cuisine and also serves as a supplier of specialty products to MSU residential dining locations.

QUE is located in a space formerly occupied by an underperforming pizza concept called Union Pizzeria, and it has definitely generated better numbers than its predecessor, at least in the early going, says Kurt Kwiatkowski, corporate chef for MSU Culinary Services, who adds that the decision to change from pizza to a barbecue concept for the location was based on careful observation of trends. 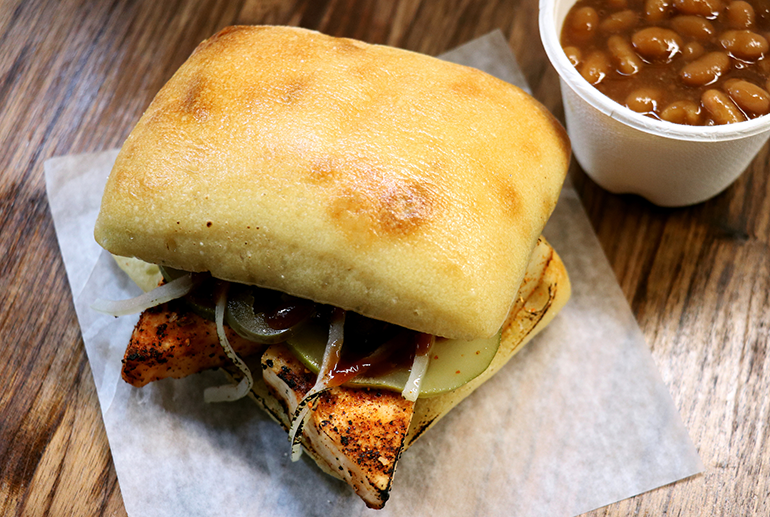 The vegetarian grilled jackfruit sandwich has been the surprise hit of the menu in the early going.

“We are seeing barbecue concepts being very, very successful” both on and off campus, Kwiatkowski explains. “The barbecue concept we have on campus [in one of the residential dining halls] is extremely successful. Our guests really, really like it, so this was about listening to our guest needs. It also seemed that they were voting their dollars away from pizza [at Crossroads], and were looking for something else, according to surveys we did.”

“It’s been constant lines, to be honest [at QUE], far above what we imagined,” adds Kari Magee, a retail operation chef who did much of the menu development for QUE. “I know the student crew there has been absolutely shocked at how busy they have been.”

“It’s rivaling Panda Express [in terms of customer counts in Crossroads], which is something that usually never happens,” notes Kwiatkowski, who suggests the Crossroads food stations traditionally see one to two thousand daily transactions among them between 11 a.m. and 1 p.m. during the week. The food court is closed on weekends.

Michelle Pell, retail branded concepts manager who oversees operations at the Crossroads food court, says she hasn’t analyzed the numbers yet to determine whether the presence of QUE has bumped overall transaction counts in Crossroads or just reallocated them, but she is sure that it has changed some traffic patterns.

“[Union Pizzeria] never had much of a line to where we needed stanchions like [we do at] Subway and Panda [Express], but now we have a line [at QUE] that we need to manage as well,” she says. “Anecdotally, I can say that we do see people walking over to Panda or [the other stations] but then choosing the QUE line.”

The transformation from pizza to barbecue required a somewhat larger staff at the station, a situation compounded by its unexpected busyness. 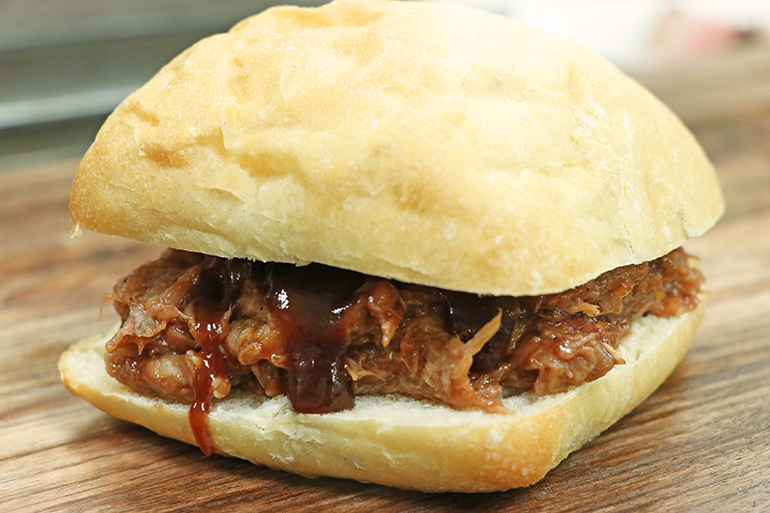 Another favorite item at QUE is this shredded BBQ pork sandwich.

“It used to be a maximum three-person place, but right now it’s minimally a five-person place, just due to the nature of [the concept] versus what we needed for pizza,” says Pell. “And then, just due to traffic and demand we’ve now needed a few more people on the front line to expedite the orders, but that was all done with just shifting staff, not new hires.”

The only new piece of equipment purchased for the station was a Cres-Cor Roast-N-Hold Oven with a smoke option, but most of the production for QUE is done in MSU’s central kitchen. Cooked product is then transported to QUE, where it is re-thermed and then sliced or pulled for assembly into individual dishes in front of guests.

Kwiatkowski says the approach of doing a lot of the preparation away from the station is not a drawback and in fact has impeccable commercial antecedents. He cites the food halls he has visited in cities like Chicago and Toronto, where they all have a barbecue concept as one of the stations, “but none of them actually do any cooking onsite, so I filed that away in the back of my mind,” he says.

The offerings range from brisket—the top seller so far—to smoked turkey, pulled pork and a vegan jackfruit option that has been the surprise hit of the place in the early going—its popularity had the dining team scrambling to keep up with demand as the station went through what was predicted to be a week’s worth of the product in the first three days.

Standard sides include mac and cheese (also available as an entrée), baked beans and a specialty coleslaw made with vinaigrette. A signature touch is the choice of a dozen sauces that customers can choose from, including international flavors like Jamaican jerk, Korean gochujang and serrano rioja.