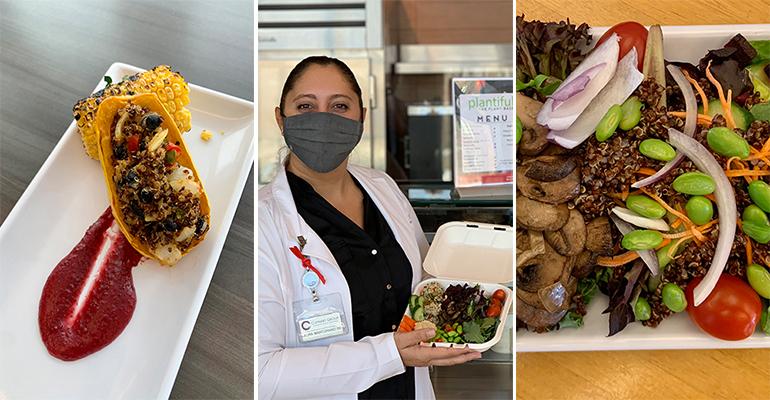 Rooted is an existing station concept operated by management company CulinArt at Stony Brook University in New York. This spring, the concept was enhanced with new dishes that play off what was being offered at the nearby Chef’s Table station, but with a vegan twist, so Rooted’s three-week menu cycle includes global cuisines such as Indian, Middle Eastern, African and many other regions and countries around the world.

Also new is an extension of the Rooted station called Plantiful Table that incorporates the options of a salad green, grain and “energizer” component such as beans, lentils, seeds and various toppings, so instead of simple side salads, students can have staff build composed salads with only the items they enjoy, thus limiting food waste and the use of additional plastic containers.

“We added the Plantiful Table and new Rooted recipes to incorporate more plant-based beginnings into student lifestyles,” explains Laura Martorano, MS, RD, CDN.  “A student can be a flexitarian, vegetarian, carnivore or just someone who wants to eat healthier, and it enables them to have more choices.”

The approach of using staff service to construct the customized salads is a necessity given the current environment, she adds.

“Self-service salad stations were removed because of COVID restrictions, so it is nice to be able to offer a customizable salad station again in these challenging times. I felt that adding composed salads back into the dine-in program was important because it enables students to be creative with their meals and it offers a plant-base start to any meal.”

The recharged Rooted was developed in response to customer demand, Martorano says.

“Each semester the Faculty Student Association collects feedback about student preferences through our online feedback forms, social media channels, QR codes in the dining locations and students connecting with dining managers at the location. The fall semester has shown that many students are looking for tasty ways to add more plant-based foods into their diet.”

Rooted and Plantiful are available at both campus dine-in locations.

“I like offering different menu items at each location so there is more variety on campus,” Martorano offers. “It can also be a motivating factor for the students to get more exercise by walking across campus, especially with many classes being online!”

Here’s a photo tour of Rooted and Plantiful Table…