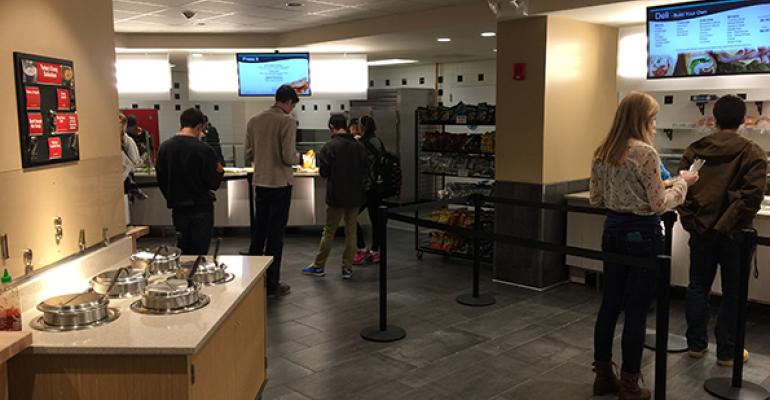 Until recently, the Eagle’s Nest, a retail location inside Boston College’s (BC) McElroy Commons, wasn’t much to look at. The 3,300-square-foot sandwich-and-salad stop is located on the ground floor of the McElroy Commons, which houses one of BC’s main dining halls on the third floor.

“About 25 years ago, they did a ‘face-lift’ on the Nest, but that was just some neon signs,” Forcier says.

The new look is decidedly more upscale with materials like granite, marble and stainless steel. The new tables are butcher block, and in the serving areas, old-school hotel pans in hot wells have been replaced with stylish tile cut-outs for a nicer presentation.

“When you walk in, it’s just totally high end,” Forcier says, adding that the space is cleaner and brighter. Since the reopening at the beginning of the semester, the retail option has been a success with customers as well as employees. Forcier says the Eagle’s Nest is a sought-after place for student employees to work and 1,800 meals a day, on average, are served between the hours of 11 a.m. and 3:30 p.m., Monday through Friday.

It’s not just about looking better—versatility and improved traffic flow were key factors in the remodel as well. The new design elements, especially traffic flow, have made a positive impression, as evidenced by an editorial in the BC student newspaper, The Heights, which stated that “the perplexing and traffic-inducing line arrangement has been redone to promote efficiency and dispel confusion.”

The menu also has been revamped, leaning more toward upscale eatery than corner deli. That menu change also plays into the customization trend that Millennials seek out when dining. 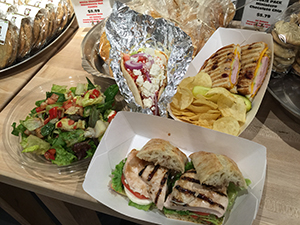 “Customers go up to the line and build exactly what they want,” Forcier says. “Upstairs in the dining hall it’s more, ‘This is the entrée,’ but at the Eagle’s Nest, you can get a Tuscan Chicken Sandwich with mayo instead of pesto, because we’re making it to order.”

The Eagle’s nest is divided into several stations: Press It serves paninis and flatbread; Toss It is a chopped salad station (Buffalo Chicken is a best-seller); and Med It is a brand new Mediterranean concept that offers items including falafel. In addition to those branded stations, there is also  another specialty sandwich line, an extensive soup collection and sushi.

There’s no kitchen inside the Eagle’s Nest, so ingredients for menu items are cooked upstairs in a central production kitchen. Additional prep work and final assembly happen at the Eagle’s Nest.

Much of the new design has been focused on allowing versatility and even last-minute changes on the menu, Forcier says. “The hot and cold wells can be switched around during different times of day,” he says, adding that the menu will continue to be updated and on-trend, keeping the Eagle’s Nest “a cool retail location.”

One On One: How one of the country’s leading universities has leaned on students during COVID
Apr 16, 2021

All about the University of Miami’s hot new all-day-breakfast concept
Apr 15, 2021