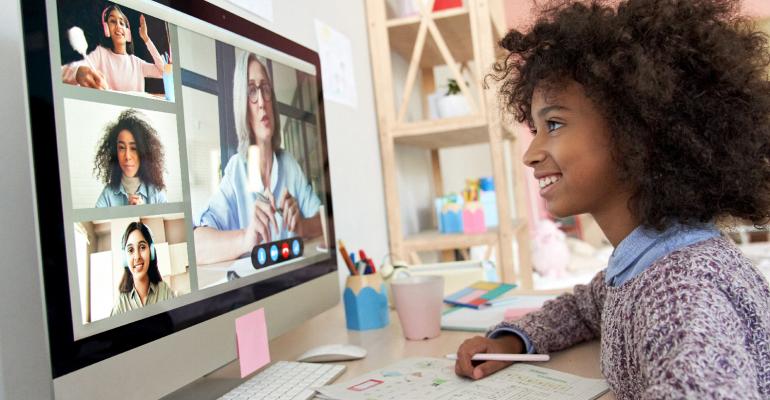 insta_photos / iStock / Getty Images Plus
Among school districts, PGCS has announced that it will start the spring term on Jan. 3 online, with students slated to return to the classroom on Jan. 18.
News & Trends>Colleges & Universities

A number of universities, school districts and businesses are reverting to online operation in reaction to a surge in COVID variant infections.

With the highly infectious Omicron variant of the COVID virus raging across the country, a number of education and business entities are reverting to remote operation policies developed during the initial COVID pandemic for at least a portion of January. The wave of temporary closures and reversions to online activity threatens to derail what had been a gradual return to some form of “normal” over the latter part of 2021 not only for staff and students but the dining programs that had been looking forward to expanding their services—and improving their financials—with the return of growing numbers of customers in the new year.

Among school districts announcing delayed returns to in-person classes over the past several weeks are Prince George’s County Schools (PGCS) in Maryland; Cleveland Public Schools; a number of districts in New Jersey; and the Lansing and Ann Arbor School Districts in Michigan. Meanwhile, teacher unions are pushing for similar policies in major districts like New York City, Chicago and statewide across the Commonwealth of Massachusetts.

The urge to go remote at least temporarily has also affected the resumption of spring class schedules at a number of major universities, including Northwestern, Tulane, Georgetown, Michigan State, the University of Connecticut (UConn), Vanderbilt, Duke, Eastern Michigan (EMU) and Washington University in St. Louis (WUSL).

In the high end corporate dining market, financial firms were expected to be among the leaders in getting staff back in the office given cultural, security and productivity factors but now a number of prominent firms such as Wells Fargo, JP Morgan and Bank of America have announced delays.

Among school districts, PGCS has announced that it will start the spring term on Jan. 3 online, with students slated to return to the classroom on Jan. 18, while Cleveland Public Schools and Lansing Schools will be remote their first week back starting Jan. 3 and classes at Ann Arbor Schools will remain online between Jan. 5 and Jan. 10. At least eight districts in New Jersey will be remote the first week back while Newark, the state’s largest, plans to be remote for the first two weeks.

In Chicago, the Chicago Teachers Union has scheduled a vote for its more than 25,000 members on Jan. 4 asking if they support refusing to work in-person starting the next day and working virtually instead, while in New York the teachers union is urging new mayor Eric Adams to implement a temporary halt to in-person classes, something he has been resisting.

In addition, while not directly related to the virus surge, nine schools in the Columbus School District and a dozen in the Pittsburgh School District will be remote due to staff shortages.

In the working world, Wells Fargo & Co has announced that it has delayed its plans for employees to return to the office "given the changing external environment," according to a statement, with new plans for a full return set to be announced sometime early in the new year. About 100,000 of its over 250,000 employees have been reporting remotely to Wells Fargo locations throughout the pandemic, with offices open only for those who have been vaccinated.

Meanwhile, JPMorgan Chase & Co has offered its staff the option of working from home for the first two weeks of 2022, though all are expected to return to office no later than Feb. 1, according to a memo seen by Reuters. Similarly, Bank of America Corp is encouraging employees to work remotely in the first week of January, according to a person familiar with the matter.

The danger for onsite dining in all this is the uncertainty it produces. While most of these announcements are purportedly for only a short term—a few weeks at most—there’s no guarantee that they won’t extend just as the initial reaction to the pandemic back in spring 2020 elongated from “a few weeks to flatten the curve” into a societal slow/shutdown that is now nearing its second anniversary. Since COVID and its variants is not likely to be eradicated in the next few weeks, the question for businesses and institutions will be to evaluate how much risk they are willing to tolerate to return to in-person operation versus the downsides of continued remote activity.