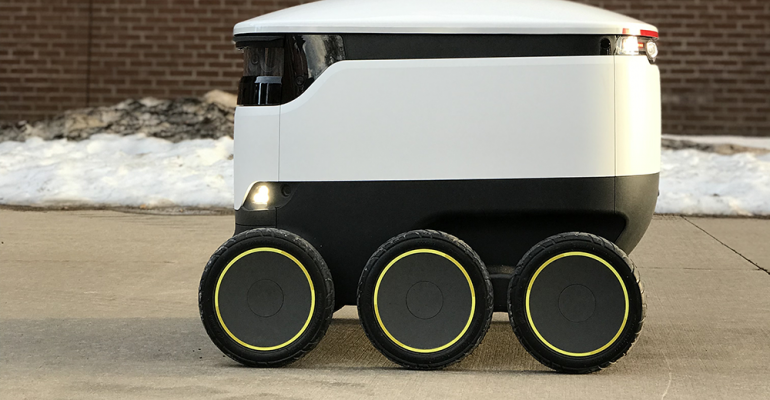 A robot fleet of more than 30 sidewalk-navigating robots are delivering food on demand to students and faculty at Northern Arizona University.

Hungry student, meet helpful robot. Picture this: Studying for finals, needing fuel but short on time, ordering some food with your phone, dropping a pin to show your location, tracking your delivery robot, then finally meeting your robot at the door, where you unlock the robot with your phone and grab your study snack. Then watch as the robot beep-bops down the street for more deliveries.

This scenario just became a reality at Northern Arizona University (NAU)’s Flagstaff campus. The robots are made by Starship, which has a partnership with Sodexo, and also introduced robots to George Mason University in January.

Like many of us, NAU Dining Director Ben Hartley didn’t know a whole lot about robots when he reached out to Sodexo to find out if his school might be a good candidate to try robot delivery. But he would quickly learn a lot about ‘bots.

“My knowledge base prior to learning about Starship was zero, approximately,” Hartley admits, saying that the game-changing juggernaut of food delivery to the industry hadn’t escaped his notice at that point, however. “I know of Uber Eats and things like that, but they use cars, not robots.” 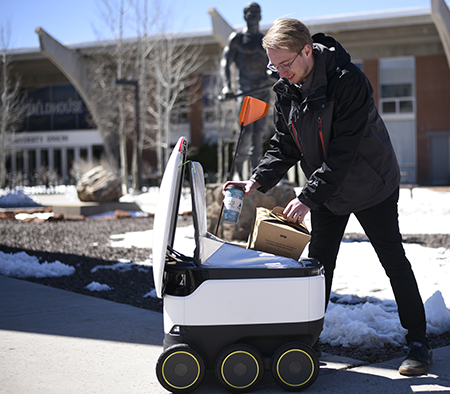 Based on the size of the school, history with innovation in dining, the operational team and other factors, Sodexo strategically determined that NAU was ready for robots. Also, NAU plays host to a big robotics competition each year.

The climate didn’t factor into it, though.

In fact, the day of the launch in late March, dozens of inches of snow fell on campus, “but the robots are pretty adept at weather,” Hartley says, “Although one did slip and fall.”

Navigation for the robots is handled in real time by a command center of humans in Starship’s headquarters. The robot puppet masters can tune into specific robots and help them if they get into a jam. At crosswalks or unfamiliar obstructions, robots can ask permission to cross if they’re not sure.

In addition, the fleet of robots “talk” to each other, so if one learns a challenging route, it can “teach” the other robots in real time. Crossing parking lots proved to be a bit of a problem on the first day, but “the robots are full of cameras and sensors and know to be cautious of cars,” Hartley says. When a robot encounters a person, it will politely say, “Pardon me.”

And the robots keep getting smarter. The trial earlier this year at George Mason led to refinements in menus and ordering that could be built upon for the NAU launch.
“Because it was so new, they [George Mason] didn’t launch a lot of modifiers to menu items, they started with a pretty slimmed-down menu to be sure the system was working, but we were able to start with six restaurants and didn’t limit the menus or modifications,” Hartley says, something he thinks “makes this much more attractive to students.”

NAU’s first day of robots was preceded with lots of training for staff, who at first may have been skeptical, but by the end of the day were warming up to their robotic co-workers. The training addressed how to keep both the online robot orders cranking while serving lines of people inside the dining areas. 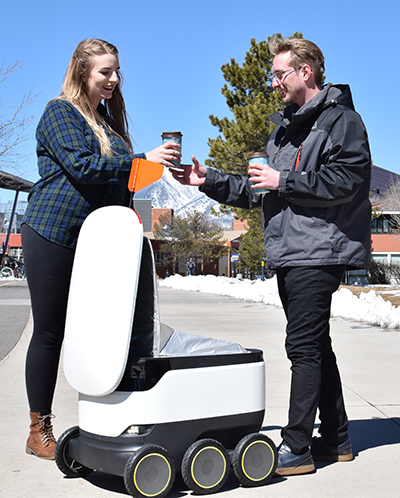 The day kicked off with a promotional free breakfast from campus retail concept Einstein Bros. Bagels. More than a thousand breakfast orders were successfully delivered, brining NAU into the robotic age. For regular use, each on-demand delivery costs $1.99 and works in conjunction with the student meal plan. Participating retailers include the national chain Star Ginger, as well as on-campus restaurants Cobrizo Mexican Grill, Turnip the Greens, G’s NY Style Deli and The Wedge Market and Pizza.

While the robot launch is a giant step for college dining, the robot launch also marks one of the first times sidewalk-delivery robots are operating in Arizona. The state is one of seven that have approved the operation of delivery robots. Rep. Kelly Townsend, R-Mesa, was a big proponent of this legislation, stating, “It’s great to see the hard work of many stakeholders come to fruition with the introduction of robots in Flagstaff. I look forward to this cutting-edge technology being implemented in other parts of the state as well.”

Starship SVP of Business Development Ryan Tuohy said in a statement that he thinks college campuses are the best place to test this new technology.

“We’ve been very pleased with how quickly Starship has been embraced on college campuses,” Tuohy said. “These campuses are hubs of innovation and activity, with both students and faculty needing convenient and flexible services. Our on-demand delivery is perfectly suited to this environment.”