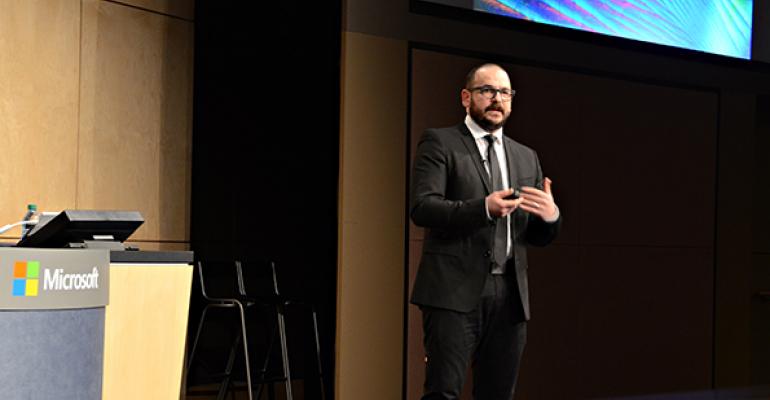 Solutions 3 gives directors from multiple industries a chance to get together and learn from each other.

Imagine a carrot soup that emphasizes the essence of what makes the ideal carrot. How such a soup is produced was just one of the highlights of the concluding session of the one-day Solutions 3 conference held January 30 in the Microsoft Conference Center in Redmond, Wash.

Solutions 3 itself is a collaborative effort sponsored by the Association for Healthcare Foodservice (AHF), Foodservice Consultants Society International (FCSI) and the Society for Hospitality & Foodservice Management (SHFM). The conference, with the theme “It’s All About the Food…or Is It?” is the fifth held by the partnership. More than 200 people attended the conference, where they not only enjoyed the sessions but also participated in a series of networking events highlighted by an after-conference reception in Microsoft’s recently remodeled Café 34. Attendees also got a chance to tour the company’s extensive onsite dining operations.

Migoya’s session capped things off with a bang as he described how the Modernist Cuisine chefs and scientists use admittedly pricey equipment and intricately developed techniques to squeeze the very last drop of quality out of food preparation.

For example, the carrot soup mentioned above used winter carrots (which are sweeter because sugar serves as an “antifreeze” in cold weather) shorn of their bitter cores and sprinkled with sugar and baking soda, then placed with butter in a pressure cooker. The baking soda, Migoya explained, carmelizes the sugars, serving as a substitute for sodium hydroxide (i.e., lye) that is used in many industrial processes to darken foods such as pretzels. Modernist Cuisine can’t use lye because its prep method doesn’t allow it to cook away as it does in its traditional industrial applications.

The result is a beautifully golden thick orange broth that contains the “soul of the carrot,” in Migoya’s words.

Other dishes Migoya described included a dairy-free (and therefore vegan) gelato, a perfectly cooked steak (using sous vide), an appetizer using standard frozen peas (which are centrifuged to within an inch of their lives in a contraption that spins at something like 10,000 RPM) and even a drink using absinthe (albeit a more benign form of the liquor that supposedly drove Vincent Van Gogh insane!).

Migoya’s presentation was preceded by MenuTrinfo’s Craig’s session, which focused on food allergies, a truly frightening topic that she punctuated with several horrific examples of procedures not followed or ignorance leading to tragedy. She told attendees that the incidence of such allergies was clearly growing but no one has definitively pinned down the reason, though there are several theories ranging from the increased use of GMOs and food additives to a growing cultural germophobia that may leave people too little exposed to microbes, leading to unintended consequences for the immune system.

Health Care Without Harm’s Clinton gave a very comprehensive view of the growing movement among healthcare institutions to implement practices that not only result in healthier foods being served to patients, staff and visitors but also address related issues like sustainability, labor practices, the environmental impact of food production and community responsibility. This emphasis on “environmental nutrition” requires institutions to consider the consequences of their purchase policiesfor the land, for water systems, for energy consumption and for the climate.

The three onsite chefs discussed various trends affecting their operations. Eurest’s Ivens-Brown focused on food trends. His list of the hottest food trends for 2015 included not only the usual suspects (locally sourced, gluten-free, etc.) but a few head-turners like biscuits, nuts and “mash-up dishes” which are a kind of fusion gone wild with chefs “mashing up” various ingredients, cooking methods and cultural traditions into something totally unique.

He also noted that one of the trending customer preferences was for “value,” which he defined not as low price so much as a good buy for the money in the eye of the purchaser. This still leaves room for generous price points as long as the consumer believes he gets his money’s worth.

Overlake’s Linamen focused on his institution’s determination to live up to the commitments made when the hospital signed the Healthy Food in Health Care pledge eight years ago. Some of his suggestions for those contemplating a similar course included starting small and slow with low-hanging fruit such as burgers that can be modified to be healthier with less consumer awareness.
Clenard’s talk on Performance Dining at Stanford ranged from how menus are modified (shifting proteins on the plate, for example, to emphasize more grains and vegetables), purchasing (to emphasize local producers) and education (with programs ranging from chef demos to a teaching kitchen where students actually learn cooking techniques).

Hines had led things off with a discussion of how she came to develop her restaurant concepts and focus on organic certification, which she described as a difficult, expensive and rigorous process, but one she feels uncompromisingly committed to. Ominously, she described the plight of the sustainable producers she deals with as tenuous not only from a financial sense but a demographic one as fewer young people seem to want to get into the farming life.