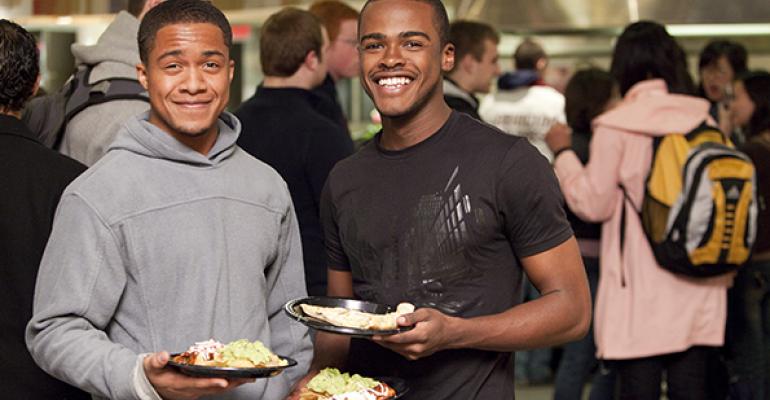 Look around at any university dining hall and the majority of students will be pecking away at their smartphones. At the University of Pennsylvania, however, some of those students will be sending instantaneous feedback about their dining experience to the school’s foodservice providers.

In fall 2014, Penn launched an innovative secret shopper program in which students are hired to complete anonymous online surveys about their experience dining on campus. There are 10 dining ambassadors hired a term and they represent a diversity of Penn experiences in regard to their school years, majors and extracurricular activities.

The goal is to increase meal plan retention among upperclassmen as only Penn freshmen are required to purchase meal plans. “We needed to get real-time feedback from a sample of our customers in a constructive way in order to take actionable steps,” says Director of Business Services Pam Lampitt.

Since its launch, the secret shopper surveys have revealed some critical areas for improvements. “We noticed some problematic patterns in certain dining locations such as a shortage of silverware, dishes or food,” Lampitt says. “They have also revealed the need for improvements on signage’s accuracy and effectiveness at communicating options like vegan or gluten-free.”

The secret shopper program is also key at discovering areas in which staff needs additional training. “If we see something consistently repeated on a report for a certain location such as lack of hairnets or employees on their cell phones, then I can approach the appropriate service provider and show them that this is an area that needs additional oversight,” Lampitt says.

More commonly, however, the student surveys offer validation for a job well done. “We may hear that a particular employee consistently engages with students say in the few minutes it takes to cook an omelet at an omelet station. In that case, we’re able to report back to the provider that staff interactions are going well.”

Lampitt says Penn’s foodservice providers look forward to the survey results as a guide to where to target their resources. “If I don’t get the report out fast enough, they come looking for it.”

As in any pilot program, the secret shopper concept had its kinks. “We had to repeatedly tweak the phrasing of surveys so that we were getting the kind of information that we needed,” says Barbara Lea-Kruger, Penn’s director of communications and external relations at business services. “And if you’re getting the same answer all the time, you may not need that question anymore.”

Another challenge was how to weigh the responses and how to best present them to university administration. “There’s so much data that it can derail how constructive the process is so I don’t just send the results to my manager, I send a briefing with them,” Lampitt says.

When the program first launched, the dining ambassadors were also required to write a set number of social media posts and attend special dining events. “It became clear, however, that the students who gave good feedback as secret shoppers were not necessarily good at social media or events. They were two different skill sets,” Lampitt says.

In January 2015, the school launched #PennCraves, a robust social media campaign that has gained notable momentum as a 21st century version of a comment card. The school also hired 10 additional students per term to keep up the social media buzz and cover dining’s special events.

Meanwhile across campus, table tents, campus signage and LCD screens encourage students to use the fun and flexible hashtag, which lends itself to endless fill-in-the-blank tweets, Facebook and Instagram posts such as #PennCraves bacon, #PennCraves variety or #PennCraves smoothies. The school landed on the word “crave” after working with outside consultants.

“Dining is about students and so we really want to be engaged in a conversation with them,” Lea-Kruger says. “We also saw value in Penn students talking about dining with other students.”

This online conversation also adds a cohesive feeling to eating on campus where foodservice provider Bon Appetite manages residential and retail dining while various other providers operate different cafés.
“There’s a challenge when you’re working with outside vendors to have a unified experience. We want all of our students to realize that dining is important to their Penn experience, and #PennCraves has given us that unified image,” Lea-Kruger says.

Engaging the students in a real-time feedback loop via social media and online surveys has already led to more meal plan sales. “Our target market for growth is in retaining sophomores and that has increased 15 percent since last year.”

“Students set their patterns as freshmen. We knew that if we were very focused on our freshmen, then sophomore to junior to senior retention would be better as well,” Lea-Kruger continues. “This is an opportunity to say to the students: ‘We’re listening to you, we’re making corrections, and we’re doing a good job.’”