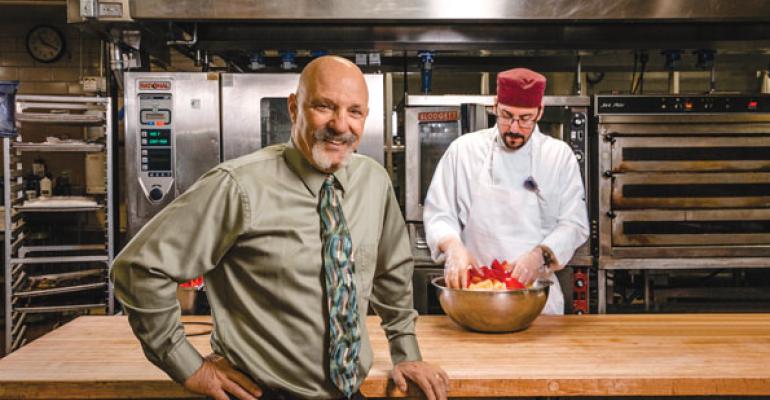 <p>Although Mark LoParco is a director of dining, he&rsquo;s plenty comfortable in a kitchen. The former chef of a seafood restaurant mans an omelet station once a month.</p>
News & Trends>Colleges & Universities

Mark LoParco has made his mark on the University of Montana’s dining services. Check that, Mark LoParco has built the University of Montana’s dining services. When the New York native arrived at the Missoula campus in 1992, foodservice operations reported to two separate departments. There was no consistency or collaboration, no standards or financial accountability.

LoParco was hired as the university’s first foodservices director and charged with bringing residential dining and student union catering into one cohesive unit. Within two years, the new dining department went from six-figure net losses to net gains every year, and more than $1 million to the bottom line on average each of the last five years.

Today, UM Dining is nationally recognized as one of the premier programs in the country, LoParco is closing out his term as president of NACUFS and he can now add 2014 IFMA Silver Plate Award winner to his resume.

“This isn’t just my award,” says LoParco, who’s also the executive director of the UM Food Service Management & Purchasing Consortium. “It really is to be shared by everyone here, at Syracuse and SUNY Cortland. You don’t do what it takes to win this award over a number of years without a lot of people helping and supporting you.”

LoParco, like so many, got his start in foodservice in high school, as a dishwasher, and eventually worked all the way up to a head chef position at a high-end seafood restaurant. When the growing responsibilities didn’t match the pay, he took a job in foodservice at SUNY Cortland and fulfilled a promise to his boss and got a two-year degree while there. After five years at Cortland, he spent a decade at Syracuse and added a bachelor’s degree from its new food system management program.

By then, he was hooked on the job and a drive into Rocky Mountain National Park in 1991 exposed him to bigger and more beautiful mountains than he was accustomed to in upstate New York. He was in Denver for the annual NACUFS event and credits the association for much of his growth, which is why he’s so involved today and why he encourages his staff to do the same with as many groups as possible.

A year after that road trip, he took the job at Montana and the rest is history. But his start there wasn’t easy: “First and foremost, we created policies and procedures, established financial performance requirements, established monthly financial accountability, synced salaries and then it was beginning to compile what’s necessary for real top notch foodservice,” LoParco says of his start at Montana. “We hired a chef, dietitian and brought together a great group of people.”

And then he really went to work elevating the program, especially in the area of sustainable business practices.

Launched in 2003, the UM Farm to College Program was one of the first collegiate local food purchasing programs in the country, and today the department purchases more than $800,000 from Montana producers, especially significant, LoParco notes, with the state’s limited growing season. His program was also the sixth state university in the country and first in the Pacific Northwest to sign the Real Food Campus Commitment, which sets the bar at 20% of all purchases from sustainable sources by 2020.

A working symbol of the school’s sustainable focus and LoParco’s passion sits outside the director’s office. The UM Dining Garden replaced an old and unattractive patio area of campus and now serves as a living laboratory for sustainable food production. It yields more than 3,000 pounds of food a year.

The school’s commitment to sustainability extends beyond that. Solar panels produce energy and power the greenhouse, all foodservice equipment purchased must be Energy Star rated and packaging must be ecofriendly. Carbon footprint is more than just lip service for UM Dining.
“That is germane to our mission,” LoParco says, “and not just from a food standpoint.”

All the impressive accolades and accomplishments aside, LoParco still gets most excited about making students smile. It’s why the former chef and self-proclaimed World Famous Omelet Guy still dons a costume and mans themed omelet stations every month.

“I get immense, immense satisfaction from my students and doing stuff that makes them smile means a lot to me,” he says. “We work hard; it’s fast paced with a lot of meetings, but that’s precious time for me to connect with students.”