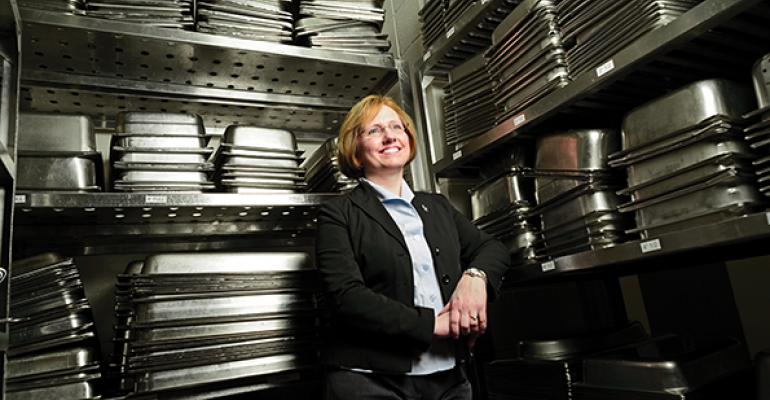 <p>BUILT FOR SUCCESS: Under Golledge&rsquo;s leadership, KU Dining has increased sales across the board, added services and become environmentally friendly.</p>
News & Trends>Colleges & Universities

Nona Golledge wasn’t supposed to stay at the University of Kansas (KU). In fact, she took the entry-level job right out of college under the assumption that it would be a stepping stone to somewhere else.

Twenty-seven years and six promotions later, that “stepping stone” has evolved into Golledge’s lifework. She’s helped to propel KU Dining forward—and she still has big plans for the years ahead.

For now, in addition to her accomplishments at KU and through professional organizations like NACUFS, she can also add 2015 Silver Plate Award winner to her resume.

“KU Dining has been my constant,” says Golledge, who has been director of dining services since 2006. “There are new opportunities every year that keep it interesting and exciting.”

When you talk with Golledge about some of her most significant achievements, it’s clear that she is not only a talented, smart and dynamic leader but also a big believer in the strength of her team. When she speaks of her endeavors, she rarely uses the word “I.” Instead, everything is “we.”

“KU Dining is made up of talented and dedicated people,” she says. “Together, we’ve transformed the operation into one of the leading college foodservice programs in the country.”
And she’s right. They have. But it’s been a lot of work.

It started in 2005, when Golledge spearheaded the merger of the school’s residential dining and retail operations. Over a few years’ span, she strategically got everyone on the same page, boosted morale, right-sized the operation and increased retail sales by 30 percent, catering sales by 15 percent and residential dining sales by 20 percent.

From there, under Golledge’s steady leadership, KU Dining evolved quickly and in clever, calculated ways.

As retail expanded, outlets were upgraded and renovated. Simultaneously, plans were made—and fulfilled—to update and renovate each of the school’s large residential operations. The latest project, which completely gutted and redesigned Daisy Hall (the school’s largest dining operation), was completed in a quick 78 days and for $5 million.

“We worked day and night to ensure that we hit our timeline,” Golledge says. “And while it was a real challenge at times, it was also a unique opportunity to do something new for our students.”
As part of the renovation, KU added a station concept called the KYou-Zone. It’s an allergy-friendly area that aids students with varied food allergies and intolerances as well as those with specialty food requirements, some of which include gluten-free, dairy-free, vegan and kosher.

Next up is the $18 million renovation of DeBruce Center, adding a state-of-the-art café with a churrasco grill, deli, Freshens smoothies full line and barbecue on the first floor. There will be a coffee bar on the second floor and a training table for men’s and women’s basketball as well as event space on the third floor.

She is also in the process of developing a minimart and a $10 million dining center as part of two new residence halls, which are slated to open in the coming year.

“The population in that part of campus will more than double with the new residence,” Golledge says. “We plan for the café to offer fresh, local and seasonal foods, plenty of vegan options and have a natural and organic feel.”

The new facility speaks to some of Golledge’s other accomplishments at KU, namely sustainability and local sourcing.

On her watch, the school has successfully implemented trayless dining, started a rooftop herb garden and switched to biodegradable disposables. They collect used cooking oil for conversion and have implemented a composting program that diverts over 600 tons of waste from landfills every year. Their recycling program is vast and extensive, too.

KU Dining purchases 29 percent of its products locally, works with nearby farmers on a year-round farm-to-cart program and has developed strategic partnerships with other local businesses, like Roasterie Inc., a specialty coffee producer, to further support the local economy.

The owner of the Roasterie Inc. gives back a percentage of what the school buys in the form of scholarships to students working in the coffee shops. He also invites baristas to the company’s headquarters in Kansas City for training.

“The Roasterie is just one of the partnerships we’ve established to give back to students,” says Golledge, who notes that as a result of these relationships, KU Dining grants $25,000 annually to its student employees.

Accolades and accomplishments aside, Golledge believes there is much to be done and learned, especially from those who work with her every day.

“I’m not the expert,” she says. “The leadership, the assistant directors, the staff members and students working the day-to-day parts of our operation—they are the experts. My role is to give them the autonomy and support to do what they do best. They know they can turn to me for advice. And they know that I may turn to them for advice, too.”