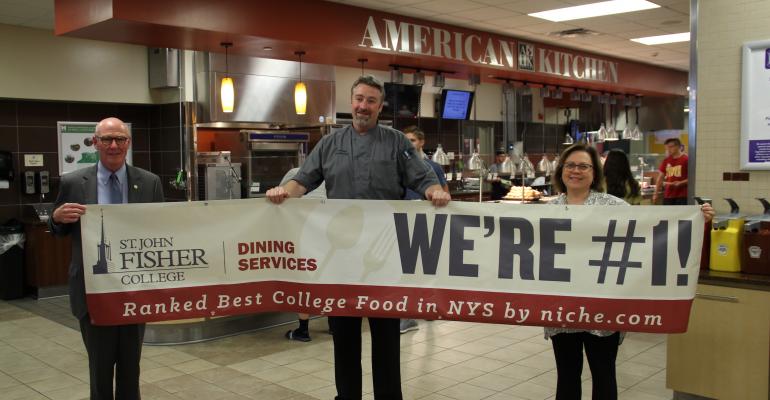 The customers love the food at St. John Fisher College (SJFC), or at least that’s the strong impression left by the dining program’s high ranking on the latest Best College Food list from niche.com, which is largely based on student input. The ranking also places the small private college located in Rochester first among colleges and universities in the state of New York.

The dining program at SJFC has been operated by Chartwells Higher Ed for over a dozen years and is currently overseen by Director of Dining Services Andrea Maccarone and Executive Chef Joel Kraft, who couldn’t be more delighted at the validation of their efforts, especially this year with all the challenges brought on by the COVID-19 pandemic, which included shutting down the campus last October after a brief startup.

“To me, our focus has always been great food and great service with a local focus, and we do it to the best of our abilities,” Maccarone suggests. “It sounds simple, but there’s a lot of work that we put behind that to reach and maintain our goal. I like to think Joel and I both inspire everyone to do their best. We don’t stay with the status quo. We always look to innovate, whether it’s a new menu concept, a new way of service or something unique that we can adapt here to go above and beyond for the students. Also, we’re all foodies here, with seasoned managers who all share a passion for all that we do.” 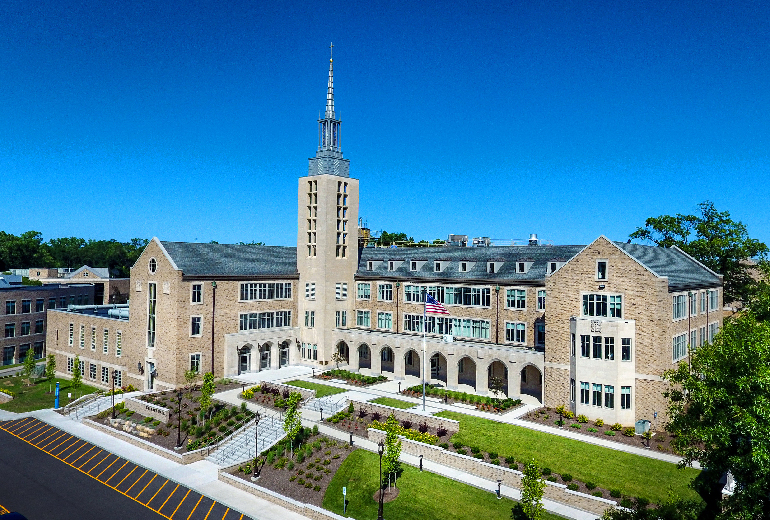 St. John Fisher College in Rochester, N.Y., has one of the top-rated campus dining programs in the country, and the top-rated one in the state as ranked by niche.com.

Related: Celebrating 16 Foodservices Heroes in the second year of the pandemic

“We’ve had a really good direction from St. John Fisher College to maintain local purchasing,” Kraft adds, “and that’s allowed us to work within the confines of our company in order to buy as much locally as we can, though that’s a changing target over the course of the year because of the weather.”

The program works with a locally owned and operated prime distributor, Palmer Food Service, as well as two local produce vendors, one of which buys only within the state. In addition, all dairy and baked goods, and “as many meats as we can find,” are purchased local, Kraft says, adding that the pandemic caused few supply disruptions among food purchases, but did pose problems with procuring some non-foods. 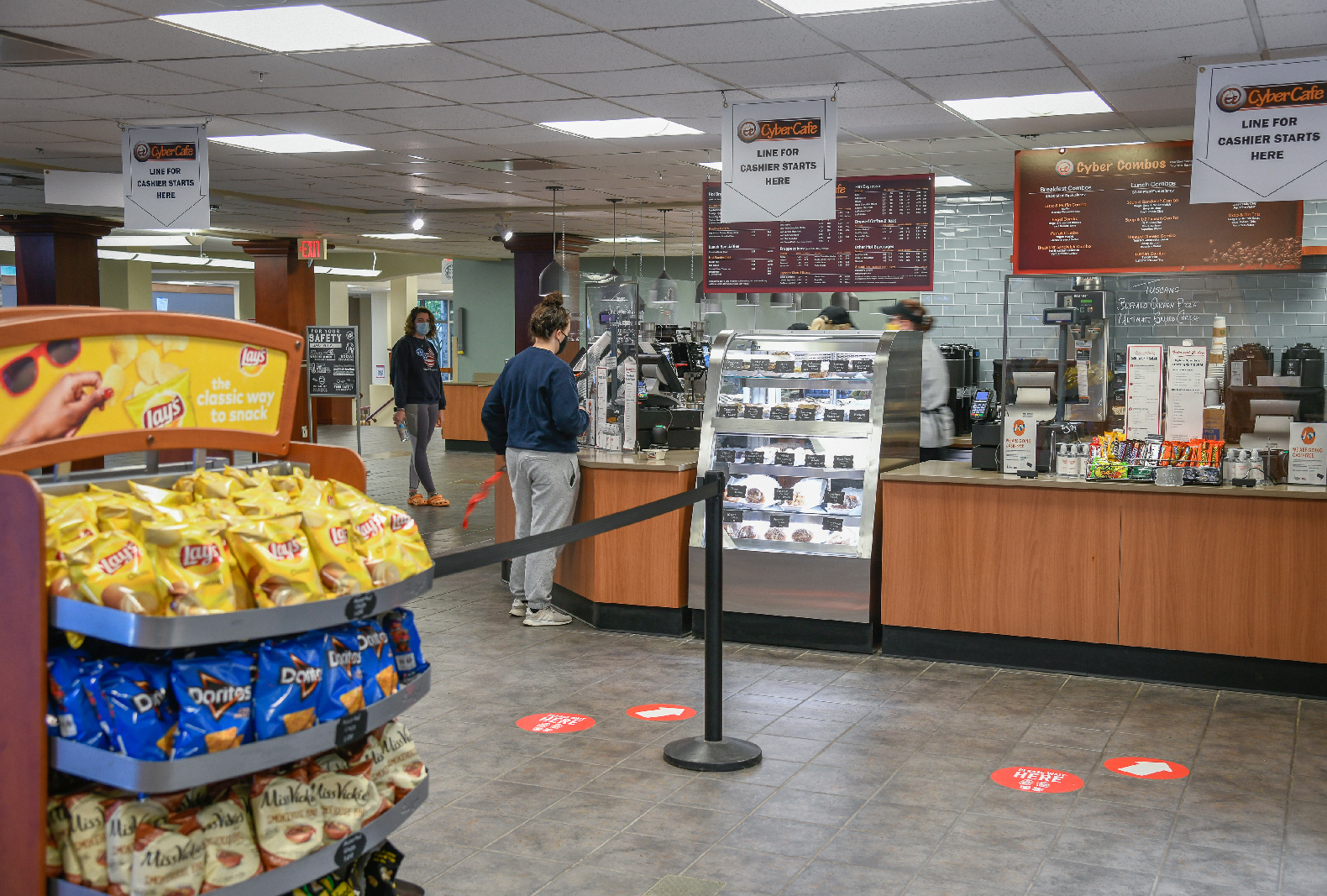 Some adjustments for spring

This spring, with the semester beginning a couple of weeks later than usual and going with no breaks, most resident students are back on campus—in fact, they are encouraged to do so, Maccarone says—though the majority of classes remain online. In all, about 1,100 students are on campus, down a bit from the average of around 1,450 in normal times.

And they continue to receive the same high-quality meal service they have been accustomed to, though with a few COVID-imposed modifications, such as no self-serve, limited dine-in and the modification of a couple of dining venues to better meet the needs of the current dining environment.

The latter includes the conversion of one former all-you-care-to-eat dining hall into a retail sub shop—“kind of like a Subway, but with better food” is the way Kraft describes it—and another into Chartwells’ Latin American cuisine themed SONO Grill concept, while the Cyber Café retail venue added a late-night menu service that had previously been at another location.

“We still offer just about everything we normally do with some modification at each station depending on layout and COVID modifications like plexiglass and no self-serve,” explains Kraft.

The venue has seen a drop in traffic from the some 1,200 a day during normal times to just over 600, with about half of those being takeout, which required some adjustment of portioning procedures and the use of disposable containers.

“Students take the containers back to their rooms to do some more studying and also to sit with other students who they may not otherwise be able to sit with [in the dining hall] because of our COVID seating requirements,” Maccarone offers.

Limited seating is also available in the other dining venues except the Pioche Café, which is strictly a grab-and-go/coffee location. 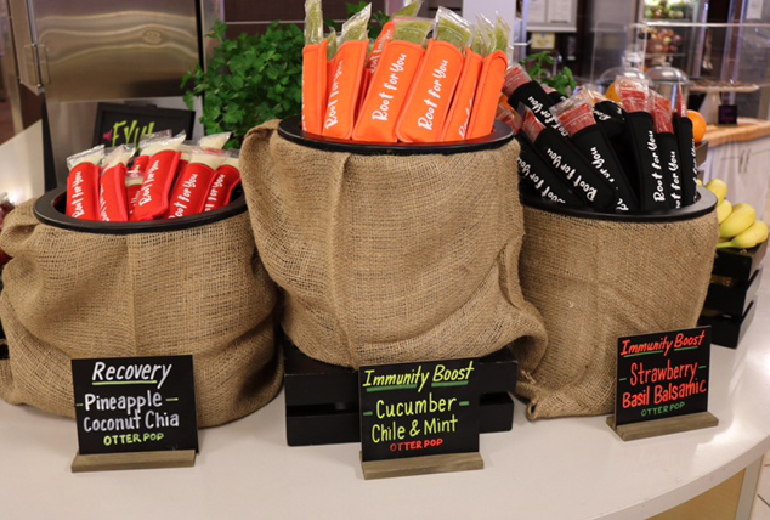 Though he has access to Chartwells’ national recipe database, Kraft says most menu items are developed in-house.

“We rely on our local talent to develop things like our scratch-made soups and sauces, with the soup, which we make with hand-cut vegetables rather than any frozen or convenience products, especially popular,” he adds.

Other favorites include a hand-breaded buttermilk ranch chicken that has been a signature offering since Chartwells took over, and “anything with Buffalo chicken,” laughs Maccarone. There is also a local favorite, the notorious “garbage plate”, described as “a platter of macaroni salad or baked beans, fried potatoes and some sort of meat (hamburger, hot dogs, chili, even fried fish).”

In Ward-Haffey, the most popular station may be the Mongolian Grill, where students can get a customized dish made with fresh vegetables, a choice of proteins and scratch-made sauces.

The Mongolian Grill did limit some choices to speed up service in the COVID-affected period, while the elimination of self-serve eliminated some choices like previously self-served ice creams and forced salad offerings to be condensed and packaged because the salad bar was closed. Also temporarily halted has been the regular offering of omelets, a perennially popular choice made with cage-free eggs.

Meanwhile, the special dinners that used to be offered a couple of times a month are still around, “but now it’s not with the splash we normally had,” Maccarone says. “For example, we used to have a big dessert display [open to students], but now it’s behind the plexiglass and because of space concerns they aren’t as elaborate. Also, instead of the chocolate fountain we had out there to dip fruit and other items in, we had to make adjustments.” 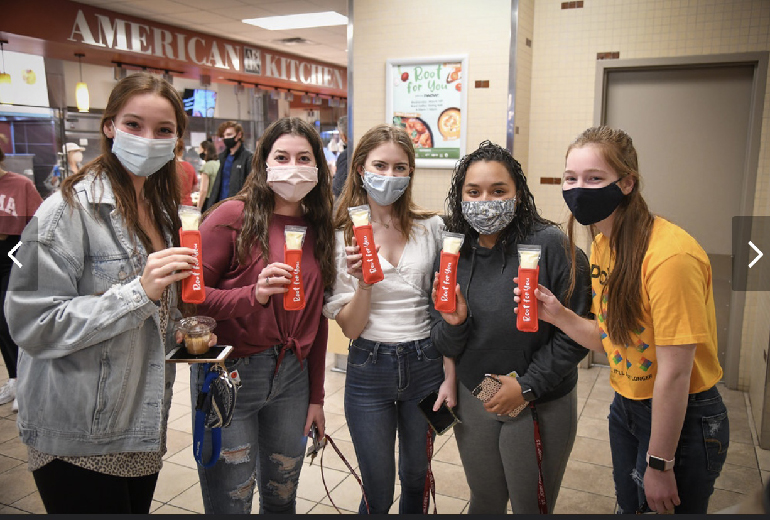 The Root for You vegan takeover of Ward-Haffey Dining Hall on March 10 substituted meatless alternatives for all the eatery’s offerings for one day.

One recent event that did come off very successfully was a plant-based “takeover” of Ward-Haffey on March 10 as part of Chartwells’ Root for You initiative to promote more meatless dishes as a sustainability measure, for which Kraft was involved in developing recipes.

“In Root for You, we reimagined all our offerings into a vegan version,” he explains. “It’s very challenging because you take things like mayonnaise for granted, but you can’t use them, so you have to find alternatives.”

Among the more popular offerings were a strawberry basil balsamic “Otter Pop,” a chia seed cucumber chili and “chicken wings” made of maitake mushrooms tossed in various vegan sauces.

Both students and dining staff miss the regular socialization that dining fostered during normal times, and to compensate, the staff try to make the rounds to tables to greet students dining in and making sure they feel welcome, Maccarone says, adding that if there is a bright side to the situation, it’s in relationships brought about by collaborating on solutions.

“I thought it might be worse,” she says, “but in some ways it actually helped us bond with the student government more. We have new people in those positions and we’ve really worked with them to be more aware of what we can do to make the dining experience better, what are we missing and what more can we do. There aren’t as many adults on campus now and I think we’re actually bonding with the students more.”