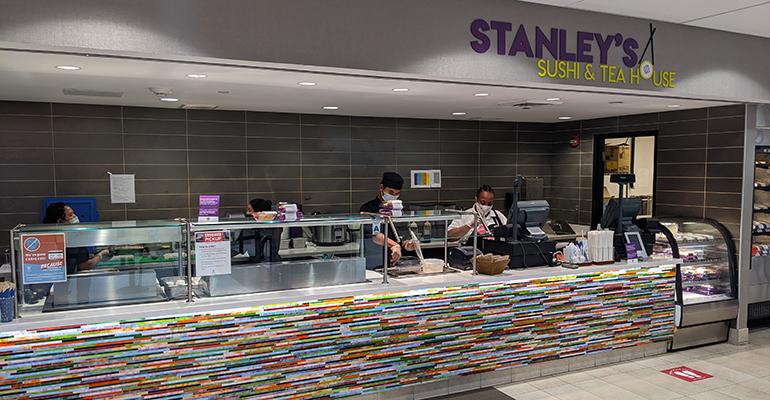 WUSL Dining Services
The Sushi & Tea House in Washington University in St. Louis’ engineering building opened this fall and has been drawing crowds from around campus.
News & Trends>Colleges & Universities

The new Stanley’s Sushi and Tea House opened this fall.

Campus dining programs have been challenged to maintain some semblance of sufficient business to be viable given the much-reduced campus population counts at many schools. That has not been a problem for at least one dining venue at Washington University in St. Louis (WUSL), where a new outlet called Stanley’s Sushi and Tea House has been doing robust business since it opened this fall—despite being located in an academic building that is seeing little use with many classes being online.

The stand-alone eatery, located in the school’s engineering building that is away from the campus residential areas, has had to add staff since its opening as student make their way over to indulge in the outlet’s menu of sushi, poke bowls and teas, says Andrew Watling, associate director of dining operations.

“As a dining program, we’re seeing about a third of the customers we usually do,” he says, but Stanley’s Sushi and Tea House has been an exception. WUSL normally has 5,000 to 6,000 students living on campus but that is currently down to about 2,600 as the school is offering a combination of remote and in-person classes.

The space occupied by Stanley’s was previously a nondescript snack bar-type location offering deli sandwiches, hot dogs and other standard fare, and it was not doing a lot of business even in pre-COVID days.

“It just wasn’t performing well and meeting needs of students or of the faculty and staff there,” Watling explains. “Meanwhile, we were getting a lot of feedback from students that they wanted sushi on campus and were going off campus to get it but wanted to be able to use meal points to get in here.” 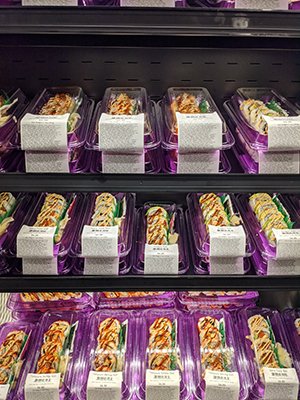 Photo: The WUSL Sushi & Tea House offers both made to order and grab-and-go sushi in a range of price points.

Given its underperformance, the venue in the engineering building was the logical place to make that happen and WUSL Dining conducted tastings, looked at options and got feedback, “especially from the engineering school because it is their space to make sure what we put in was what they were looking for,” he adds.

The team chose a company called FujiSan to provide the sushi. “They have the expertise to make quality products right onsite,” Watling offers. It is available in either pre-packaged grab-and-go format or made to order.

“In current environment, we’re pushing for most of the orders to come out premade for grab and go just to speed up service and avoid lines, but our vision for the future is a healthy mix of made to order and grab and go,” he says. There is also a mobile-order option used to make about half the current transactions.

The location was originally scheduled to open following spring break but the COVID crisis put things on hold until this fall. Hours are 10:30 a.m. to 3 p.m. weekdays offering a set menu that also includes poke bowls with Steelhead trout, tuna or shrimp, seaweed and calamari salads and a selection of boba teas along with sushi in various price ranges.

“We worked with FujiSan to pick a menu that had a good mix of food offerings and price points because we wanted to make sure students could get a meal without breaking the bank,” Watling says. “We feel we have a good mix of value and premium priced options.”

Students certainly seem to think so, based on traffic. In fact, early on, lines were getting so long that staff had to be added to speed things up and avoid dangerous crowding. In these days especially, it was a good problem to have.