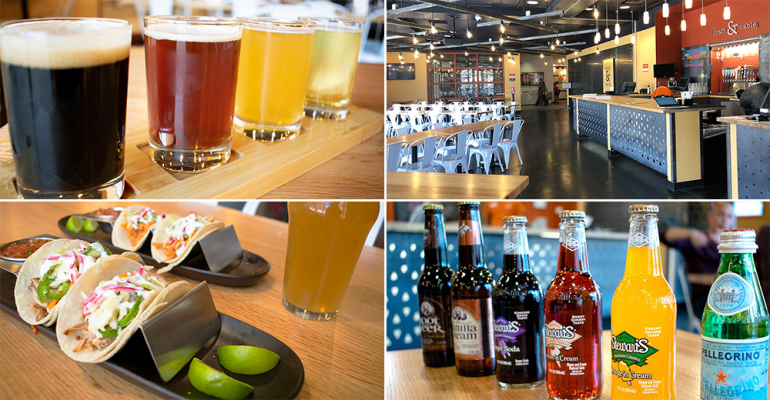 Albuquerque has a vibrant craft brewing culture, something that should be celebrated by the University of New Mexico (UNM), the state’s flagship university, which has its main campus in the city. At least that was the thinking of a group of students who had visited a beer taproom on another university’s campus and were inspired to bring the notion back to UNM.

They communicated their idea to university administrators, and thus began the project that would eventually become Draft & Table, a combination campus pub and sit-down restaurant located in UNM’s Student Union Building (SUB) in the center of the campus. Contributing to moving the project forward was the realization on the part of the UNM administration that the school could use a community gathering space as well as a sit-down alternative to the quick-serve concepts that otherwise characterized dining at the SUB.

Construction on the new venue began last June in a “dead space” in the SUB away from store fronts that held nothing more critical than some overflow seating. It was a relatively sterile space with very high ceilings and muted tones that gave it a bit of a cavernous feeling, but also ideal in terms of visibility, foot traffic and design potential.

On the downside, it was not a space that could support a full kitchen along with the refrigeration and tap system envisioned for the tap room concept, but that was solved with a highly efficient back-of-the-house production area and a carefully designed menu that combines indulgent items and sensible selections made with high-quality ingredients, with special consideration made for guests with dietary restrictions or preferences.

Draft & Table opened Oct. 10th with a ceremony that included UNM’s Associate Vice President Chris Vallejo and Interim Provost for Academic Affairs Richard Wood as well as Joe Fischioni, divisional president of Chartwells Higher Education, which manages dining services on the campus and provided half of the $650,000 investment that went into the project.