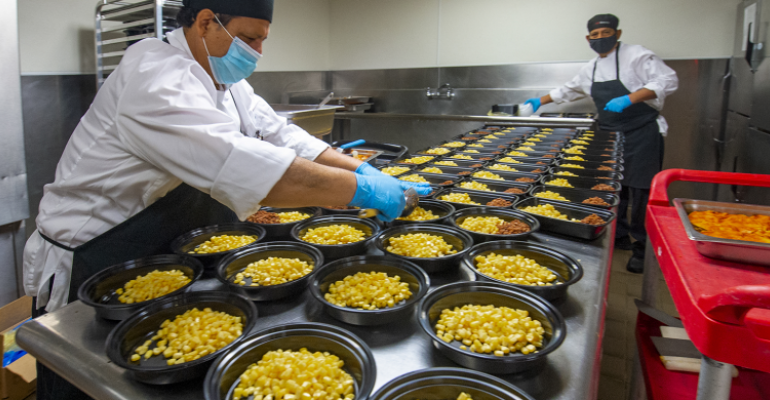 Takeout-only, food relief, third-party partnerships: How the University of Southern California is navigating the pandemic

As cases of coronavirus rose dramatically in the U.S. in March, the University Southern California (USC) in Los Angeles had more than 48,000 students enrolled and 12,000-plus people employed on campus. Like universities across the country, USC soon decided to move all classes online but with about a quarter of the student population international, a sizable number of students had to remain on campus.

“There were a lot of students who ended up staying with us—about 4,000,” says Kris Klinger, assistant vice president of USC Hospitality and USC Hotel. “These weren’t just international students but those that came from the foster system, for instance.”

Out of the three dining halls, USC Hospitality kept one open to serve these students three meals a day. Students had to maintain social distancing while in line with defined one-way traffic of entering and exiting the venue. At first, students were able to maintain social distancing at tables indoors but eventually, inside dining was stopped and orders were takeout-only.

The dramatic reduction in on-campus dining permitted the university to participate in other foodservice initiatives. Klinger says some surplus goods that could not be used on site were donated to area shelters. USC kitchens and staff were also used to prepare hot meals for the Senior Meal Emergency Response Program, which provided food security and jobs during the COVID-19 response. “Since mid-April, we’ve partnered with the City of Los Angeles and our union to cook 8,000 meals a week for homebound senior citizens,” explains Klinger. 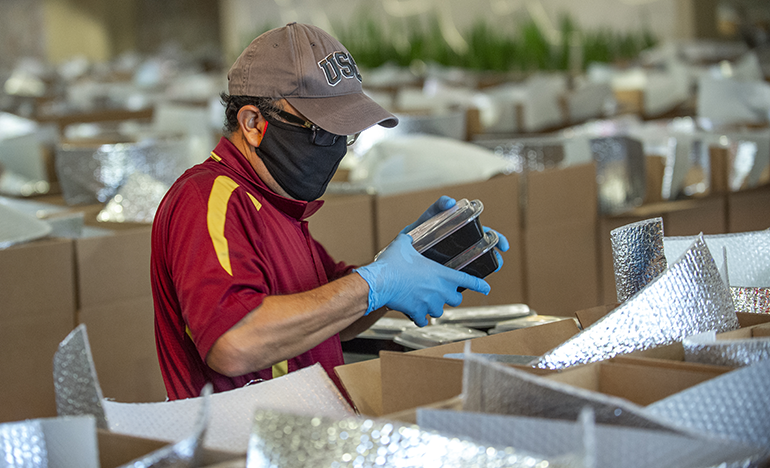 USC continued to produce meals for the Senior Meal Emergency Response Program through the second week of July while providing limited dining options on campus. In the summer, only a fraction of students and staff remained on campus so USC Hospitality began partnering with GrubHub to facilitate takeout orders. They also stopped offering breakfast service and instead, gave students the option of getting a bagged breakfast for the following morning with their dinner orders.

In the fall, USC will likely conduct the majority of classes online with the exception of labs and other classes that have to be in person. “At this point, we’re considering keeping the GrubHub partnership as well as utilizing specific retail venues that are either in the center of campus and maybe one or two in the academic buildings that support the students that we'll know that we know will be on campus,” says Klinger.

Until recently, USC Hospitality offered students on the meal plan an unlimited option. “Now the focus is on getting them a meal and keeping them safe so we’ve moved to a declining balance system instead,” says Klinger. “The unlimited option was such a great value for the students because they didn't have to worry about burning a swipe. But now, we need to limit how many are congregating indoors.”

Fall menus will be limited as well with an emphasis on what ingredients can be cross-utilized as well as produced in a safe environment. “We also want to try to employ as many people as possible in the fall because we had to furlough almost 700 people recently,” says Klinger. 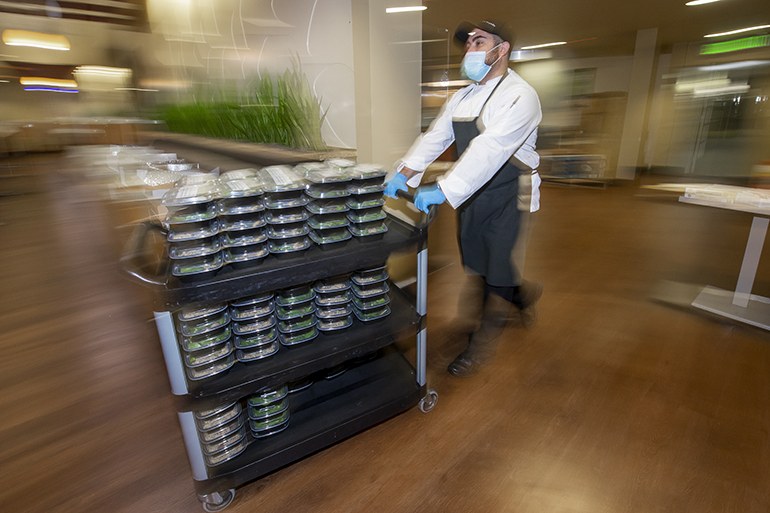 Staffing has been a major challenge during the pandemic, one he’s able to discuss during his regular phone calls with colleagues in other institutions across the U.S. “It’s been difficult to bring people back when unemployment pay has been so high,” he says. “Honestly, however, there are some people who really prefer to be back at work instead of at home.”

Another challenge discussed by those in charge of dining at colleges and universities nationwide is how to manage students’ tendency to socialize. “We considered opening dining outdoors on campus but that would entail a certain oversight to make sure students don’t congregate,” he says. “Students are going to do what they want to do. Freshman, in particular, want that college experience—the freedom to socialize.”

Calls with his counterparts in other states have been a great resource, says Klinger. He also says navigating these unprecedented challenges requires a certain mindset. “I tell my teams that we all have to really think outside the box,” he says. “We have to acknowledge we’ve never been in this situation before so the ways we’ve always done things may not work anymore.”

Lastly, Klinger advises that while there is a lot of concern and fear fueling how operations move forward during a pandemic, you still have to approach problems practically. “One of my teams was getting ready to install plexiglass social distancing dividers in venues that we weren't even planning on opening in the fall,” he says. “Ultimately, we want to make sure everyone is safe and healthy, but we still have to make wise and prudent business decisions. Otherwise everything that you do is not going to last because you're going to go out of business.”