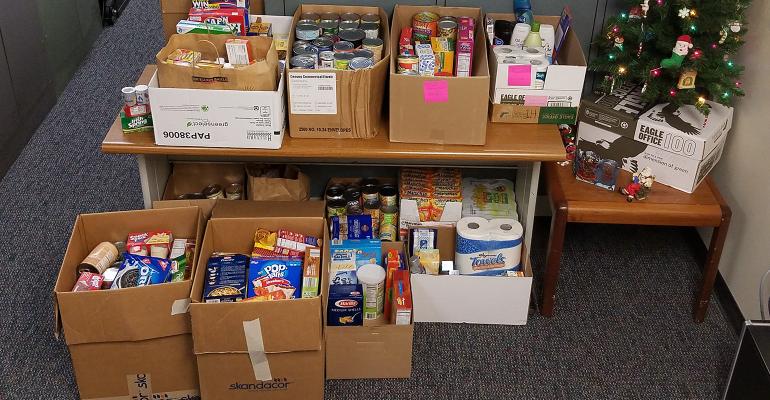 Hunger plagues colleges and universities across the country, especially the community colleges and state schools most Americans attend. In fact, a 2017 study published by the American Educational Research Association found that an estimated half of all college students struggle with food insecurity, even at elite flagship universities. The study also found that food insecurity is strongly linked to lower graduation rates.

“It’s difficult to focus on class, or to take a test if you’re worried about having enough to eat,” says Anne Kress, president of The State University of New York’s (SUNY) Monroe Community College (MCC) in Rochester N.Y. “SUNY is taking action. We are addressing the fact that there are students who aren’t completing their degrees or earning their certificates—not for lack of motivation—but for lack of having their basic needs met.” “Students are the future of our state,” says Kress. “They are our teachers, doctors, inventors and engineers. They will shape New York. And they have a right to not be hungry.”

The task force, which will have its first meeting at the end of March, is being coordinated by Associate Provost of Student Affairs Dr. John L. Graham and will include representatives from SUNY’s 64 campuses as well as the following organizations: Food Bank Association of New York State, University Faculty Senate, auxiliary service corporations, Regional Food Bank of Northeastern New York, City Harvest, SUNY Student Assembly and SUNY Board of Trustees Student Life Committee.

“There will be an immense amount of talent at the table,” says Kres, who hopes the task force will first identify food security best practices and then establish subcommittees to implement ideas. “We recognize that there is a lot going on on each SUNY campus, but we can do more together and that’s the power of the task force.”

SUNY is likely to have a big impact as it is the state’s largest system of higher education.

“Currently, 70 percent of our campuses have food pantries,” says Kress. “That means 30% don’t. But there is much to improve at many of the ones that are established. The task force is going to first focus on establishing food pantries on all campuses within six months. We will then work to sustain them system wide.”

In addition to running a successful food pantry, MCC has a handful of other experiences and programs to bring to the task force’s table.

In the fall 2016, MCC participated in a food and housing insecurities survey among community colleges nationwide. The findings provided an alarming wake-up call, says Kress. “Fifty-one percent of MCC student respondents admitted they cut meal size or skipped a meal altogether because they didn’t have enough money for food,” she says, adding that 63 percent said they couldn’t afford to eat balanced meals.

Those findings led to the establishment of MCC’s “Doing What Is Good and Healthy Together” (DWIGHT) program. DWIGHT is a persona taken on by a mobile food wagon that travels the Brighton and Downtown campuses and the physical food pantries located on each. The food items in the wagon are tagged with the slogan, “Grab a Bite... Need More for Tonight?” and provide the food pantries’ location where students can visit to pick up additional food.

Another initiative is MCC’s Food for Fines program, where students with outstanding parking fines are offered the opportunity to satisfy those obligations by contributing canned goods for the college’s food pantry (see photo at top). “This past year, we collected 1,300 items and the year before we collected 1,400 items,” says Kress.

MCC also offers a microgrant program—dubbed Dreamkeepers—that helps students stay in college when they are faced with an unforeseen financial emergency.

“Through Dreemkeepers, we’ve identified students who are homeless, who are in domestic abuse situations and who have no means to buy food,” says Kress. “If they come to us, we can provide assistance by giving them a small grant, usually between $200 and $300, to address their immediate financial emergency.”

MCC does not doll out cash to anyone who says they need help, though. To be eligible for funds a student must have an emergency need supported by documentation, have exhausted all other financial possibilities (including loan options), be a current matriculated student at MCC, have earned at least a 2.00 GPA at MCC for continuing students, have initially been registered for a minimum of 12 credit hours and be in good academic standing. If a student meets the criteria, MCC will issue him or her a retail specific gift card or a check addressed to a service provider.

As a result of Dreamkeepers, students who have accessed a grant persist through the semester and into the next at a rate of 80 percent.

“We’ve identified what a significant role meeting basic needs means to a student’s success,” says Kress. “This task force will address an untold story in colleges, especially community colleges where many of our students are living on the margin. I can’t say enough about how thrilled I am about Governor Cuomo’s “No Student Go Hungry” initiative. His goal is laudable and comes at a perfect time when we can have access to real data about this topic and can see a ground swell not only across the country, but especially in New York.”