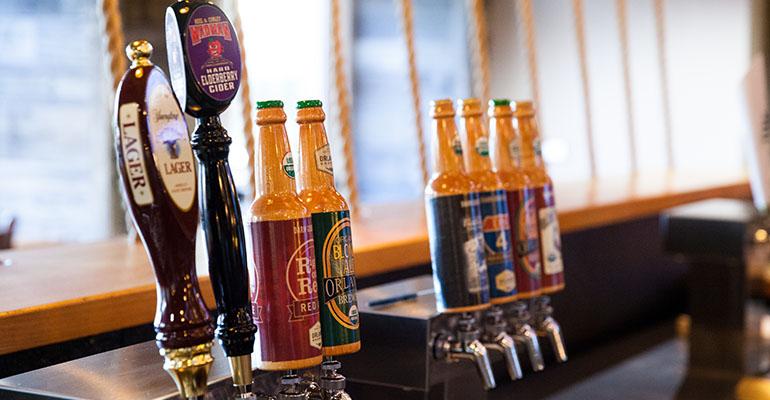 Teachers and students now bond over beers at Rollins College

The new Dave’s Boathouse offers a selection of local beers and wine to go with its menu.

Back in the 1970s and ’80s Rollins College students, and even their professors, enjoyed a pint at the Tar Pit in the student center. But when the state of Florida pushed the legal drinking age to 21, the college shut down the beer-serving space. As of November, the school is once again serving beer, as well as wine and food, at a new pub called Dave’s Boathouse, thanks, in part, to some persistent students.

“Everything started with the students’ interest three years ago,” says Hernan Gustavo Vasconez, the general manager of Sodexo Campus Services at Rollins College. “They wanted to have a beer- and wine-option on campus.”

The student government proposed a community space that happened to serve alcohol, not a bar for hard drinking, they stressed. Vasconez and his team began to look into the feasibility of a pub on campus. The school already had six other dining options, including a traditional cafeteria and three cafés. (Rollins College has been rated one of the best colleges in America for food by the culinary website The Daily Meal.)

Vasconez and his team first did a thorough analysis of the campus. They found that when the school year started about 34 percent of students were over 21, but by January that number jumped to 43 percent. That number didn’t include teachers, faculty and staff or members of the community. The outside community in Winter Park, Fla., where Rollins is based, has been dining at the campus’s food establishments for years “especially brunch time on Sundays is very popular,” Vasconez says.

Once the liquor license was secure, Vasconez decided to focus the beer service on one local brewery, Orlando Brewery. He liked that it was one of the few organic breweries in the country. “That drove us to choose them as the purveyor. Plus the beer’s pretty good too," he says, laughing. (The brewery's tagline is Darn Good Beer.)

Vasconez also took a modern approach to wine. He took a group of students, faculty and staff to Quantum Leap Winery, a local winery, to figure out what might sell best. They ultimately went with a four wines that Vasconez describes as “refreshing.” The Boathouse serves wine on tap; a trend Vasconez says is popular among students and the local community.

Students were also consulted when Vasconez and his team selected the meat blend for the Boathouse burger, the pub’s signature dish. A chuck brisket and skirt steak blend won out. Joining the burger on the menu are chicken wings, beer-steamed Cape Canaveral freshwater clams, and other appetizers, entrées and desserts. There are options for vegan, vegetarian and gluten-free diets as well, such as the quinoa and kale skillet.

Prices are the same, on average, as other options on campus with some more expensive items like clams and salmon.

Students order menu items upon entering the Boathouse. Food items can be purchased with a Rollins Card from students' declining balance meal plans. Alcohol can be purchased with cash or the same card using a self-funded, declining balance account the school calls Tar Buc$. Using the point of sale system and the Rollins Cards, Boathouse employees can identify if a student is under 21.

Students are handed any alcohol purchases at the point of sale. If students are ordering food, they pay and receive a corresponding number that they display at their tables. Runners then deliver food. The system helps ensure that students under 21 do not receive alcohol. “We have to do it that way,” Vasconez says. “It’s hard to have table service when you’re running something like that.”

The space was financed by a group effort and cost about $2 million. The money came from the dining department, the school and donations from alumni and parents. Perhaps one of the most generous donations was from the design firm Nautical Furnishings. A former student's parents own the firm, which has worked on the interiors for many restaurants, including Red Lobster.

Dave’s Boathouse is designed with reclaimed wood paneling and furniture and seafaring details like portholes for windows thanks to Nautical Furnishing. “We were so lucky,” Vasconez says. The maritime theme was perfect for the school, which sits next to Lake Virginia, an area known for its water sports.

Dave’s Boathouse opened officially Nov. 12 and has served approximately 700 people every day since. The pub opens at 11 a.m. and closes at 2 a.m.

Televised events like Ultimate Fighting Champion fights and the Democratic debate have proved to be quite popular, and these events are a great way to gather students, faculty and staff, Vasconez adds.