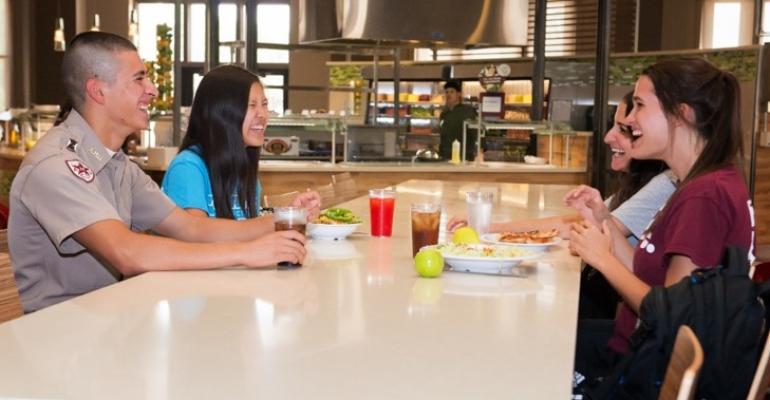 The sustainability bar just got higher, thanks to Sbisa Dining Hall

Texas A&M's football team might be known for its signature maroon-and-white uniforms. But when it comes to campus dining facilities, the College Station, Texas university is going green.

Texas A&M's Sbisa Dining Hall is currently the only dining hall in Texas to become a three-star Certified Green Restaurant. The university achieved the designation in June 2022 through a partnership with the Green Restaurant Association, an organization that certifies restaurants on sustainable dining standards designed to measure a restaurant's environmental accomplishments.

Related: FM On Demand with Tara Fitzpatrick: Midwestern roots with U of Dubuque’s Director Andy Mettert

"Here at Sbisa, we see 2,000 to 3,000 transactions per dining period. That's huge. Because of that volume, we want to make sure that we're putting our best foot forward," says Texas A&M District Marketing Director Brittany Coker. Sustainability has become more important than ever to students, too. "Being aware is really important to them. They want to know more about what they're consuming and eating," Coker adds.

In order to qualify for Green Restaurant status, Sbisa was required to earn certification points in multiple sustainability categories, including energy, waste, disposables, use of chemicals, food, and sustainable building. The school implemented 39 individual steps within these areas to earn Sbisa's 3-star rating. (The highest rating is 4 stars.)

That didn't mean that Sbisa started from scratch, though. "We mostly had to look at what we were already contributing to those categories. What were we already achieving in terms of sustainable operations and practices?" says Aggie Dining Sustainability Supervisor Yadira Hernandez.

As it turned out, the answer was: A lot. Already in place was Sbisa's full-scale recycling program, which included diverting used cooking grease to the cooking oil filtration services  FiltaFry and Restaurant Technologies, which upcycles the oil into biodiesel. All back-of-house waste, including cardboard, plastic, aluminum, glass, and paper was also being recycled.

The dining hall also had an existing, full-scale composting program that collects both pre- and post-consumer food waste. Vegan and vegetarian dining options had long been a mainstay on Sbisa's menus. "Even the smallest practices we were already doing earned us points," Hernandez says. "We're trayless, lidless, and strawless. We use reusable cups, plates, and utensils; we no longer purchase styrofoam products. We have plenty of Energy Star appliances in the kitchen, so they were already energy efficient."

With those insights gathered, it was simply a matter of figuring out where Sbisa could take its sustainability efforts further.  One area of focus was water conservation. "We found out that our pre-rinse sprayers could have been better," Hernandez says. So the old, less efficient ones were replaced with new, low-flow models. "It reduced overall demand and how much water we're using each time we pre-rinse," she says.

Senior Executive Chef George Charbel also worked to increase the percentage of plant-forward meals. "We go all the way from a basic black bean burger to intricate, full stations with plant-forward takeovers. The whole station will be nothing but plant-forward options, like a Beyond Meat type of thing," says Coker, who estimates that, since getting certified Sbisa's plant-forward menus have increased by around 20%.

There's also been an effort to bump up Sbisa's use of local, in-season produce. "We have a strong partnership with local vendors and vendors across Texas and try to keep them as present as possible when it comes to purchasing," Hernandez says.

Considering the number of sustainable practices that were already in place, implementation didn't pose much of a challenge for Sbisa. The biggets hurdle, instead, was collecting the initial data to show how many sustainability benchmarks Sbisa was already meeting. That involved communication across multiple university departments, including dining services, operations, and marketing. "We're not just a sole, standalone restaurant. We're occupying a space where the facilities department knows the square footage, the electrical department had information on lighting. So many things were overseen by other [non-dining] departments, so it was an extensive, collaborative effort," Hernandez said. "The scale of the project was a lot to tackle."

The collaborative nature of the certification process meant that deadlines had to be revised several times. In the end, it took about six months for Sbisa to achieve its certification. Now that it's done, Hernandez and her team are looking towards certifying Texas A&M's other dining spaces, one by one. The university is currently in the process of auditing sustainability measures in the Commons Dining Hall; afterwards, it'll move on to certifying Duncan Dining Hall.