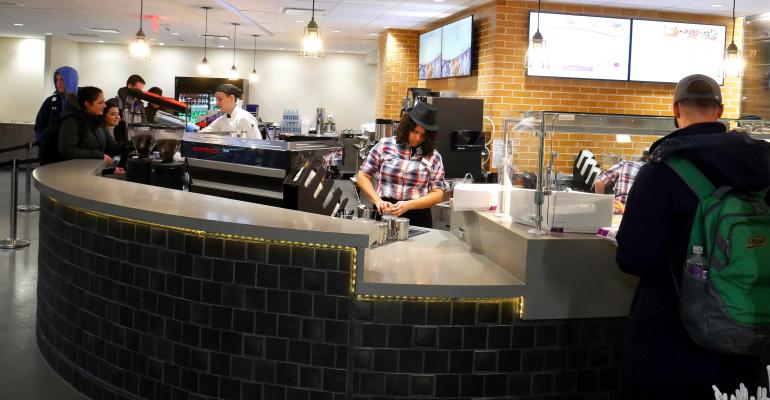 The largest construction project in the history of the University of Notre Dame was completed in mid-January of this year with the opening of the Duncan Student Center, the last piece of the school’s $400 million Campus Crossroads initiative. Campus Crossroads is designed to integrate the iconic Notre Dame Stadium with the rest of the South Bend, Ind., campus via three buildings adjacent and attached to three sides of the stadium.

Totaling some 800,000 square feet, they include two academic buildings: O’Neill Hall housing the music department and the Sacred Music at Notre Dame program, and Corbett Family Hall housing the anthropology and psychology departments, as well as state-of-the-art media facilities. The three new dining venues are located on the first floor of the spectacular new Duncan Student Center, which is attached to the school’s iconic football stadium.

The latter include Star Ginger, the Mai Pham-designed Southeast Asian concept with multiple locations around the country; Modern Market, an emerging farm-to-table-based concept that menus artisan foods made with “hyper-clean” ingredients and is co-owned by a Notre Dame graduate; and Haggerty Café, which is centered around direct trade-sourced coffee drinks from Chicago-based Intelligentsia Coffee & Tea, along with housemade gelato and pastries, and Freshens branded crepes and smoothies.

The concepts were chosen with an eye to complementing existing dining options on campus, says Chris Abayasinghe, senior director of campus dining.

“We listened to the students, studied the trends and identified niche areas in our restaurant portfolio,” he says. “All three outlets are unique yet complement each other, following nutritional directives such as Menus of Change and plant-forward meals and authentic ethnic cuisines.”

The Duncan Center is one of two student centers now operating on the Notre Dame campus, along with the longstanding LaFortune Student Center, which remains open. The two are designed to complement each other and give students choices on where to spend their time when not in class.

In the early going, the project seems to be succeeding, at least judging by dining traffic. Abayasinghe says the three Duncan Center concepts were averaging some 2,300 transactions combined a day, with some days hitting 3,000. The lunchtime daypart has seen the bulk of that, especially between 11 a.m. and 1 p.m., though dinner has seen a steady flow without the volume peaks of the lunch period. The hours of the three concepts vary to take advantage of the relative daypart popularity of their menus.

Nor have the new venues cannibalized sales from other campus dining concepts, with a 19-percent sales increase across campus dining outlets overall in the first couple of weeks after the Duncan Center opened.

“We are confident that future exposure of these new brands to external guests will have a significant impact on sales,” Abayasinghe offers.

As the Duncan Center is connected to the stadium, the natural assumption is that it will play some role on game days starting in the fall, but that has yet to be determined, Abayasighe stresses.

“We anticipate launching a catering program in April with some of the operations,” he says, [and] we are currently in discussions with game day operations and student activities to identify what the role of the restaurants would be during stadium events.”