This beautiful row of Ipoh trees almost met with the buzz saw during construction, but thankfully the architecture team intervened. “They were going to take it all down so we could build right up to the sidewalk,” Imirzian says. “But they are beautiful, established trees. We used them as a resource instead to provide shade and a connection to the campus overall.”

What’s more, the trees began to take root in the project. “It became the main driving force for how we organized the space,” Imirzian says. A tropical relative of the fig tree, the Ipohs now create a woodsy shaded path that’s traveled by students on their way to the performing and visual arts buildings to the west.

The important role of a landscape architect
Bill Timmerman

Since the environment influenced the design of the Mt. San Antonio College Food Service Building in a major way, working with a landscape architect was vital, Imirzian says. “It not just about where the building starts and stops; it’s about the surrounding area. You can experience this building without even going inside.”

Varying levels of ground and a tight, densely built surrounding space to work in made planning and construction complex. However, that complexity gave way to a zenlike simplicity in the final result.

“That was the key to this: How do we make it open and part of the landscape and allow movement as you’re passing by outside as well as inside when you’re getting your food?” Imirzian says.

Covered exterior terraces offer more seating in California’s perpetual balmy climate. So accessibility was key for the design team. Glazed vertical lift doors on two sides allow for a connection to nature that feels seamless. “It’s become a very big magnet for the students; you want to sit out there,” Imirzian says. “It makes the dining room look like it’s a continuation of the servery and the terrace becomes the key part of the dining area so it’s cost-effective. We didn’t have the budget to build a huge dining room.”

California sunshine inside, too
Bill Timmerman

Sun streaming into a dining room isn’t especially unusual. But it is for an onsite kitchen. The large central production kitchen, which also serves two other locations on campus and the catering operation, gets the majority of its light from the sun. No dreary dungeon-like kitchen here! “It’s very efficient to have daylight coming in,” Imirzian says, emphasizing a mindful design process. “You just have to think about it ahead of time.”

Imirzian predicts that the food hall model with many concepts will continue for college dining architecture, and it’ll get speedier and more techy. “I think it’s definitely here to stay, along with the way we can deliver food and the speed with which transactions can take place and having the ability to send in your order ahead of time.”

Design for the times
Bill Timmerman

“The servery has the stations that are reflecting current trends, like big pizza ovens and feature stations that are visible to everyone who comes in,” Imirzian says. Working with foodservice consulting group Webb Design, Sodexo and the college, the architects studied the numbers of peak rush times, “making sure we had enough space for those lines to move, but not take away from the dining area because we had limited space and a limited budget,” Imirzian says. The use of energy-efficient equipment and recycled, low-maintenance construction materials adds to the sustainability factor in the building. 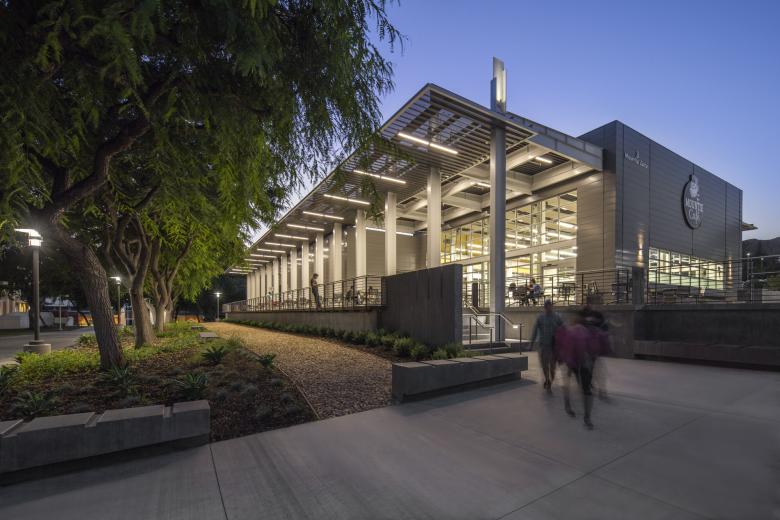