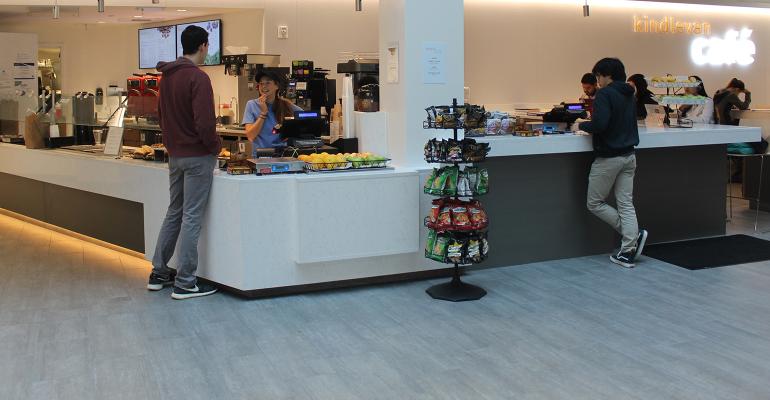 In the heart of the new science and engineering complex (SEC) at Tufts University (Medford, Mass.), the Kindlevan Café is pulsing with activity.

“We are very fortunate to land in this new space at the center of where all these buildings now intersect,” says Patti Klos, director of dining and business services at Tufts. “It’s a prime location for students, faculty and staff either going to class, to work or even just cutting through.”

The café sits at the center of the SEC, which links 80,000 new square feet with 26,000 renovated square feet in Robinson Hall, as well as the existing space of Anderson Hall. The three buildings have created what is essentially a dedicated corridor for students, faculty and researchers in science and engineering disciplines. The eatery is next to a sun-filled atrium and offers a wide selection of breakfast sandwiches, panini and sushi, seasonal salads and soups, grab-and-go snacks and desserts (above), as well as coffee, tea, and fresh-pressed juices and smoothies. It’s open on weekdays from 8 a.m. until 7 p.m., and new specials are being introduced frequently.

“We’ve found that we’re more successful when we open an operation with a core menu and introduce new items right up through finals,” says Klos, adding that dining services plans to build out Kindlevan’s breakfast program in just this way. “We’re make a better impression on our customers—one that says we’re always changing and evolving with their tastes and preferences.”

Before Kindlevan opened, the only nearby dining option was a retail coffee shop called Brown & Brew. It was born in the ’90s when the television show “Friends” was all the rage. At 20 years old, it needed an overhaul. So when the opportunity was presented to open an entirely new café in a very high-trafficked space, dining services made the bittersweet decision to close Brown & Brew.

“We needed a bigger footprint that could better support the demands of this new complex,” says Klos. “Most of the staff from Brown & Brew moved to the new café as well.”

Kindlevan Café was funded by a gift from Jeff Kindler and Sharon Sullivan, husband and wife alumni who met in Copenhagen on a semester abroad program, and saw their daughter graduate from Tufts in 2011. “Kindlevan” is a combination of their surnames.

So far, the new café is doing very well.

“We currently serve an average of 520 customers daily, which represents a 19.5 percent increase over the location it replaced,” says Klos. “We’re also seeing a 7 percent increase—or a 20-cents increase to $5.75—in the average check.”

The café does not have a full kitchen, but that was intentional. Instead, nearly all of the menu items are prepared in Tufts’ central culinary kitchen and finished at the point of service.

“The back of house was designed for finishing and retherming as well as to support catered events in the atrium,” says Klos, adding that the café takes design cues from the four-story, glass-sheathed research wing of the SEC. “The service areas are modern and sleek and were made to be multipurpose. For example, the area where the juices and smoothies are prepared can easily transform into a bar for events.”