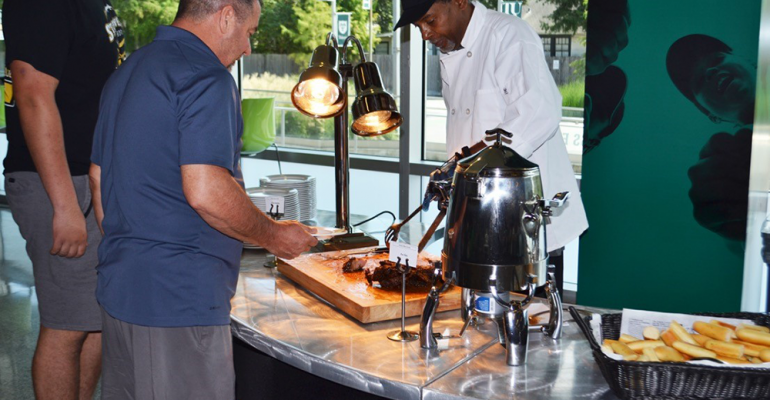 The Green Wave Grille not only gives the school’s athletes what they need in terms of nutrition but also serves as an extra meal site for all other members of the campus community.

In the arms race to attract recruits to university sports teams, one immediately thinks of heavyweights like the University of Alabama, which recently unveiled a new athletic dining facility that it believes will help nail down commitments while giving its student athletes a venue to get optimum nutritional support. But it’s not just the Alabamas of the world that invest in facilities for their student athletes, as was most recently shown by the opening of a sparkling new athletic dining facility at Tulane University. Tulane may not quite have Alabama’s national prominence when it comes to sports, but it nevertheless takes its responsibilities to its athletic programs just as seriously.

The new dining facility, called Green Wave Grille, is located on the first floor of Yulman Stadium on the school’s New Orleans campus and is designed to equip Tulane’s athletes with proper nutrition, game-ready facilities and opportunities for professional growth and advancement. Operated by campus dining services provider Sodexo, it features protein carving stations, fueling stations, cook-to-order specialty dish stations, as well as travel meals developed by regional Sodexo dietitian Kelsey Rosenbaum and veteran chef Scott Goodstal, who has worked with athletic departments and students for 26 years to ensure their success on the field and in the classroom. 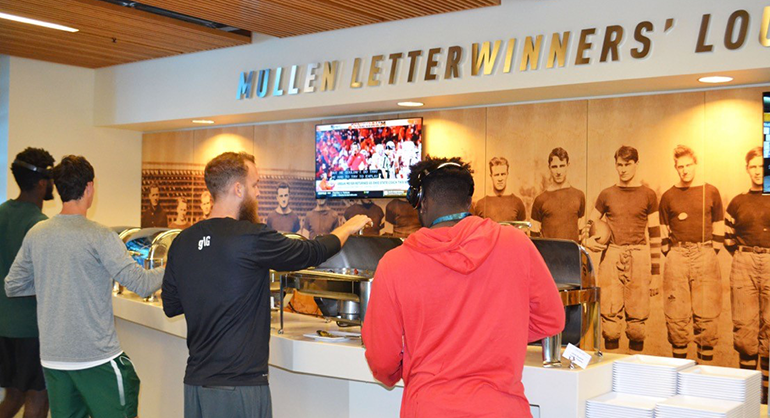 The all-you-care-to-eat venue is open to both student-athletes—who are required to dine there—and the rest of the campus community.

Boasting a full kitchen, dining areas and prep space, the 14,811-square-foot venue is also available to the entire Tulane community. That is a key consideration as Tulane’s other currently available dining facilities are straining to meet the needs of the campus.

“We are currently constructing a beautiful new dining hall that will be opening next July,” says Kate Simon, assistant director of marketing & communications for Tulane Campus Services, “but right now we are serving the majority of our students from a small, 50-year-old dining facility that really can’t handle the amount of students who need to go through it every day. So one of our big initiatives in the past year or so has been to kind of distribute the dining model.”

Hence, the university has been deploying food trucks and opening new venues in other parts of the campus, including the athletic areas.

“The majority of our dining operations are in the center of campus, where they have most of the resident halls,” explains William Hudlow, Sodexo’s general manager at Tulane. “Athletics is on the north side and we’ve been asked by the university to activate [more dining options in] these areas.”

“Athletics had space [for more dining venues] and had pre-planned for some sort of foodservice, but the space had been underutilized since we opened our stadium in 2014,” notes Chris Maitre, senior associate athletics director of business & operations. “We had pitched this proposal around 2016 and finally got off the ground about four months ago. We had the space, we had the interest and the university had the need and Sodexo has been a great partner in getting it up and running.”

Green Wave Grille is an all-you-care-to-eat dining venue with over a dozen serving stations emphasizing proteins, vegetables, starches, and healthy beverages like water, tea and isotonic drinks. There is a vegan station and a carving station where whole-muscle meats are served in accordance with Sodexo’s Peak Performance concept.

What you won't find much of, Maitre stresses, are fried foods or high-sugar sweets, neither of them particularly conducive to high-level athletic performance.

Tulane supports 17 scholarship sports involving 380 student athletes and some 150 coaches and staff, with the athletes required to eat at Green Wave Grille not just because of its optimum athlete-focused menu but also as a bonding experience, Maitre notes.

“Here, they can eat with their teammates and coaches, and we wanted to promote that culture of a family, and how better to do that than eating together. That’s why all of our tables are in the round, so that you’re constantly facing each other.”

The majority of diners at Green Wave Grille so far have been athletes as the eatery is located in the part of campus where their activities are concentrated. The 5:30 a.m. opening of the Fuel Station is designed to meet the needs of early-rising runners and others who have to start their daily routines in the pre-dawn hours, for example.

However, the rest of the student body is starting to get the message as well as word filters out from the athlete community.

“We’ve noticed a lot of our student athletes bringing in their friends for dinner,” Maitre offers. He notes that earlier in the day, the general student body tends to stay in the other parts of the campus where residences and classrooms are located, but in the evening, they are freer to wander. Meanwhile, the athletes generally finish up their training activities in late morning and use the Green Wave Grille for getting lunch.

“The football team is off the field by 10:30 so they can roll in to lunch around 11 and then go to class,” he says. The [convenient location] is also very important for our coaches because they don’t have to spend time finding something to eat.”

Not that they’d want to, given the general feeling about the quality of the food at Green Wave Grille.

“It’s as good as any we’ve seen for team meals at hotel banquet facilities and restaurants we’ve gone to before for team meals,” Maitre says. “We can also bring recruits into the space because it shows the culture and family aspects of our program and we get great comments from recruits and their families about it.”