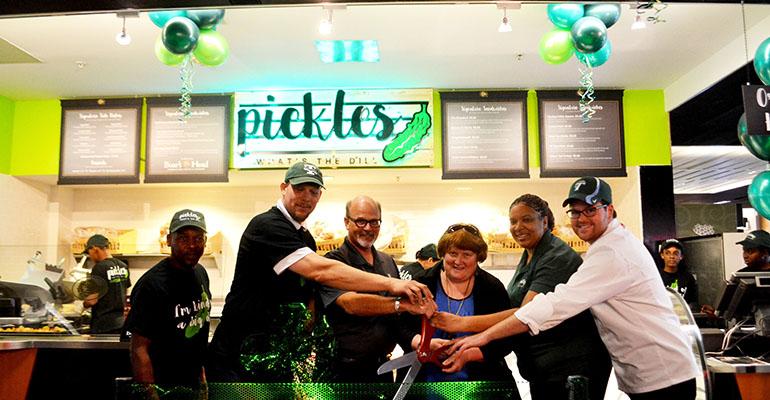 When customers started losing interest in the national sandwich chain at Tulane University’s Lavin-Bernick Center, Dining Services General Manager Thomas Beckmann knew it was time for a change. But instead of just replacing one national brand with another, he decided to try something completely different. “We didn’t want to go down the Subway tree because it would be the same thing over and over. We needed a concept,” he says.

So Beckmann and his team, which is managed by Sodexo, started conducting extensive market research to figure out what might work best. That’s when they learned something surprising: Of the 13,000-some students who attend Tulane, more than a third are from the Northeast. To give those customers something that tasted a little bit closer to home, they opened Pickles, an authentic New York-style deli, this fall.

But can a deli situated on a New Orleans college campus actually be the real deal? Beckmann and Marketing Specialist Linda Lien-Ribardi say yes—as long as you’re willing to put in the work. “We have really good delis in New Orleans, so we went to them to get a feel for what they’re doing,” Beckmann says. The fact that Director of Retail Jason Fibble grew up in Brooklyn helped, too. “He understands what it is about a deli that makes it good,” Beckmann says.

But it isn’t just gigantic, mouthwatering sandwiches that help capture the true deli essence. Pickles takes its side dishes seriously, too. Using locally grown Kirby cucumbers, the kitchen churns out nearly 100 gallons of housemade dill, spicy and butter chip pickles every week. “We take the cucumbers, cut them in the morning and do a hot speed pickling so the pickles are ready in two hours and they’re really fresh,” Beckmann says. Crunchy, ruffle-cut potato chips are also fried daily. And just like a real corner deli, Pickles sells sliced meats, cheese and salads—including egg salad, chicken salad, pasta salad, tuna salad, potato salad and coleslaw—by the pound. Those account for around 10 percent of sales right now—a number that Beckmann believes will likely increase as the holidays get closer.

And to make sure the décor matched the food, Lien-Ribardi took steps to create the type of homemade atmosphere you might find at a neighborhood joint.  “We went for a more rustic look,” she says. “We incorporated a lot of handwritten fonts and chalkboard.” The sandwiches, which are made fresh in front of customers, are even wrapped in Pickles-branded butcher paper.

The only thing about Pickles that isn’t true to the New York deli experience? The prices. Even though Pickles uses premium meats and cheeses and sources much of its produce locally, every sandwich on the menu runs less than $10, and students can pay with their meal plan dollars. The meats, cheeses and salads sold by the pound cost 10 to 20 percent below what local competitors charge. “We’re offering Boars Head meats and cheeses below the supermarket price—we’re not here to make a whole lot of money on that,” Beckmann says.

And perhaps not surprisingly, the operation has been a hit since day one. Students have been spreading an enthusiastic word on social media platforms like Twitter. And everyone seems to like it more than the chain that used to be there. “Transactions and sales have doubled compared to the old national brand,” Beckmann says.