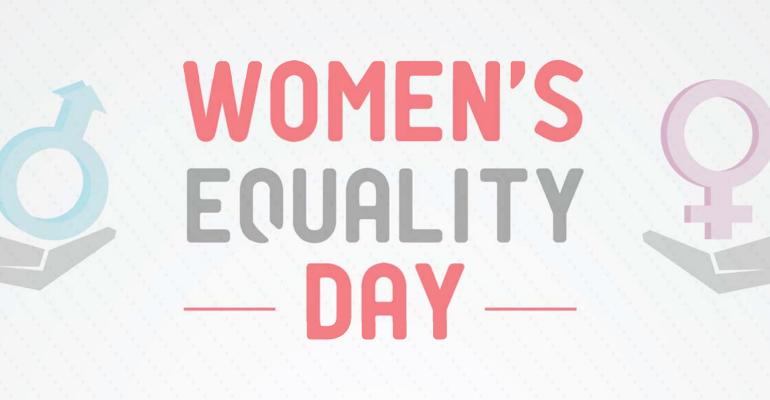 Recent Women’s Equality Day event focuses on empowerment, culinary excellence and iconic plates by pioneering female chefs. Plus: A top chef at Cal Dining shares her views on work-life balance, challenges, the importance of mentors and why there aren’t enough women in professional kitchens.

For the second year, the Cal Dining team at UC Berkeley has marked Women’s Equality Day by highlighting the top women chefs on campus, the mentors and culinary heroes who lifted them up and the women rising through the ranks in the kitchen now.

The event is a winning combination of high-level food and heightened awareness.

“We had this event last year and it was a popular one with the students, so we had to bring it back again this year,” says Mary Ferrer, executive chef for Crossroads dining hall at UC Berkeley and one of the stars of the event.

Ferrer’s career path took several turns before she landed at Berkeley: In the 1980s, she worked as a technician on mainframe computers, then ended up in culinary school after a mathematics degree and a flight attendant job that sparked her interest in the cuisines of the world. Almost 14 years ago, “I got a job working at UC Davis as a cook, and then after about six months started working at UC Berkeley,” she says. “Here at Cal, I worked my way up from cook to senior cook to sous chef, and was promoted to executive chef in 2011.”

Ferrer is a working mom who attributes much of her success to the support of other strong working moms like Ida Shen, former associate director and executive chef at Berkeley.

“She’s a person I admired…she, too, was a busy working mom and chef,” Ferrer says. “She wasn’t afraid to run the dish room when we were short staffed, she’s a well-rounded chef in terms of her cooking abilities and food knowledge and she helped me gain the confidence I needed to apply for my present position as unit executive chef.”

Ferrer and Shen are still in contact, and the poached halibut with vegetable hash Ferrer cooked for this event was originally a competition dish the two chefs created for the Gilroy Garlic Festival.

UC Berkeley Assistant Director of Culinary Jose Martinez says he hopes events like this will foster even more support for the women in the UC Berkeley kitchens.

“We try to empower and get feedback from the women chefs of Cal Dining,” Martinez says. We try to celebrate them. We want to let people know who’s cooking, who programs the food that they eat…women have a great impact in foodservice.”

Ferrer and Martinez agree that noncommercial foodservice, with its high volume, can be a tough environment for any chef.

“In the college or university setting, it’s even hotter and tougher because we focus on volume,” he says. “In an 80- or 100-seat restaurant, you can be more creative and put more attention to detail. In this setting, it’s harder. We’re cooking for 15,000 just in the dining halls.”

“I know for me, it was very challenging when I first moved to the unit I work at now,” Ferrer says. “It is the largest and we provide over 5,000 meals per day. The great thing about it is that I’m a woman chef with all front-of-the-house women managers. We do support each other.” Martinez adds that stepping out of the daily grind with culinary showcase events like this “helps me develop sous chefs to executive chefs,” he adds.

While events like this are great, there’s still work to be done in order to welcome more women chefs into the field, Ferrer says.

“The majority of cooks in our kitchen at Crossroads Dining Commons are men. In fact, out of the 25 cooks we have, only four are women,” she says. “Not sure why this happens. In culinary school, at least more than half of my graduating class were women.”

Challenges can come in the form of societal expectations, workplace norms and the struggle to find work-life balance.

“I really feel for women in the kitchen,” she says. “If you really want to move up, you almost have to put your personal life aside and hopefully have an understanding partner who is willing to support you in that endeavor. I was lucky. These days, I don’t have to work as much of the long hours anymore, usually getting home in time to eat dinner with my family.”

Drawing from her life experiences, Ferrer hopes to help blaze a trail for other women chefs to chart their own success, “since I know what it’s like to raise a child and have to give my work responsibilities priority, I don’t want women to have to sacrifice their personal life for their work.”

For her own team, “if it’s time off they need, I usually am pretty easygoing about giving them time off,” she says, touching on another important shift that’s necessary to women’s equality: “I see a lot more men in our kitchen taking more responsibility in raising their own children and not just leaving it to their partners. At least we’re moving in the right direction.”