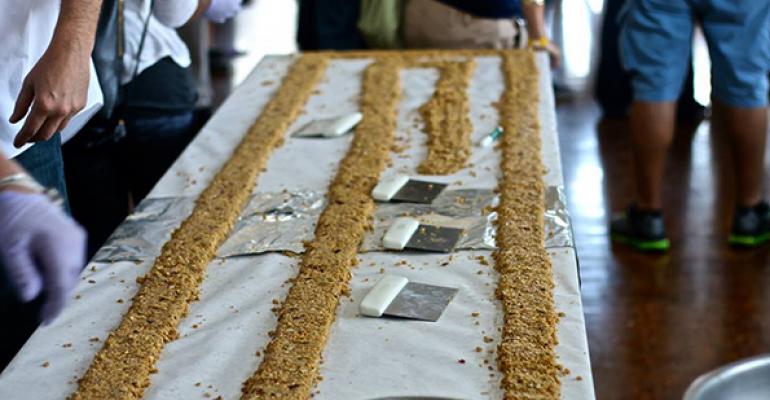 <p>GOING THE DISTANCE: During the recent Pacific Region NACUFS at UC Santa Cruz, this 420-foot granola bar was the star.</p>
News & Trends>Colleges & Universities

At 420 feet, this peanut-butter honey granola bar tastes great and makes it into Guinness World Records.

A “crunchy granola” kind of vibe is to be expected in California, but the bakery team at the University of California, Santa Cruz has taken it further than anyone by creating a 420-foot granola bar—the longest in the world.

Last week, UC Santa Cruz was host to the Pacific Region NACUFS conference, and attendees volunteered to help construct the record-breaking granola bar. The process took just over an hour, but Mark Langlais, bakery manager (pictured, at right), had been working on the recipe for months beforehand, with lots of trial and error.

“The recipe was made to produce 50 feet to a batch,” Langlais says. To make all 420 feet, the recipe required 50 pounds of oatmeal, 20 pounds of diced almonds, 15 pounds of peanuts, 60 pounds of brown sugar and more than 20 pounds of dried cranberries and golden raisins.

The granola bar was meant to be eaten, not just get into the record books, Langlais adds. “I really wanted it to taste good.”

The bar was a no-bake style, so it had an almost brownie-like/cookie dough texture and a sweet, peanut buttery flavor.

The granola team sketched out the dimensions of the bar on butcher paper spread out on tables that circled around the College Nine and Ten dining hall (photo, below by Alex Dana, Porter Khouw Consulting). Measurements for width were specified by Guinness World Records.

“We allowed about a quarter inch extra for error to make sure the whole bar was the right size,” Langlais says.

Excitement built as the bar began to take shape under the watchful eye of Philip Robertson, adjudicator for Guinness World Records.

“The Guinness Book of World Records people who came out were celebrating with us, because the last couple things they went to check out didn’t end up breaking any records,” says Scott Berlin, director of dining and hospitality services.

The previous granola bar record had been just 30 feet, so UC Santa Cruz’s bar went far beyond that.

Celebrity chef/campus food influencer Jet Tila was on hand to help with the logistics of the granola bar.