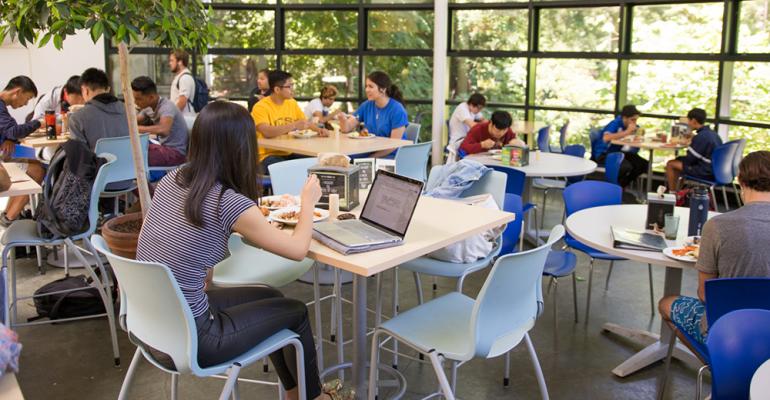 In order to offer more cultural diversity in its campus food plan, the University of California, Santa Cruz (UCSC) now serves halal proteins at every meal in all of its residential dining halls. “Two years ago, UCSC’s senior leadership came to me with the goal of accommodating more students by offering halal and kosher choices,” says William Prime, director of dining and hospitality services. “We decided to start with halal because it has less restrictions than kosher meals.”

“Halal,” Arabic for “permissible,” describes food that adheres to Islamic dietary prescriptions such as no pork or alcohol, and meat and poultry that is butchered according to specific requirements. “In 2015, a Muslim student approached me about serving halal proteins as he was forced to be vegetarian during the week and then eat meat at home on the weekend,” says Prime. “Back then, sourcing halal was challenging for us in terms of cost and availability.” A red icon signals dishes that are made with halal-certified proteins.

UC Santa Cruz Dining began introducing a few halal items in its five all-you-care-to-eat dining halls at the start of the last academic year. Prime says the halal chicken patties, chicken nuggets and seekh kebabs were well received, so this year they went further by offering halal items at every meal in each dining hall. As opposed to offering halal alternatives to entrees, proteins are simply being switched to halal certified with no change to the existing menu. “For example, spaghetti bolognese is made with halal ground beef,” says Prime. “Students don’t taste a difference, but they are aware that other students can now enjoy the dish, which is a positive association.”

Just as there are menu icons for gluten-free or vegan, halal foods are designated by a red icon to help students find halal chicken nuggets, chicken patties, and seekh kebab and entrees made with halal whole-muscle cuts, ground beef and halal chicken thigh meat. “University of California’s strategic sourcing means that when vendors come up for a bid, the ability to butcher halal can be a deciding factor for some campuses like ours,” says Prime. “Between that process and the growth of demand for halal products, prices have come down. We’re also saving money by using a lot of plant-based options on our menus, so we are better able to afford halal.”

Beyond using vendors that can supply both conventional and halal protein, Prime says they adjusted some existing entrees to make them halal. “We used to serve a Korean flank steak with sauce made with mirin wine, so now we make it without to avoid alcohol restrictions,” says Prime. “We also worked closely with the school’s Muslim Student Association to get clarification on certain vinegars, soy sauce and other fermented items to make sure we are meeting their needs.”

Beyond the residential dining halls, UC Santa Cruz Dining also serves halal burgers at its two retail cafes, Banana Joe’s and Owl’s Nest. “Sometimes our vendor is short on halal meat and I tell them to not send us conventional meat as a substitute, because we don’t want to lose the trust of halal-observing students who expect to be able to eat those burgers,” says Prime.

Halal food is served at all five UCSC residential dining halls, and burgers are available at its two retail cafes.

In another move to accommodate the campus’s Muslim community, UC Santa Cruz Dining has also created a meal plan specific to those observing Ramadan, a holy month where Muslims fast from dawn to dusk. “Our freshman and sophomores are required to be on a meal plan. During Ramadan, we didn’t want Muslim students to worry that they were paying for an all-you-care-to-eat seven-day meal plan in which they couldn’t eat breakfast before sunrise and had to eat dinner late,” says Prime. “So we created Spring 60, a reduced plan of 60 meals in which students come in late night to eat dinner and then take home a box of breakfast items to eat in the early morning before we open.”

While the consistent halal selection has been a welcomed change, it has created new challenges for students eating kosher. “Very recently, we’ve heard from kosher students who are more able to eat conventional proteins than halal,” says Prime. “While it will take at least two to three years to create a dedicated space to produce orthodox kosher meals in which all in-house products are kosher and there is no mixing of warewashing, we are currently working on a plan with our local rabbi to see how we can do kosher-style items in the near future.”