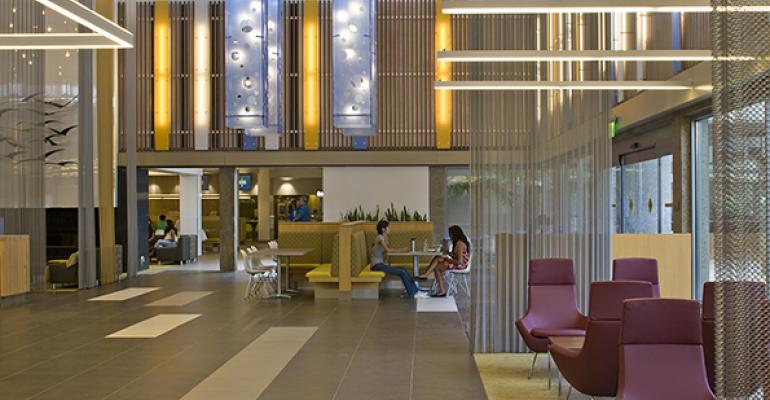 The University of California San Diego’s (UCSD) newly renovated dining hall, 64°, proves that thinking inside the box definitely has its rewards.

“Plaza Café, the predecessor to 64°, was designed in a different era of on-campus foodservice,” says Steve Casad, director of culinary and market services at UCSD. “The massive back-of-house kitchen was built as a bulk commissary and bake shop and it took up the majority of the building’s footprint. The servery, built with tray slides in a big U, epitomized cafeteria-style service. And the ‘big box’ dining room was cavernous with no real defined space.”

Beyond being dated—Revelle Dining Commons was built in 1966—the café was also in need of some major equipment and infrastructure improvements including seismic upgrades and a new HVAC system. Those things, coupled with increased housing capacity in the neighborhood, necessitated a dining facility equipped to provide higher volume and better service.

“64° offers students a fluid and interactive dining space that highlights food and cooking,” Casad says. “There are plenty of ‘sticky spaces’ for students to congregate as well as a market that provides grab-and-go options.”

Construction was completed in approximately six months and cost just over $12 million.