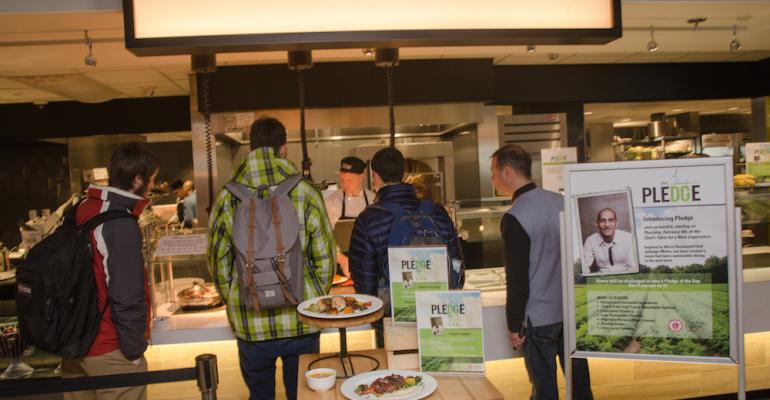 <p>Students who dine at the Chef&#39;s Table station in UMass&#39; Blue Wall food court are asked to make a pledge to make one change in their behavior.</p>
News & Trends>Colleges & Universities

Once a week, the Chef's Table at the Blue Wall asks customers to make one change in their behavior.

One day each week, customers entering the Blue Wall retail dining court on the campus of the University of Massachusetts-Amherst see a sign that asks them to make one change in their behavior: "I will reduce the amount of waste I create today," “I will give up meat today,” “I will go to the gym” and so forth.

The initiative is the result of a partnership between UMass Dining and celebrity chef Jehangir Mehta and his Chef Jehangir Pledge, which grew out a conversation at last year’s Chef Culinary Conference between Mehta and Blue Wall Manager Van Sullivan.

The program kicked off in February at the 11-station Blue Wall, winner of the Best Renovation Concept Award in the 2015 FM Best Concept Awards competition, and is staged one day a week.

So far, much of the focus of The Pledge has been centered around the Chef’s Table, which typically offers an upscale, plated meal at lunch. On days when Chef Jehangir Pledge is staged, the station’s menu is composed of items in which the ingredients are either ultra local or have been gleaned from other Blue Wall stations: for instance, the end pieces from meats and cheeses that were sliced at Deli Delish being used to create a chef's salad; croutons made from cut-up pizza crusts; and oatmeal left over from breakfast combined with whipped cream and other ingredients to make a pudding.

The use of leftovers is not soft-pedaled either.

"We let the students know," Sullivan says. "We are telling them that we're doing what we can to reduce waste, and we ask them to do the same."

But using leftovers doesn't mean that customers are being cheated, as every effort is made to provide high-quality foods. On a typical day, for example, customers were offered a choice of spiced sauteed Atlantic perch with basil tomato salad, roasted eggplant chutney, cranberry quinoa and maple beef soup, or an ultra local fennel sirloin with cranberry quinoa and roasted winter vegetables.

Mehta says the idea came from his own upbringing, and he thought Dining Services would be willing to try it because "they like to push boundaries. They like to take things to the next level.

"I didn't grow up poor, but I saw poverty on a daily basis," adds Mehta, who grew up in Mumbai, India. "We never would throw things out; we never wanted to waste things."

Pledge was an instant hit, with more than 200 covers coming from the Chef's Table on the program’s first day, according to Sullivan, who says that Pledge may be expanded given its popularity.

The program is a testament to the power of collaboration, he concludes." Jehangir is magic. He gave us an idea we might not have come up with on our own, and we probably wouldn't have aimed as high as he did."

Best Renovation Concept: The Blue Wall at the University of Massachusetts-Amherst
Aug 18, 2015