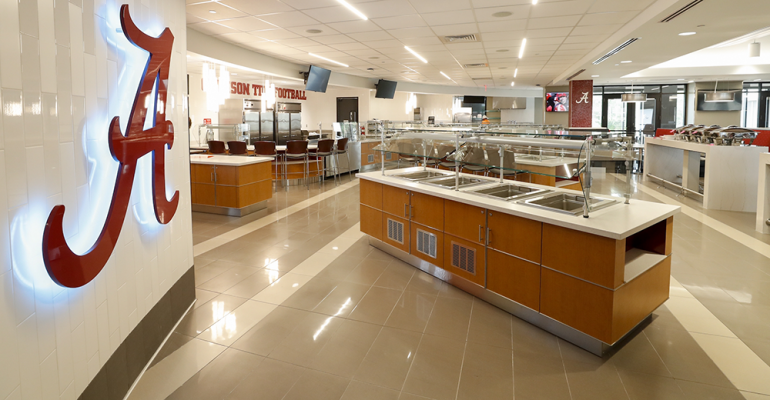 School’s sports teams now have one of the finest food and nutrition resources in the country at their disposal.

The University of Alabama (UA) Crimson Tide has won the national championship in football five times in this century, by far the most by any school in the country in that span. And they can now also enjoy championship level food and nutrition services, as UA opened a brand new $15 million, 25,000-square-foot athletic dining facility this summer to serve all of the university’s nearly 700 male and female athletes, who compete in 18 sports, from football and men’s and women’s basketball to gymnastics and swimming, plus all athletic department staff.

The two-floor structure can accommodate up to 500 at a time and boasts 10 cook-to-order food stations offering everything from burrito bowls and salads to tacos, grilled cheese sandwiches and smoothies. 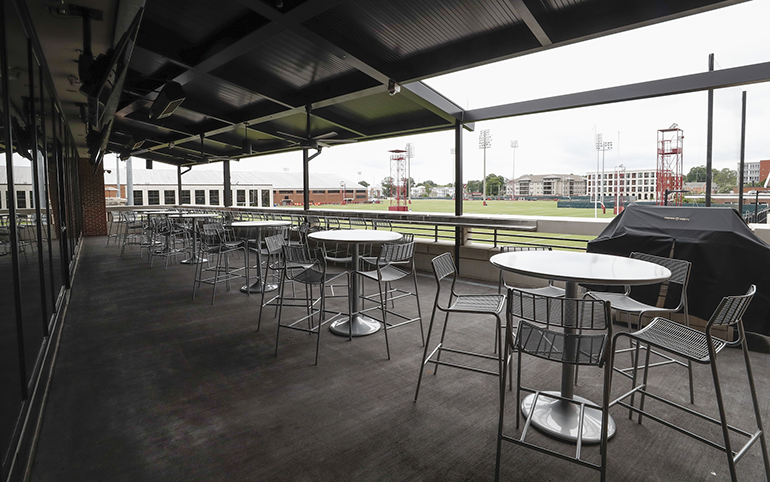 Both levels of the athletic dining facility have outside seating, a favorite place for athletes to hang out, except at the height of the Alabama summer.

The first floor has serving stations such as a flat grill, a smoothie bar, three stations with induction burners to make stir frys, grain bowls and similar dishes and a deli with a Turbo Chef oven for making flatbreads, pizzas, grilled sandwiches and so forth. The upper level includes another smoothie bar, a flat grill for making things like grilled cheese sandwiches, to-order stir frys and fried rice dishes, another deli station, a traditional hot line entrée station and a salad station where the diner specifies the ingredients and it’s made to order.

The upper level is a bit more expansive and is intended to accommodate special gatherings.

“The downstairs is for everybody,” explains Amy Bragg, director of performance nutrition for UA Athletics. “So it’s open for all teams, all athletes who are on variously different schedules. Upstairs we have a private dining space and demo kitchen, which we use for our small-team pre-game meals, for nutrition education meetings and special events. We’ll also have recruiting events upstairs.”

It also accommodates the football team, the university’s largest in terms of numbers. So, Bragg explains, that would be where the team and staff gather for a meal before going on the road, something that may involve more than 200 people.

“We need to feed that many people in less than 50 minutes,” she says.

The upstairs also has the nutritionist offices and DXA units that are used to assess body composition.

Each food station has a flat screen display that identifies what’s being offered there, and the individual diner can then customize from the array of ingredients.

Each UA athlete, from the 300-plus pound football lineman to the diminutive gymnast, has his or her own nutrition plan to guide them toward the foods they should be eating and in what portions. 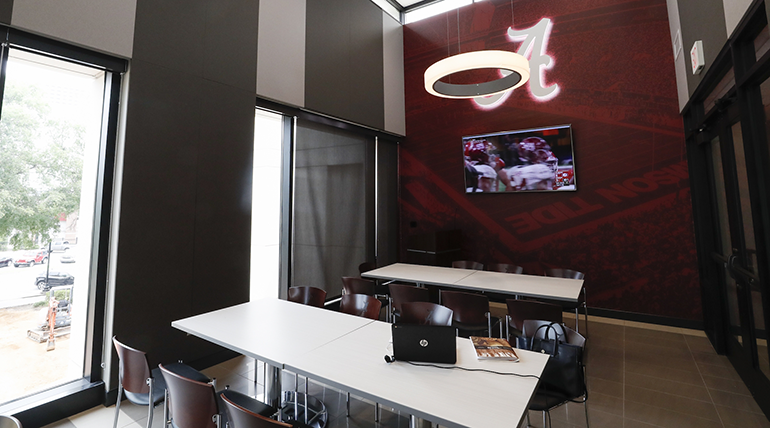 The facility has more than 50 flat screen TVs athletes and staff can watch while eating or relaxing.

Bragg says burrito bowls and grilled cheese sandwiches, which can be customized with ingredients like ham, avocado and tomatoes, are among the more popular items. “The pasta bar is also very popular, with its shrimp, chicken and various vegetables and different sauces,” she offers.

Plant-based dining isn’t very big at the facility as of now, Bragg notes, since most athletes have high protein intake needs. Less than a dozen UA athletes are vegetarians or vegans.

“It’s really hard to be an elite athlete and be a vegetarian and get enough protein to maintain your lean mass and be competitive,” she explains. “But,” she adds, “we would certainly have the facilities and resources to manage someone like that” if needed.

The meats that are consumed are lean so that they are low in fat while being high in protein.

The menu variety is extensive because athletes’ tastes and preferences are varied, Bragg notes. UA draws athletes from around the country and around the world, she says, all with regional or cultural food and taste preferences that the dining facility strives to accommodate within the context of good nutrition.

There is also “a big spectrum of where athletes are in terms of nutrition knowledge when they get here,” she adds. “Some are very tuned in—a lot of your swimmers, your track athletes and your gymnasts know a lot about nutrition when they come in because they have to be”—while others may need more information. In addition to nutrition counseling, the facility offers teaching kitchen services and instruction to the athletes on how to prepare the right foods for themselves.

The athletic dining facility is open seven days a week. A brunch meal is available from around 7:30 a.m. to early afternoon during the week and dinner is generally from 5 p.m. to 8 p.m. Monday to Thursday. A Fuel Center station offers snacks, salads, sandwiches, fruit-to-go, fruit cups, beverages and yogurt parfaits from 7:30 a.m. to 8 p.m. during the week and 8 a.m. to kickoff on Saturdays. Its Sunday hours are 8 a.m. to 8 p.m.

“It’s an investment in the development of the athletes,” Bragg summarizes. “Not only is it a nice place to go and a place to get a good meal that’s both nutritious and made the way you want, but it’s also essential in the development of the athlete because just doing the [physical] workouts doesn’t necessarily build the body you want if you don’t have the nutrition to go with it.”