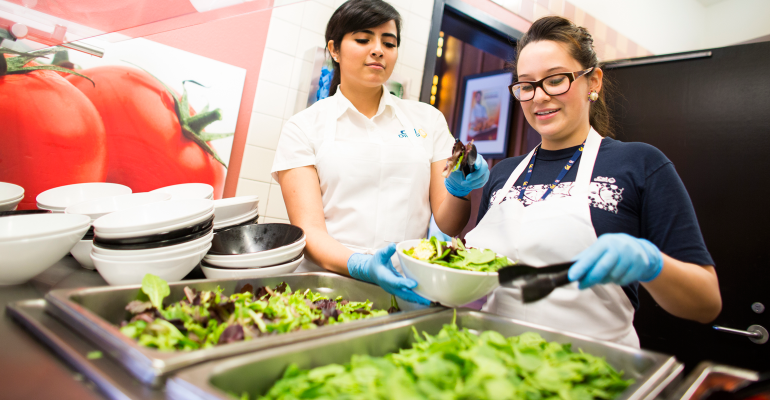 Next steps include education and training.

In 2009, the University of California, which includes 10 campuses and five medical centers, committed to purchasing 20 percent of its food from sustainable sources by 2020. According to its recently released 2016 Annual Report on Sustainable Practices, most of the UC system has met that goal early for the second year in a row.

“There were some setbacks in 2016,” says Tim Galarneau, food systems education & research associate specialist at UC Santa Cruz’s Center for Agroecology & Sustainable Food Systems. “Avian flu meant our sustainable source of eggs shut down for four to six months. California’s drought meant there was unique water restrictions that limited productivity and affected prices. Some campuses had to work through changes in operations and vendors that slowed down procurement and tracking of sustainable food products.”

Despite those major challenges, the university still achieved its 2020 goal early and executed some campus-specific successes in sustainability as well. In 2016, UCLA became the largest fair trade university in the nation and UC Santa Barbara launched a Food, Nutrition and Basic Skills Program of 36 workshops that include whole-system mindfulness.

“Going above 20 percent procurement means attaining sustainable alternatives for higher cost foods,” say Galarneau. Until up recently, UC could not find a sustainable beef patty, and students eat a lot of burgers. “But we finally found a vendor and after a site survey where those that design our menus were able to see, taste and ask questions, we’re hopeful that we’ve secured a source for sustainable beef.”

Mozzarella has been another challenging food to source. “Students eat a lot of pizza. We go through about $30,000 of cheese a month at just one campus,” says Galarneau. “Finding a sustainable mozzarella would be huge but with organic dairy, the price premium is so high, it is often too prohibitive to purchase.” Beyond burgers and pizza, students also consume large amounts of coffee, a food item that UC sources through unique partnerships. “At UC Santa Cruz, we have a sole source contract with community Agricultural Network (CAN) farmer cooperatives in Mexico and Central America. Our students visit and research these vendors ultimately bringing the coffee producers up to connect with the university community and local roasters.” Galarneau says that while traditional coffee results in a 50-cents-per-pound price return, CAN’s direct fair trade model means farmers get over $3 per pound.

“Part of our approach is to show that there are procurement policies that can support and uplift communities,” says Galarneau, who says with the 2020 goal reached, the next step is about education and training. To that end, each campus runs green practice modules that explain why UC is committed to sustainability as well as the campuses’ procurement and waste stream elements that are involved.

“At UC Santa Cruz, we have a team of six students that audit $10 million of buying in dining every year,” says Galarneau. “To get academic credit, they meet on a quarterly basis with the food director, chefs and managers to research products, product shifts and supply chain analysis. It’s another important step as we look at our universities as living labs in order to empower students, faculty and staff to be involved in campus sustainability.”

As California is such a large state, Galarneau says they can set up two different bids on the same need to reflect the geography. They also make sure small vendors have an inroad to a large university like the UC system by offering sole-source contracts in which a farmer can work with one campus before going bigger.

With its massive annual procurement budget, UC can often inspire vendors to move away from harmful products such as palm oil or shrink wrap in order to qualify as a vendor in its system. “When we put more money towards sustainable food and production systems, we want that commitment and that demand to signal a shift in the supply chain,” says Galarneau. “We want to be conscious of the cradle-to-grave life cycles of the products we serve at UC – everything from procurement to packaging to delivery to waste.”

The future of the college dining hall in the age of coronavirus
Jul 30, 2020