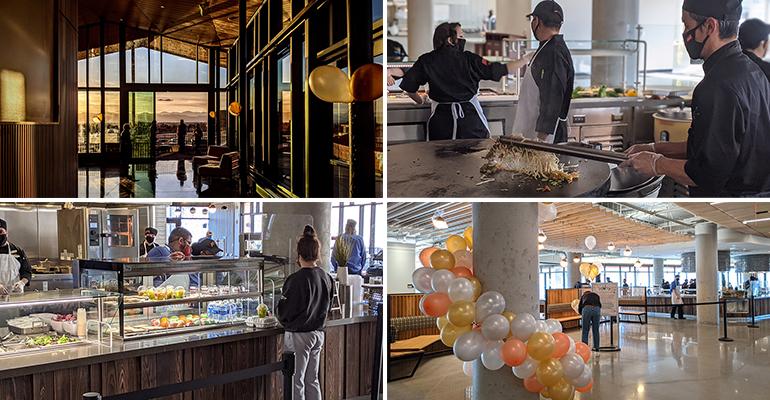 January brought not only a new year with hope of better things after a 2020 filled with crisis and disruption at the University of Denver (UD), but a new campus centerpiece as the school’s new Community Commons complex opened. The four-story, 135,000-square-foot structure includes a number of dining venues, including the Rebecca Chopp Grand Central Market with its nine food stations on the second floor, as well as a unit of a restaurant brand called rollin’ and bowlin’ on the first floor that menus smoothies and acai bowls.

A Starbucks outlet is planned to open later this spring while the top floor will offer a buffet lunch once the coronavirus pandemic passes but now hosts a happy hour service between 4 p.m. and 7 p.m. with free hors d’oeuvres and a cash bar and spectacular views of the Denver skyline and the surrounding mountains. Plans call for programming and other events to be held in the space between 7 p.m. and 10 p.m. once that becomes allowable.

“This is a project that began in 2016 and its purpose is to create a central facility that would be open to all students, to undergraduates who are required to be on a meal plan as well as upperclassmen, graduate students, faculty and staff,” says Ira Simon, district manager for Sodexo, which operates dining on the UD campus. “Centralizing it allowed for the inclusiveness because we were operating three smaller residential dining halls where the footprint was really small. By centralizing in this location, we are able to really expand our options and variety and meet the challenges we were having in the other facilities.”

Two of those outlets have now been converted to retail environments that will receive major upgrades this summer and where students can now use the cash component of their meal plans.

The Community Commons, built on the footprint of what had been a building called Driscoll North that was part of the school’s student center complex, had originally been scheduled for a September 2020 opening, but that was delayed to January 2021 due to the COVID pandemic. Driscoll South containing the campus bookstore and various offices remains in place across a pedestrian bridge that connects it to the new Community Commons.

The Rebecca Chopp Grand Central Market is named for the school’s chancellor at the time the Community Commons project was conceived, Simon notes.

“It really started with a strategic plan that Sodexo developed in 2015-2016 based on student surveys and focus groups, stakeholder meetings and [input from] 15 experts we had come to campus,” he explains. “We looked at what we had and the challenges we were having. Meanwhile, the university had been talking about renovating this Driscoll North facility for several years, so we suggested we put this central dining hall in there because we had done something similar at Gonzaga University, which had just opened successfully around that time.”

Initially, Simon thought the university would only renovate the existing Driscoll North structure, “but then they did what the administration called the ‘Denver Advantage’ that not only built this new facility that doubled the existing space but also built a new residence hall, the Dimond Family Residential Village and the Burwell Career Center, so they built three buildings under this one project. It was all part of their effort to create more value for students, create more services and more housing, which was designed to [accommodate] third- and fourth-year students who wanted to live on campus because of the cost of living in Denver.”

The need to integrate those upperclassmen into the underclassman-heavy culture of the campus necessitated a change in the approach to dining, Simon further explains.

“To make [the Community Commons] accessible to everyone, to make it feel like a community center, we made it an a la carte facility. We moved from what was a traditional all-you-care-to-eat dining program to a total a la carte program where students can still use their meal plan to get a meal equivalency.”

He notes that the traditional all-you-care-to-eat dining halls had drawn very few upperclassmen or staff, but he now anticipates as much as a quarter of the traffic in the Rebecca Chopp to consist of non-meal-plan holders because of the greater flexibility of the a la carte approach. Happily, it is also an approach that meshes better with COVID-related restrictions as the a la carte model depends a lot less on self-serve than all-you-care-to-eat.

The Grand Market is composed of four themed spaces—Brightside, The Hearth, Mountainview and Courtyard—each with its own characteristics such as a fireplace, large windows or a particular view of campus and the surroundings, and each is designed to provide a full meal equivalency— entrée, three sides and beverage—if that is what the customer wants.

The Rebecca Chopp Market is open continuously between 7 a.m. and 7:30 p.m. On Mondays through Thursdays, it reopens for a late-night service between 8:30 p.m. and 10 p.m.

Here’s a photo tour of the Community Commons.