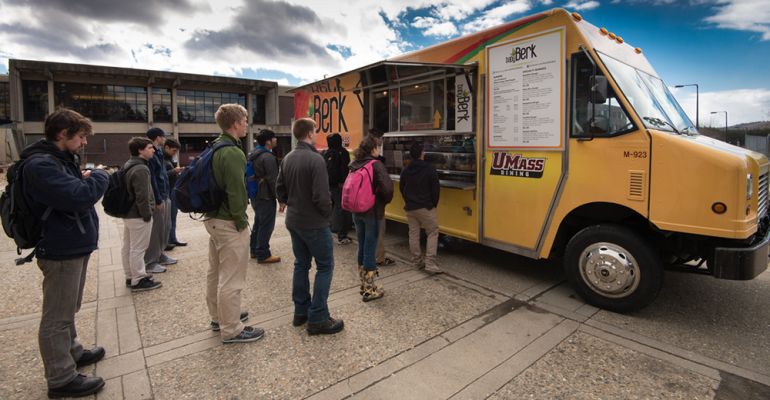 UMass Dining
The BabyBerk food truck that generally serves UMass students will this summer also serve as a free meal outlet for youngsters around the Amherst area.
News & Trends>Colleges & Universities

UMass is partnering with the state education department and the USDA to bring free lunches to five locations around Amherst.

The University of Massachusetts at Amherst (UMass) is deploying its BabyBerk campus food truck to the surrounding community this summer to serve free meals to youngsters age 18 and under. The initiative is a partnership among the university, the Massachusetts Department of Elementary & Secondary Education (DESE) and the USDA to expand summer meal availability to youngsters in the western part of the state.

BabyBerk will make stops every Monday, Wednesday and Friday between June 25 and August 10 (except July 4) at five separate locations around Amherst, serving healthy but kid-friendly selections that also satisfy federal school meal regulations. The selections are prepared and assembled in the UMass retail commissary kitchen.

The relationship started last November when Ken Toong, executive director of auxiliary services at UMass, had a chance conversation with DESE Commissioner Jeffrey Riley about the state department’s plans to extend the USDA-funded summer feeding program in the western parts of the state (including Amherst), and Toong offered his department’s assistance as a partner in the program.

Entrees scheduled to be offered from BabyBerk in the early going include all-natural turkey sandwich with local cheddar on whole wheat, antibiotic-free grilled chicken Caesar salad wrap and grilled cheese and local tomato on whole wheat. They are scheduled to be served with sides like local apples, carrots and hummus and whole fruit frozen sorbet.

“We’re able to use the same components we currently use [in the regular college meal program], though some of the quantities may vary,” notes Van Sullivan, director of retail dining at UMass, “but all the ingredients already exist in our portfolio.”

The meals are mostly pre-packaged but can be modified on the truck to accommodate special requests dealing with allergen issues and dietary needs, Sullivan says. The ingredients themselves reflect the UMass Dining program’s commitment to local sourcing, quality ingredients and scratch preparation. For example, the turkey breast in the turkey sandwiches is roasted in the commissary kitchen, not purchased precooked.

The program allows BabyBerk to be utilized more fully over the summer when, while it is not completely idle—it still serves at campus summer camps, conferences and athletic events—it is definitely a lot less busy than during the school year, when it operates as an additional daily retail dining outlet on the busy, crowded campus.

The program also gives five UMass Dining employees some work over a time when they would otherwise be idled as plans call for the commissary to produce some 600 summer meals for each day the truck will be out in the community.

As for suggestions that the planned choices might not appeal to kids, Sullivan has only this to say: “They have no clue,” he asserts. “This is what we do all day. We make healthy, delicious food that people actually want. I’m very excited to be part of this.”